I ended up watching two eps of Fairy Tail in a row, because the "guild war" arc was obviously coming to a close and I was out of willpower.

It ended about the way I'd expected, and it was frickin' epic.

Even better, I got this excellent frame grab of Erza: 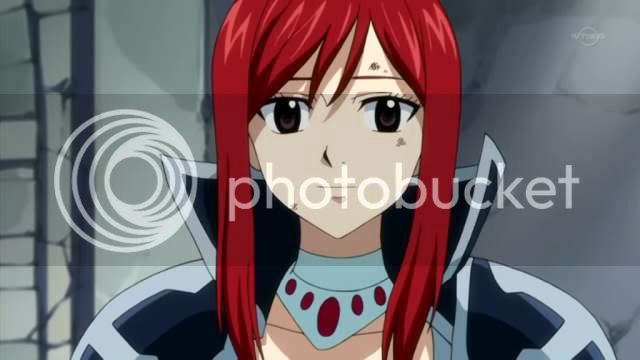 That'll be a desktop after I get tired of the Misaki one. A gentle expression is very rare for her--she's so serious--but all I'll say is that she has good reason to look this way in the middle of a big fight.

This series is a keeper. Holy crap is it good.

In the middle of a quest in WoW, my computer abruptly shut itself off again.

I would like it if Windows would pop up a window saying "Your machine is overheating! Shutting down in..." and then do it, rather than just abruptly knock me out of my damn game.

But it only happens in WoW, because WoW requires a lot of horsepower.

Anyway: my solution was to get the computer off the floor. I disconnected everything and rearranged the computer setup, so the computer is now next to the desk on the printer stand, and the scanner/printer is next to the stereo. It works well enough, though I couldn't move the stereo to where I wanted it and had to settle for having the printer on the far side of it. When I have a chance to get a good-length hunk of speaker wire, I'll do it then--yes, yet another speaker wire is too damn short. *sigh*

Anyway, I blew the dust out of the heat sinks and moved the computer, and I think it ought to run a bit cooler now. And it ought to suck less cat hair into the vents. Win-win.

...but I need to get some potting compound. See, the main fan that cools the processor runs off a plug on the motherboard, for speed control, but somehow the clip that holds the plug in place got munged. It comes loose too easily; I want to stick it down with something but I don't want to use something that could ruin the motherboard. Potting compound won't attack the epoxy that the motherboard is made of.

Right now I have it trapped between the mobo and the 3rd hard drive, so it can't go anywhere, but I'd really like to have a more permanent solution.

Another option is to connect the fan to the power supply, so it's on when the power's on, but that would make the machine awfully noisy. I like having the fans spin up only when things get too warm.

Of course, now I'm chasing down keyboard noises again--every time I type, something makes an annoying sound, and it only happens when I type. *sigh*

We'll see how my rearrangement helps, if at all.

Of course, because of all of this, I'm up way past my bedtime again. There's stuff to do, and I'm not getting any of it done. *sigh*

My brother-in-law called Thu night (last night, I guess, but it's still "tonight" to me) to thank me for sending him a cartoon on DVD. Here's the cartoon:

Ages ago, when I was much younger and he was here visiting my sister, that cartoon happened to be on Tom and Jerry one afternoon. My brother-in-law loved that cartoon, especially Mssr. Renoir's recitation of the parade. (First iteration of that starts about 2:19 if you don't want to watch the whole thing.)

When he and my sister were up here for Mom's funeral, he was telling me about how he'd tried to find it, and started doing the song, and so I joined in--to the amusement of my niece (the one who likes anime and manga and RPGs and stuff).

Anyway, after a friend sent me a link to this Tom and Jerry cartoon--several weeks after--it occurred to me that Hey! Perhaps that other cartoon might be on YouTube!

Yeah. And it was the work of a minute to set up the transfer to DVD; I do that for anime all the time, anyway, so I just recorded it off the computer's outputs.

...stuck it in a jewel case and mailed it without explanation or warning. My brother-in-law loved it.

Anyway, so we talked for about an hour about a bunch of stuff and had a grand old time. I needed that.

At the same time, I sent my niece 10 DVDs of anime--fansubs all--and I wonder if she's gotten them yet? I'll have to write a note.

Best do that, and then hit the hay, I guess.

During the Bush administration, we were repeatedly told that though unemployment was down, they were all "low-quality" jobs--stocking shelves, wiping butts, waiting tables, you know, unskilled labor positions. Unemployment was below 6% but everyone was hurting and the economy was in horrible shape, and it was All Bush's Fault.

We're not hearing that now, of course, from anyone in the mainstream media. Oh no! Now it's all about the numbers, and if you question them it's probably because you're a racist. Even if nearly all the new jobs are part-time, and the unemployment rate's drop is primarily coming from a shrink in the workforce, it's still a sign that we're in the middle of a robust economic recovery.

Because, after all, there's a Democrat in the White House.

Newt wants to be President, and I gotta haul out the Yotsuba pic again.

That link explains why, and I don't need to amplify it; I'm just going to blockquote the same text they do:

o far, he’s angered the conservative intelligentsia with an ostentatious defense of ethanol subsidies, botched the announcement of his exploratory committee, bombed on explanations for his repeated adultery and three marriages, been seen as flip-flopping three times on Libya within a month and awkwardly warned about a future atheist America dominated by Islamic radicals.

He was a great Speaker of the House while it lasted, but he's just not President material. Sorry, Newt.

Sarah Palin on Obama's energy policy. A worthy read. Now that is what Presidential material looks like.

Advice Goddess gives us yet another sharia horror story. There are plenty to go around.

People in the "moral equivalency" crowd like to talk about the horrors that Christianity perpetrated on people during the Medieval era, and say that it's therefore no better than islam.

One difference: islam did the same kind of things way back then...and still do them today. Christianity does not. Europe underwent this little thing they call "the Renaissance" where logic and reason began to outweigh superstition and even religion...and back when it was still called "natural philosophy" people realized that science and religion weren't incompatible, that you could have faith in the divinity of Jesus while accepting that the Earth revolves around the Sun. It was a bit of a struggle, but the Church finally realized that scientific fact cannot do anything to faith, and Europe went on to conquer the world. Its openness is its strength.

But the koran doesn't allow islam to follow a similar path. The koran is supposed to be the literal word of God and any deviation from it at all--any whatsoever--is punishable by death, because deviating from it is apostasy and apostasy carries a minimum punishment of death.

So islam remains rooted in the 12th century, and it kills 14-year-old girls for the crime of being raped by older, married men.

Would you like to live to be 200 if you had to be bright yellow to do it? I don't mean some weird racist way of saying "happy asian", either; I mean literally bright yellow. Like a lemon.

I'm not kidding; look at this howler:

"The chemical, Hydrofluorosilicic acid is used to add fluoride to the plants water."

Corrected: "The chemical, hydrofluorosilicic acid, is used to add fluoride to the plant's water."

"As plant employees evactuated, crews began suiting up, working quickly to stop the leak that had begun eating through concrete."

Speaking of lowered unemployment, I got a note today from #2, and they've decided they want to try me out for two weeks.

It's not a solid job offer as such; it's more of a kind of trial period. I'd wager that Og talked me up a bit too much and they want to see if there's anything behind the hype. *sigh*

I realized that I was kind of dreading this. I can't be fussy about jobs; I need one and here's one that's virtually fallen into my lap--and it's a career, not just making burgers or putting boxes on shelves. It's robotics and CNC machines and serious portable skills that will only be in greater demand as time goes on, because labor certainly ain't gonna get any damn cheaper any time soon.

Fuck--it's also R&D, is what it is, figuring out how to use robots to do things that are currently done by hand.

But it's a long way from the bunker; and I can live very cheaply here, at least until the place is sold. There are logistical issues with having a job that far away, serious ones, and all the solutions for those issues revolve around spending lots of money--probably the majority of my paycheck will go into making it possible for me to work there.

Still, it's a job, and it's a good job, and beggars can't be choosers. So I've got to take the offer, and I've got to do my damnedest to make it work, because there simply is no other path forward.

So I e-mailed Og and told him about getting the e-mail from #2, and what does he tell me?

He tells me that he knew about this well in advance--a couple weeks or so--but that he'd been sworn to secrecy.

So my reply began approximately thus:

They made the decision THAT QUICKLY?

Dang. I thought I bombed that shit. I was on my face with fatigue and no one but [owner] ever asked me any questions--and that part was just 10 minutes long and HE did most of the talking. Only last night I told my brother-in-law that I was pretty sure I'd crapped myself at that interview.

Only apparently I did not, after all, do any such thing, not if they made the decision that soon.

Apparently I'm a lousy judge of what makes a good interview, because I was confident that my interview at Og's employer had landed me a job, only it didn't...and a crapinous interview done on 3 hours of sleep was successful.

...of course, the employers also had differing criteria for what makes a good employee. Still.

Og has told me that once I get a job in his industry, I'll never need a real suit ever again except for things like weddings and funerals--he interviewed for his present job in a sport coat and khakis, and the work is dirty enough that his company has a uniform service. Even haircuts are unimportant, as long as you keep the spaghetti out of the machinery.

This does a couple of things for me. Even if the trial period doesn't work out, for whatever reason, it'll be a couple weeks' worth of pay--assuming they pay me the figure we discussed at the interview, that'll take care of the next health insurance payment, and a month's worth of groceries, so that's fine.

And if it does work out--well. I have to get an apartment down there with Internet access, and find ways to do a bunch of other things, and help my siblings get the house ready for sale and-and-and.

I knew that getting a job would cause as many problems as it solved. Well, that's life.
Collapse