I've got nothing else to talk about today, so it's going to be about the Mists of Pandaria expansion to WoW.

Ormus (on Wyrmrest Accord) has spent some time questing in the lowest-level zone of Pandaria. This zone is named The Jade Forest and it's gorgeous, once you get past the first two subzones. The first subzone is a war zone; the second is a swamp. Beyond them, wow.

The music in Jade Forest is also really good.

I specify this all because I haven't seen any of the rest of the continent yet. It doesn't matter, either. Jade Forest is so beautiful it's now surpassed Ashenvale as my exemplar of beautiful scenery in WoW.

Another neat thing: the other day while I was playing a thunderstorm brewed up. There was actual lightning, and--even better!--the thunder had an appropriate delay before sounding. Just like in real life!

At 2:02 AM on Tuesday morning (release day, the 25th) I made Ukyô, the pandaren monk. I played the character until I'd gotten her out of the panda starting area and had done a few quests in Elwynn Forest; then I was reminded of the new pet battle system and jumped on Ormus to try that out.

Generally speaking, so far the monk character class is pretty decent. Ukyô is now 15th level and will shortly begin queueing for randoms, so we'll see how she does in a dungeon setting. Blizzard paid a lot of attention to the panda animations, too.

The pet battle system is more fun than I expected it to be.

As is typical for a new expansion pack, toons that are new to the area are grossly underpowered until they get new equipment from the new expansion. Ormus was routinely getting flattened; he could easily handle one foe, and could usually survive fighting two, but if another one showed up, he was likely to die. Balancing this is the fact that Ormus is an alchemist, and right away--at a skill of 500--you get the "Alchemist's Rejuvenation Potion", which requires a single unit of green tea leaves and a potion flask to make. That potion restores 60,000 health and 60,000 mana, which is a good jolt when your bars are getting low. And green tea is everywhere, in good quantity, such that I now have about 100 units (five full stacks) of green tea.

(Not to mention that Ormus has a couple perks that give him a bonus when using potions he knows how to make, so the 60k healing he gets turns into at least 75k.)

Ormus now has almost all new equipment. I think this is the first time I've had a toon whose equipment matched and was color-coordinated. The helm is a coolie hat, which is hilarious. But the nice thing is, Ormus can now survive combat with more than one foe at at time.

And the zone is so beautiful, I've hardly used any transportation. I usually have Ormus hoof it, because the scenery is so pretty and the music is so nice.

If I can pry myself away from Pandaria, I'm going to go back to Northrend and see how I fare against baddies there--Ormus is now overpowered for Icecrown--but I do not expect to stay long.

As for me, I've slept and slept more. I woke up this morning at seven, but after feeding the cats and having a snack I went back to bed for a few more hours and woke up at noon. At least now I don't feel dead tired, which is good as I have business to attend to.

Got to go to the bank and pull more money out of the IRA, for one thing. I'm sincerely hoping this'll be the last time I have to do that. I don't want to spend this money, damn it, but if I want to have things like electricity and Internet and food I've got to pay the people who provide me with those things. They won't do it for free.

Once done at the bank, then, my next task is to go to the store and exchange the two jars of salsa I bought. See, there's another big Red Gold (tomato products) promotion, so I got these jars of salsa for some egregiously low price. It was a "buy ten, use this coupon!" deal; I think I might have paid $1.19 each for the salsa and the six cans of diced tomatos were about $0.40 apiece.

Six cans of tomatos, two jars of salsa, two bottles of ketchup--already at sale prices, and then $0.50 per unit off with the coupon when you buy ten. And it's all good stuff; how can you go wrong?

...but I grabbed hot salsa rather than mild. So, I need to exchange it. And ask the store for an application for the produce clerk position they have open.

And when that's all done, the next step is to come home and jump on those on-line job applications, because I've got to get that dealt with soonest. Then, pay my bills. And after all that then I can decide what I want to do.

I stopped by the Yamaha dealership the other day to enquire about my cylinder, but it's not done yet. More and more I wish I'd gone to the guy south of town, rather than the Yamaha dealership--but it's really not this guy's fault. His son was in a pretty bad motorcycle accident, and obviously he's had a lot on his plate. It's not like I need the thing, either. It'd just be nice if I could ride the dirt bike before it starts snowing....

65, I might add, real-world MPG, where I'm not being careful about how much fuel I'm using. But I'd wager I couldn't do much better than that even if I were careful.

I have noticed, however, that the bike starts to misbehave when the bike has drained the gas tank by one gallon. I'm not sure why that would be, because there are supposed to be about two usable gallons of gas before one must switch to "reserve". But every time I encounter this, I think about removing the strainer entirely and plumbing a filter into the fuel line. This thought usually lasts until I fill the tank again, at which point I forget all about it until the next time.

This time, though, I actually ran the thing low enough that I had to switch on "reserve".

Now I must get up and go do errands. *sigh*

So I got the motorcycle out and filled the tires (both were flat, again) and checked the oil. Started her up, rode to the bank...and when I got off the bike there and got my folder out of the trunk, and checked to make sure the lid had latched, the whole back end of the trunk lifted into the air.

...closer inspection revealed that the luggage rack had cracked on both sides, almost all the way clear through the tubing. A thin hinge of metal was holding it on the bike.

Put my folder back in the trunk and carefully rode home.

Let the pics tell the story:

The motorcycle is only really usable as recreation if I don't have a way to carry things, so I pulled the rack off the bike. Went to the bank, then stopped at the welding shop here in town; I'm told it'll be ready by 11 AM tomorrow.

I'm pretty depressed by having to take more money out of my IRA. (Comcast was supposed to hire me, dag nab it...) I'm really hoping one of the leads I got yesterday bears some fruit, because WTF. Having yet another thing go wrong with the motorcycle does not help matters, even if it is something relatively simple to have repaired.

I figure that once I get it back I might clean up the welds, then take it to a nearby place that does powder coating and have that done. Maybe a nice metallic blue, to match the gas tank.

...re-chroming it would probably cost more than the rack is worth.

Anyway, the guy's going to put some tubing inside the tubing to reinforce it, so hopefully this won't happen again. Still, it's an annoyance I didn't need.

I then went to the grocery store. The position I was going to apply for has been filled already--big surprise. I was able to exchange the salsa, anyway.

Lastly, I got a couple of shorter bolts for the bike so I can ride it without the luggage rack. The bolts that hold the luggage rack on also hold on the rear turn signals and the seat; the rest is left as an exercise for the student.

While I'm at it, here's pics from the El-Hazard Brain Transplant:

Old case on the left, new case (empty) on the right.

Old case disassembled, with parts laid out. Mobo on the left, others nearby for scale. I'm still amazed at how small the thing is even as it has enough computing horsepower to do just about anything that's not graphics-intensive. 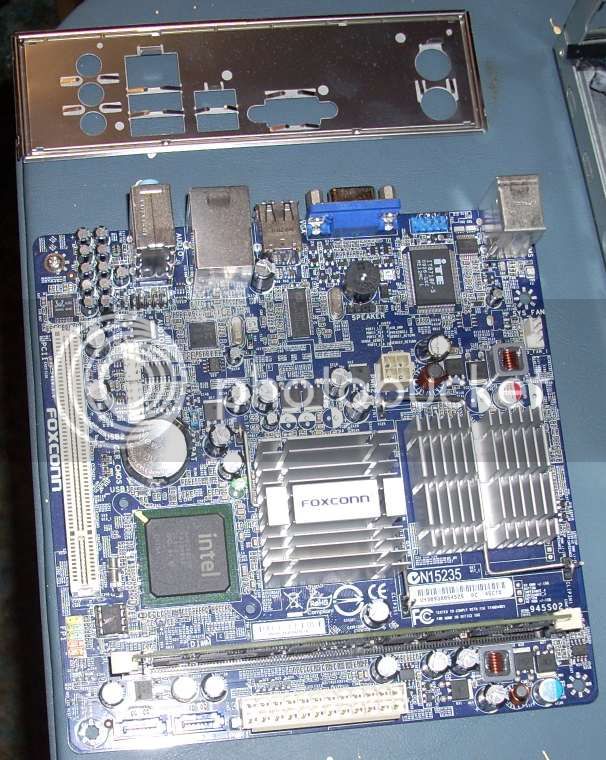 The motherboard itself. I didn't get a picture of it when I originally built El-Hazard, so here it is.

The new case, ready for installation of components. The rectangular piece of metal on the right goes into the case and is where one of the drive rails for the optical drive go; but it has to be removable in order for one to be able to install the motherboard. The case is a pretty nice design, I have to say, and it was actually cheaper than the original case was.

The new case has a much smaller footprint, but it lacks the extra 3.5" drive bay that the original case has. The only complaint I've got is that the new case has an active cooling fan in the power supply, and it's a little noisy. Probably I will not notice it when El-Hazard is working as a set-top box in the family room, though.

Around all this I have to decide what I'm having for dinner tonight, and I don't feel like doing a dag-blasted thing. What I really want to do is to lay in bed and have my personal chef with big tits bring me fajitas and a margerita while wearing only an apron. Since that would require me winning approximately half a billion dollars in the Powerball, after taxes, I guess I might as well wish for a pony while I'm about it.

And Lemonzen would get a mite upset with me if that actually happened, so I guess the pony would be a safer wish to boot.

Seen on Borepatch we have this cat cartoon that made me laugh out loud:

I have an interview with Michael's (distribution center work) on Monday at 4 PM.

Cut-and-paste from the e-mail I sent to Lemonzen:

The only drawback: they hire you as a temp for 6 months. Probably they decide based on your performance in that time whether or not to hire you full-time.

But WTF, if it means I have a job for the next six months, it's better than nothing!! And if I can do the job as well as I did the job at Target they WILL hire me full-time.