A bunch of links about the short video showing a Trump look-alike taking down a guy with the CNN logo over his face.

CNN is being targeted by the on-line community after it forced the creator of the video to apologize.

There's some question about the chain of events regarding that apology, according to someone from CNN, claiming that CNN didn't coerce the apology from the creator of the clip.

But if you look at CNN's own report on the event, they say this:

CNN is not publishing "HanA**holeSolo's" name because he is a private citizen who has issued an extensive statement of apology, showed his remorse by saying he has taken down all his offending posts, and because he said he is not going to repeat this ugly behavior on social media again. In addition, he said his statement could serve as an example to others not to do the same.
CNN reserves the right to publish his identity should any of that change.

Basically, CNN doxxed the guy, and is blackmailing him.

And--oh, dear God--it looks as if CNN doxxed and blackmailed the wrong person who--even worse!--may be a minor. One person, further on in the comments, adds that CNN may have broken some laws.

Finally, other organizations are saying that the blackmail is "extremely unethical".

Think about it: if it's actually newsworthy, a news organization should publish information. If that information is not newsworthy, there should be no question that it's not published. But to hold publication of the information over someone's head as a way of silencing him? I find it ironic that an organization which depends on freedom of expression is acting to silence expression it doesn't like. Ironic, hypocritical, unethical...and 100% typical of leftists.

And here's another digest of the story. This paragraph is apt:

Well, Gentlemen, how do you like a news organization going out and hunting down the individual private citizen responsible for creating a joke at their expense, forcing him to delete his online comments and opinions, and extracting a promise from him never in future to express sentiments or opinions that CNN doesn't like, under penalty of public targeting and exposure?

And here we have "The Most Busted Name in News". "That this whole disgusting matter can be construed as extortion doesn't seem to have occurred to CNN, although it certainly has to just about everyone else."

And so today, the anti-CNN memes are flowing like a river at flood stage.

No matter how you look at all this, it looks bad for CNN. 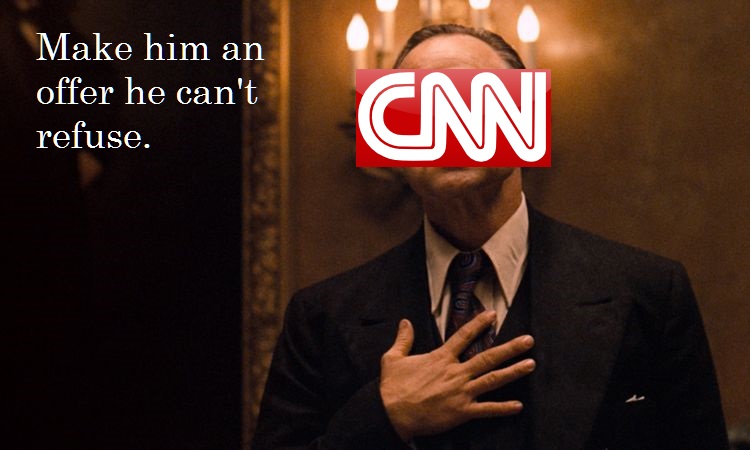 Looks like Secret Service grilled Kathy Griffin for an hour over her "Trump's severed head" tweet gaffe. That's what happens; the SS reviews every case where a President's life is threatened, no matter how innocuous it may appear, because they take presidential security very seriously.

I recall hearing a story about a kid who wrote a President a letter. The kid was young (probably under 7 or 8 years old) and ended the letter with "Love, Billy" (probably not his real name) but in the letter said he wished the President would die. That kid was investigated. That's how seriously they take the security of the President.

So, no, not surprised at all.

Volvo to commit suicide in two years. They say they're going all-electric in 2019. Bye, Volvo.

Last night, while my wife and I were having fun lighting fireworks, the local Blockwart came by and yelled at us that he would take it "real personal" if anything landed on his roof. He said that last year, stuff from our yard ended up on his roof--we didn't set any off last year, we were at her mother's house--and "Fireworks are illegal! You know that!" And if we kept going, he'd call the cops.

...all this while WWIII was taking place all around us. Yeah. What a dick.

Anyway, we lit off our big finale cakes, and then retired, only to have the people across the street light some big stuff--so I grabbed a few things, went out front, and lit 'em there, "sharing the wealth" as it were. What a grand fun evening my wife and I had! Despite the nazi prick! The cops did eventually come, but we were done by then, and all the cops did was to say, "Okay, we've had a complaint...." And meanwhile, *bang* *pow* *crackle* all around.

I mention this because fireworks are illegal in Los Angeles and that's pretty much how things are around here, too.

In fact, there is a great solution to Illinois' budget crisis: legalize fireworks. Do you know how much income tax Indiana collects on fireworks from people living in Illinois on fireworks? Do you have any idea how much that is? Not to mention New Year's and whatever holidays might prompt people to set off fireworks. I mean, come on. They legalized gambling solely so they could tax it. Why not do the same with fireworks? (And think of all the people who would be employed at fireworks stores.)

And it's not like Illinois couldn't use the money. Because the big tax increase passed in the 13th hour isn't stopping their bond rating downgrade. At least, Moody's is reviewing Illinois to see if a downgrade is warranted. And I wouldn't be surprised if they concluded that it was, because the budget that was passed doesn't fix anything. All it does is raise taxes and kicks the can further down the road.

Well, "comics.com" is no longer working at all well. Whatever they did, when I try to read a comic (and it doesn't matter which one it is) there's a random chance that it'll bomb my browser and it'll refuse to connect for some time afterward. It also screws up my access to Dilbert. Way to go, guys.

This evening around 7:30 we decided to take a dip in the pool.

As we enjoyed it, I realized that the filter wasn't moving much water. I puzzled over it, looking at the hoses and feeling for pressure, and checked for air in the hoses--nothing worked.

Then I thought, "Filter? But it's only been running for two days! You're supposed to get at least a month out of it!"

Still--shut off the pump, pulled the filter, and it was clogged with mucky brown sludge, and immediately I knew what had happened.

Last night, before retiring for the evening, I dumped about 9 ounces of Clorox pool shock into the thing. It seems that you can go one day, maybe two without chemicals, after filling a small temporary pool like this one, but really you should start with the chemistry set right away.

The shock did two things: it killed anything that had entered the water, and it caused non-organic solids to precipitate out...and the Fungal Vale has a LOT of iron and calcium in its water. The water here is very, very hard, and frequently tinged with rust. The filter clogged up with all that non-organic precipitate.

So I took it inside, and sprayed it off with the sink sprayer, and washed all the brown sludge out of it; and once I'd reinstalled it in the pump, the thing merrily pumped away like it had before.

Did a test of it, and the water now shows as having too much chlorine in it (opposite end of the scale from pre-shock, when there was far too little) and it's still as hard as can be. Tomorrow I'm going to check it again and use the app--it's a Chlorox kit that you can use the old-fashioned way, or you can download an app that scans the test strip and analyzes the result, and makes suggestions on how to proceed. I'll try that and we'll see what happens, since so far I haven't found any information on how one treats the water in his pool for an optimal swimming experience.

Once the filter pump was corrected, though, we had a marvelous relaxing time in our little pool. It's amazing how a dip in a swimming pool can just wash away all your stress and make you feel relaxed and happy.

It was probably, in fact, the company I had. Mrs. Fungus likes swimming pools as much as I do, and in fact getting a pool was her idea in the first place.

I have no idea now why I ever resisted it.
Collapse