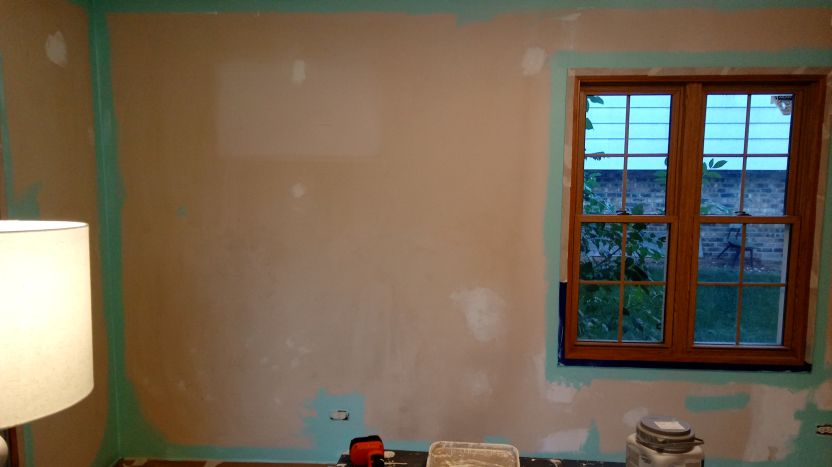 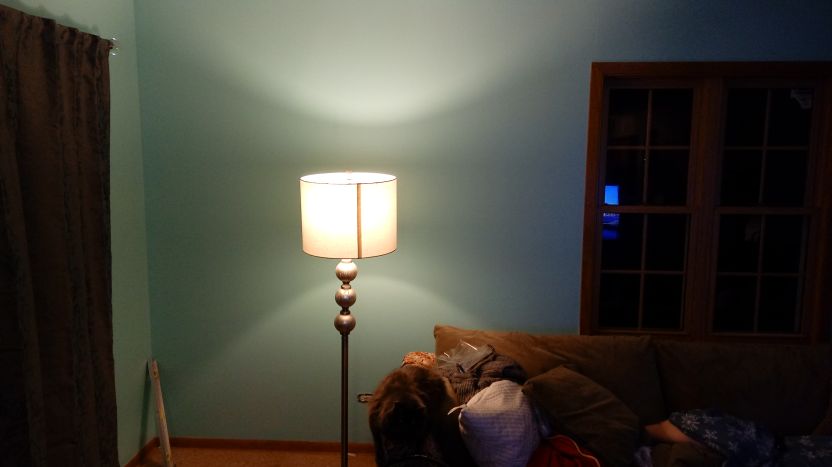 We have a completely different family room now: 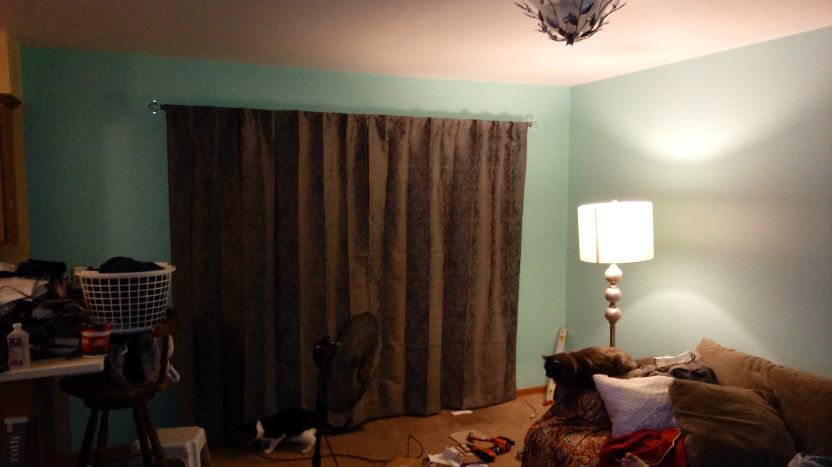 Gone are the forty-year-old Energy Crisis curtains. Gone are the curtain rods which had been on their last legs for at least two and a half decades. The dingy old paint is now covered with brand new paint in a beautiful color.

This morning, the room was the same old drab room it's been for twenty years. Now, it's fresh and vibrant and lovely.

Mrs. Fungus can't stop effusing over it, and to be honest I can't either. It's just such a change and a HUGE RELIEF to have that room repainted.

Left to do: put up the curtains for the south window. I'll do that Saturday, though; I'm beat.

During the day, with both sets of curtains up: 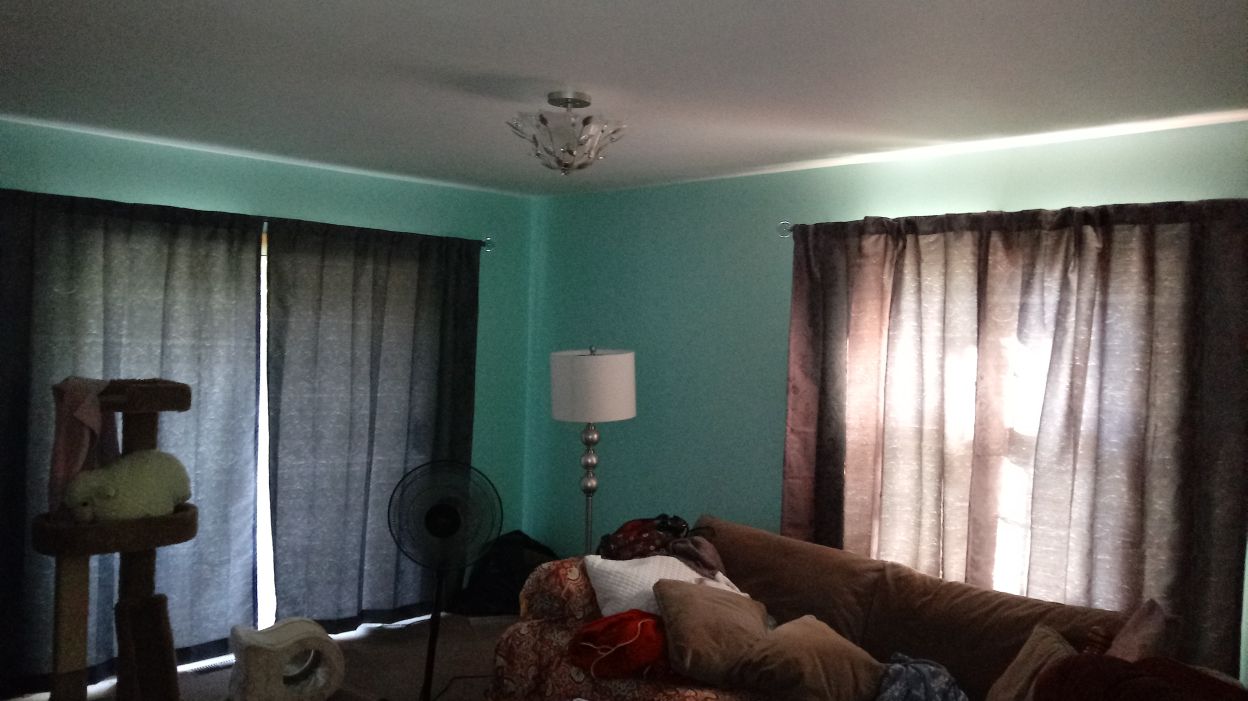 We're getting one more panel for the patio door since two aren't enough. That'll let the curtains hang with some pleating to make them look nice. But overall, we're really pleased with how the family room turned out.

Next up? The computer room. Oh, dear. But we have a lot going on this week, so it probably won't be ready for paint before Wed or Thu of the following week (first week of October, already) at the earliest. There is a lot of prep work to do in here.

Third ep of The Orville was interesting. First pure drama ep, with only a few wisecracks, and to my surprise it didn't turn out quite the way I'd expected it to.

There is one thing I don't understand, though. SPOILER ALERT!

The Moclans are a single-gender species; all of them are male. They have no trouble reproducing (they lay eggs, though it's not explained how) and the driver of Thursday's ep was that Lt. Cmdr Bortus had laid an egg in the second ep, and it hatched, and turned out to be...female. Apparently female Moclans are born once in a while; it happens only seldom but apparently is common enough that we have three examples in one episode.

The episode does not explore why this is; that was ignored in favor of the real issue.

The usual thing to do is for the infant to be surgically reassigned the male sex, and apparently the surgery yields a fertile male (as Bortus' mate, Klyden, was born female, reassigned male sex, and they have a child together). Bortus asked the ship's doctor to perform the surgery, and she refused. The conflict of the episode revolved around whether or not the child would be reassigned the male sex, eventually concluding in a court hearing on Bortus' homeworld.

This was very much like a Star Trek: The Next Generation episode; and I had to keep reminding myself that The Union is not the United Federation of Planets and that Orville is not part of Starfleet.

See--in ST, this all falls under "Prime Directive", meaning that Starfleet does not interfere in the cultures of other races. Ultimate multiculturalism; starship captains have to accommodate the cultures of their crewmen. So if this were ST, and if the Moclans are all male and they surgically alter females at birth to be male, and this has absolutely no effect on the reproductive functioning of the individual, then the ship's doctor would have to accommodate accommodate Bortus' request.

As far as I know, the Union has no "multicultural" requirement, and in fact Captain Mercer makes it plain that he'd break a pile of laws by ordering the doctor to perform the surgery. So far so good; Orville is a ship designed and built by humans, based at Earth, largely crewed by humans--of course its operations would be bounded by human culture. Fair enough.

Where it all goes off the rails, IMHO, is when Bortus calls for a Moclan ship to rendesvous with the Orville, at which point the infant will be transferred to the Moclan ship and the surgery performed. At this point, having seen Rudolph the Red-nosed Reindeer, Bortus has changed his mind and doesn't want his child altered, while Klyden still does; the Moclan captain is insistent that the surgery be performed, but Mercer refuses to release the child. The solution to the impasse is for them all to go to the Moclan homeworld for a tribunal. After "big dramatic trial" scene, complete with "oh look our greatest writer is female" revelation, the tribunal decides that there's no good reason to leave the kid female and orders that the surgery be performed.

I was satisfied with how it worked out. Females are ostracized in Moclan society, and their "greatest writer" lived in an isolated cave in the wilderness to hide the fact that she was female. The fact is that all members of their society (except for a vanishingly small minority) are male. Their reproductive systems--however they work--are built around one sex, and as I said, neither the mechanics nor the tiny incidence of female births are ever explained. When a female is born, the child is made into a male, and he himself won't know the difference unless he is told.

I think the confusing part, for me, was that there was no moralizing. Star Trek would have been making a point--in favor of transsexualism, in favor of nature, in favor of something--but Orville did not. They just told a story: this conflict arose under such-and-such circumstances, and this is how it was resolved.

I mean, the humans in the story were outraged that the Moclans do this thing to their female infants, saying that the child should be given the choice--but compared to the moralizing in even the least-moralizing ST:TNG ep, it was mild to nonexistent. We weren't being told which viewpoint was superior, nor were we told which one to prefer.

I find that refreshing.

The only thing is, I would like to know more about everything here. How do two males mate and lay an egg? Where does the egg form and how is it extruded, particularly when it's about the size of a basketball? Most importantly, what biological function does the female perform when females are completely unnecessary for reproduction?

That last is the biggest question. We're told that one is born "about every 75 years" but we see three in this episode (old, breeding age, and infant) which would seem to belie the rarity stated above.

And why are females not allowed to develop? Why the ostracism? The answer to this question might be interesting in its own right; what if females are rare because they have some kind of ruling function (like the queen in an ant or bee colony) and somewhere in the mists of Moclan history there was a big war to throw off the chains of the matriarchy?

Well, I don't know. But I do know it was an interesting, and refreshing, way to tell a story in a promethean SF world. "Without the leftist propaganda", I mean.
Collapse