Watched Hellraiser 3 last night. "My God--it's made of cheese!" I can't believe that I ever thought these movies would be scary. Of course I believed the hype, something I would not have done were it not for the credulousness of youth--but these movies are so not scary it defies belief. #3 almost has an eerie moment at the end, though, which is a bit of an improvement.

The overarching story is kind of interesting, though, and it's kind of fun to yell, "Don't do that!" to the idiots on the screen, who are merely foils for the villain. Pinhead is the real star of the show, after all, exactly the way Freddy Krueger was the star of the Nightmare on Elm Street series.

It's an interesting way of doing things. You can't root for the villain--he's pure evil--but regardless of how final his defeat seems, you know he'll come back again, and the protagonists of the movie will not. That's probably the real "horror" aspect of the story, that the evil being is never truly vanquished; give it them couple of years, to write and produce the next one, and someone else will be menaced with electrified chains with fishhooks on the ends.

The thing is, the result of falling into Pinhead's hands seems to be just being messily shredded, pretty quickly. In #3 he threatens Terry Farrel (can't remember the character's name, so I substitute the actress' name) with "centuries" of torture--but he never does that; he just tears people apart, even when it happens off-screen. Like in the first movie, when Frank gets it--we see him open the box and get snagged with the chains, and one or two scenes later Pinhead is reassembling the scraps of Frank's face. Supposedly summoning the cenobites (like Pinhead) is the gateway to a sensory adventure where both pain and pleasure are given in abundance, but all we ever see is the messy shredding.

In any case, the movies aren't scary, but there is a modicum of entertainment to be had from them.

Flipped through Netflix last night, trying to see if they had Vicar of Dibley. They did not, worse luck, but my search turned up Shetland. Og has opined repeatedly about how good it is, even though he can't understand a word of dialogue and must use subtitles, so I thought I'd have a gander at the first ep and see how it was.

Well, I can say that I don't have any trouble following the dialogue. The Shetland accent is pretty thick, but it's still English, so that's all right. The big problem I was having was that Maki was playing with his Turbo Scratcher while people were talking.

The Turbo Scratcher was originally purchased in 1998 for Luna. Luna loved the hell out of that thing, and periodically played with it throughout her life. Mrs. Fungus cats, when they came to live here, also loved playing with it. Maki is no different, and being a kitten he can spend long periods of time chasing the ball around and around and around.

But the ball makes this peculiar rumble as it rolls. That's not a problem when it's not 2 AM and your wife is trying to sleep and you can turn up the volume. Otherwise?

...so there I am, trying to understand people talking through thick accents, with grumble rumble grind grind rumble going on. Eventually he got tired and took a nap, perhaps fifteen minutes before the episode ended--at which point my listening comprehension went way up.

But I understood what was happening well enough, and formulated a theory as to the motivation for the first murder. Looking forward to seeing more of this one, because it is entertaining stuff.

I'm not sure what these people are protesting but I do know that any organization that protests against "pedo bashing" is one that decent people wouldn't want to associate with.

Hence my complete lack of surprise that the antifa logo is at the bottom, right next to the NAMBLA logo, which itself is next to the ResistNY logo. And the presence of the "black lives matter" sign.

They're leftists. What do you expect?

Watching a YouTube video of interesting shadows, came across this one: 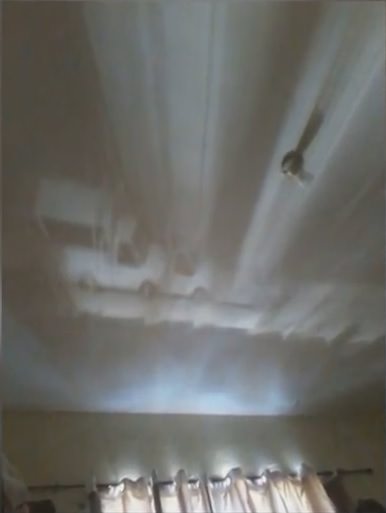 "My curtain cast a shadow that looks like a car," was the caption.

Nope! That's an accidental camera obscura. It's not a shadow but an actual image of a vehicle parked outside your window.

I marveled at that same effect in my old bedroom. When the mail was delivered, I could watch--from my bed, projected onto the upper walls of the room--the mailman deliver the mail, and from the other window I could see cars go by in the street.

It was caused by the narrow slit between the top fo the curtains and the top of the window. A small gap where light could get through, narrow enough to have a focusing effect. It only worked well on bright days with direct sunlight, before noon; it worked in part because the curtains were 1970s energy-efficient insulating "blackout" curtains. It remains pretty dark in the room even on the brightest days.

While fapping around here at the computer--blogging, looking at YouTube, and doing nothing useful--I had two groups of trick-or-treaters come. That's with no decorations up, by the way, so I put out the big plastic pumpkin and plugged it in, and took the screen out of the storm door for easier candy dispensing. Soon I will carve the jack-o-lantern.

And just because all the stores started setting for Christmas two weeks ago, let's have this blast from 1982!

Yep, thirty-five years ago the C64 was on the market! And Commodore released this demo for stores to run during the Christmas season.

Deleted: 45,000 word discussion about how much computer technology has improved since then. Heh.

Read this article on Hackaday about Belkin power strips with 360° rotating plugs that can melt and/or catch fire. Thought, "Dang, that's rotten engineering!" and forgot about it.

...until today, when I was working on sanding the partition wall. And found that the power strip our TV, cable box, and BD player are plugged into has one of these rotating plugs.

"No way," I said, and immediately unplugged it and substituted another power strip. Because I'd read that article, you see.

So--same as the guy in the article--I cut the rotating plug off and substituted a fixed 3-prong plug I'd bought a long time ago, for fixing an old extension cord, I think (which I ended up recycling instead). I'm going to take the rotating plug apart and see if it was ever any danger, but I did note that it is the same model power strip and has the exact same patent number on the plug. So, no, not gonna play with that shit.

I don't see any evidence of melting, either, but--yeah. Not playing around. I had the plug on hand, so why not?

Anyway, the first coat of primer is drying, and tomorrow I'll make a decision about a second coat of primer, or just starting in with the spackling.

Clean the seeds and make sure you get as much pumpkin goo off as possible.

Let the seeds dry completely. This is the secret, the step I never knew about; those seeds must be dry before you take the next step.

2 TBSP of melted butter, or your oil of choice; I would have used butter had I had 2 TBSP of it handy, but I would have needed to break out another stick for that, so I used olive oil. Tossed well, added salt, tossed more, spread on foil on cookie sheet. Dusted a little more salt on.

Oven at 300°. Baked for 20 minutes on middle rack, stirred, placed on top rack for another 25 minutes.

The seeds came out:

The best pumpkin seeds I ever ate, bar none. Even the ones you get in packages are too chewy and too hard. (And too salty.)

Makes me wish I had another pumpkin....
Collapse