No more Shetland to look forward to. Binge-watched the last four eps of the series after putting Mrs. Fungus to bed Friday night, like a bad boy.

For most of the series, I reliably could not tell where the story was going. If I guessed the culprit ahead of the reveal it was because I was using meta-knowledge, but out of all the stories in question I guessed right once.

The third season was one story, but the culprit in the murder that set it all in motion was not revealed until the last fifteen minutes of the sixth and final ep of that season, and no I didn't figure it out.

If there was one thing they did wrong in the series, it was the ham-handed way they crammed a morality play about rape and the effects it has on its victims into the latter half of the third season. But damn, what a story, even so.

I'd like to see more of this, if any is in the offing, but it doesn't look like there will be any.

Plus side: it's based on books, and I could always visit the local library and check 'em out.

The first bit in this Overnight Open Thread at AoSHQ demonstrates why raising the minimum wage causes unemployment. I hate to say this, but that electric motor does not cost any $10 per hour to maintain. Even a cheapass electric fan motor will run for hundreds of hours with no maintenance, costing only the electricity required to run it, and so what you're looking at is, in fact, merely buying the motor and installing it, which is a one-time cost.

That's where the whole thing fails, of course, except as a thought experiment. Depending on how much effort it takes to turn the crank on that machine, a $50 motor would run for a week on $7.25 worth of electricity, and even if you figure that installation of the motor and an appropriate pulley in place of the crank handle, plus a belt, cost $500, that capital investment would still pay for itself in less than two weeks...and thereafter represent a net savings every week of $282.75.

So, yeah: the replacement of labor with capital changes everything, and raising the minimum wage will only accelerate the process.

Always remind yourself that the law is an ass. Okay, we've all watched the police shows where cops read the Miranda warning to the suspects they arrest, though the scene usually cuts after the first clause ("You have the right to remain silent; if you choose to give up that right....") But sometimes they get as far as the second clause, which begins, "You have the right to an attorney."

I mean, according to this decision, someone saying, "I want a lawyer, faggot!" is asking specifically for a gay lawyer, rather than insulting the person he's talking to.

It's a bad and stupid decision over something bleeding obvious, and it's a perversion of civil rights.

Speaking of bad and stupid, Colin Kaepernick is attempting to sue the various team owners of the NFL for "collusion" and "conspiracy".

The grievance claims the league, and its owners, "have colluded to deprive Mr. Kaepernick of employment rights in retaliation for Mr. Kaepernick's leadership and advocacy for equality and social justice and his bringing awareness to peculiar institutions still undermining racial equality in the United States."

Asshat, you don't have any "employment rights". No one has to hire you if they don't want to; just because you're in the top 1% of football players in the United States doesn't mean football teams are required to employ you. The fact that you're in the bottom 50% of that 1% is half the reason you're unemployed; you have too much baggage attached to your name, and as a professional football player, you're mediocre at best. The costs of employing your dumb ass outweigh the benefits.

Sit down--that seems to be your core comptency--and shut the fuck up.

Because it's so tasty it makes you want to punch yourself in the face, that's why. The McRib always comes back, every year, because McDonald's has determined that people will buy lots of them if they limit its run to a couple of months per year. It's a great-tasting sandwich, but you get tired of 'em pretty quickly, and they're messy enough that you can't eat them on the go; you need to stop, sit down, and use both hands and plenty of napkins. That's okay to do a couple times a year, but most of time? No.

The McRib always comes back because it makes money for McDonald's.

A comment here drew my attention. I'll quote some of it here:

It's not just the MSM that is full of crap. It's ALL media, even specialized techno-media.

Case in point: when I was an adolescent (late 60s), I lived and breathed cars. By the time I was in my 20s I had literally thousands of car magazines, and had read every one cover to cover. Then I went to engineering school, and was fortunate enough to get a job as a proving ground test engineer for a Big 3 manufacturer. As part of that job, I got to drive dozens of different cars and trucks from different manufacturers, from all over the world, and all on the same test tracks, and often back to back.

I was shocked, crestfallen, dumbfounded to discover that everything the car magazines had told me was basically ill-informed BS. The cars they liked were often crap. The cars they didn't like were often great. The things they said were important, weren't. The things they thought trivial, weren't. I had wasted 15 years and thousands of dollars (back when a dollar was a dollar) on BS.

Ah, yes, I know what he's talking about. Exactly.

I don't want to delve into the whole "torque versus horsepower" thing again, but I'll mention in passing that the magazine people always gush over horsepower and ignore torque, which is why they rated the mid-90s Dodge Neon higher than the Ford Escort of similar years. Yeah.

No, what this comment reminded me of was the Pontiac Fiero. The kvetching, from car magazines, over the original suspension in that car always made me roll my eyes. I mean, the simple fact is that a 1985 Fiero GT handles like it's on rails; if you know how to drive, that car will do everything you ask of it. Like any mid-engine car you have to watch out for trailing throttle oversteer, but it's got fantastic weight distribution and even the base suspension provides taut and snappy handling. The WS6 suspension is even better.

...but of course, it's not perfect, not like a Porsche or Ferrari. GM built it out of parts it had on hand, so it's garbage. The only good Fiero suspension is the 1988 models.

The 1988 suspension was an improved suspension, yes, which fixed some of the deficits of the early suspension (correcting some--though not all--of the bump steer issue). But it was not the do-all-be-all, and since most drivers never use more than 15-20% of their car's capability, the improvements didn't make a damned bit of difference to the average owner.

Ah, water under the bridge...but there we are.

Man, it's a dreary day today. Rained all morning. *sigh*

Today I finished the partition.

I have four little tasks remaining to have it 100% completed, but we're currently sitting at 99%, and I'll take it.

So: facing eastward, looking at the partition wall. That squarish, ragged hole above the outlets is not mine. I'm going to make it proper size and put the cable/network drop in there: 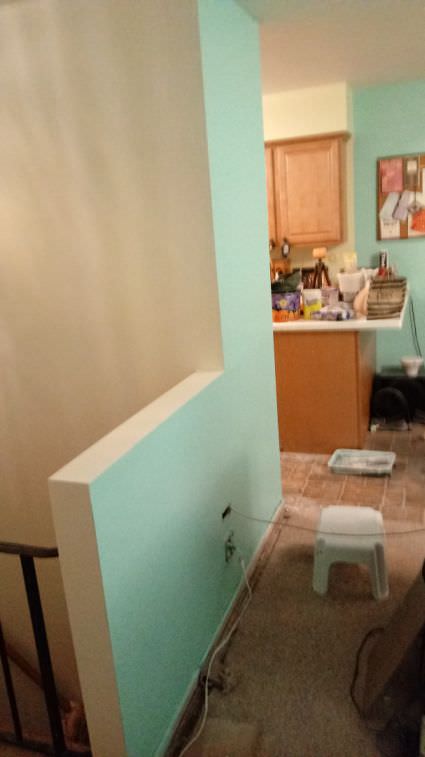 I am probably more proud of the beading on that corner than I ought to be. 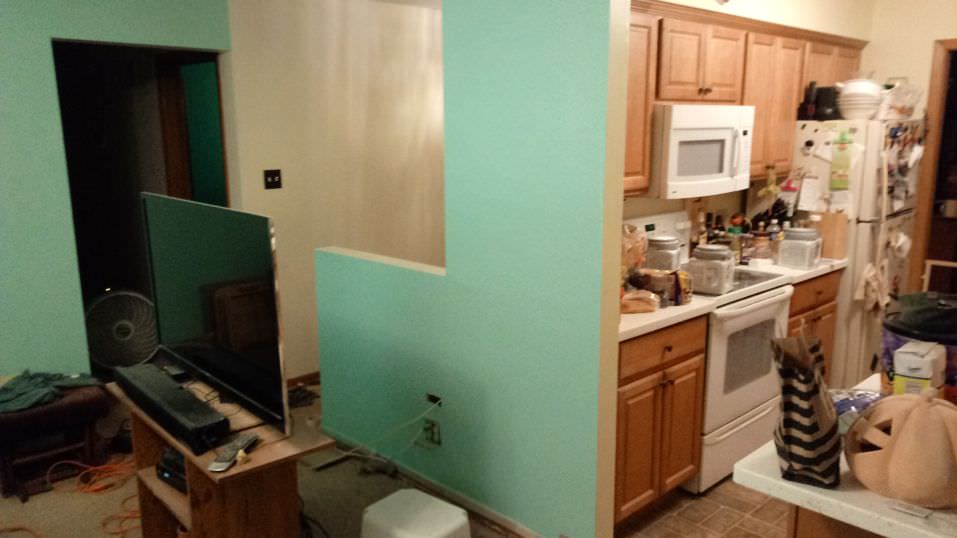 Kitchen is a mess because I've been painting. It's usually cleaner than that.

And here's something I've not seen before: the front hall without the railing: 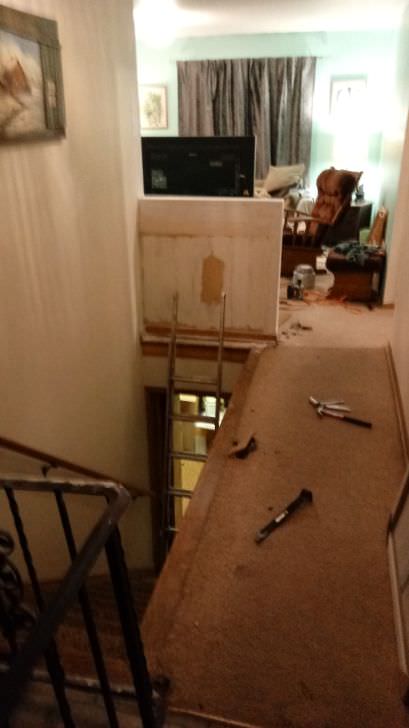 In that picture, it looks like there's a carbon shadow of the railing on that wall (from a nuclear bomb blast) because, when I was painting the front hall, I had a little paint left over in the roller tray, so I used a brush and slapped it on there around the railing.

So, the four remaining tasks:

1) Have a place on the wall where I gouged it while putting the railing back in. Once the paint's dried overnight, I'll spackle and touch it up. It is not a big gouge, but it's annoying.

2) Have a place on the opposite wall where a chunk got knocked out, at the corner; not sure how or when it happened. Spackled today; will sand and touch up with paint tomorrow.

3) Reinstall all the trim so it sits flush. I pulled it away from the wall so I could install corner bead behind it, but that's completed, so back it goes.

Anyway, the transformation is amazing to me, even though I did all the work. My efforts with mudding the wall were less successful than I'd hoped, but while it's not perfect it's acceptable...and the most visible part of it, the half-wall by the railing, looks great.

Next spring, I might just take the railing outside and spray it with a fresh coat of Rustoleum. It has a patina now, however, that I may just leave intact.