My plan was to come home, throw some polish sausage and brats on the grill, then relax in a lawn chair and maybe spend a little time pruning. Instead--

I'm not complaining, mind you.

...so after the deal was done and the car bought, we drove it to Culver's, where we had dinner. Then we took her for a little spin.

Not bad at all. Not what I'd planned, but this was more fun, anyway.

This is also likely to blow my Sunday plans completely out of the water. Already, we're spending part of Sunday cleaning the garage.

The garage was clean last August, before I started hauling shit out of the attic; in late November I hauled the shit that couldn't be summarily dumped to a storage locker. Since then, I've gotten rid of some other trash and useless dreck--but the garage is a disaster because in November I was more worried about getting the junk out than I was rearranging stuff and putting it away--and there was all the attic shit in the way anyway.

90% of our work should be just pulling stuff out of the garage, and then putting it back into the garage in some semblance of order. I guess I'll be bringing my computer desk back into the house, too (I've only been putting that off because it's tedious). There is now more space in that garage than there was before I brought the attic crap down; it's just distributed inefficiently. We can fix that with a few hours' work, I think.

Some store made a mistake on its order. Warehouse calls me and says they can see the volume of the shipment but not the weight, and this was keeping the system from letting them process the order.

Normally, my role is to take down the details, create a ticket, contact Engineering, and let them do their thing. Today, however, I had two Skype windows open--one to the guy at the warehouse and one to the Software guy--and was going back and forth between them.

But I said it was a store error. What could a store do that would cause an error in the warehouse like that?

An order for 7895 bags of birdseed, 20 lbs each. That's a bit shy of eighty tons, which is why the computer horked up a bucket of dicks over it. Let's see--assume 45 pounds per cubic feet; 160,000 pounds of seed would fill the cubic volume of a single trailer--but that would be well over the maximum GVWR of 80,000 lbs, so we'd have to split it up to avoid overloading the truck. Each truck can carry about 20 tons without being overloaded (assuming about 20 tons for tractor and trailer), so, yeah--four trucks, each carrying a bit less than 2,000 bags of seed.

But no single store is going to order nearly eight thousand bags of birdseed. I doubt there's that much birdseed across the combined inventories of all the warehouses. When the guy from the warehouse suggested putting that part of it off until later, I started to equivocate and say it might not be a bad idea--but then common sense kicked in and I told him to go ahead and do that. (Because no single store is going to order 8,000 bags of birdseed.)

My job is to facilitate solutions; I did exactly that. That is why they pay me to sit there and do almost nothing on Saturdays: so that if something does go wrong, there is someone there to coordinate the effort to fix it.

The theme of this weekend seems to be, "Forget your plans, Fungus! AHH HA HA HA HA!"

Our plan had been to work on the garage together. But Mrs. Fungus had to go to work, because the air conditioning has died, and no one there is technically adept enough to figure out which system quit. Is it the one that keeps all the machinery cool (emergency) or the one that keeps the people cool (meh)?

I'm worried about what comes next when I go out to the garage to work on cleaning it.

Anyway, I was looking at the Mustang a bit more. Found a couple more fiddlybits that need attention. Like the power wire for the carb's electric choke--it runs over, and rests on, the accelerator linkage, so whenever you step on the gas that wire gets rubbed by a metal rod. Perfect. That's got to be fixed before we take it for another drive; the insulation is intact now but it won't be if we keep going on like that.

It looks like the car has one grounding strap. Not enough. That would explain the weirdness last night when it wouldn't crank until after I took the key out and put it back in. I'll have to add one or two more.

Looking at some other things--the parking brake doesn't seem to work. That will need fixing. Right next to the release handle for that is what seems to be a knob for either a floor vent or a manual choke. I'll have to look into that. The carb in the thing has an electric choke (see above) but I don't know when manual chokes went out of style.

No air conditioning--not surprising--and the blower motor for the heater is disconnected. So I've got all that to look forward to.

In fact I expect to go through the entire electrical system anyway.

The more I look at this car, the more I see that it was not a completed restoration; it was someone taking an old car and starting a restoration, fixing it up to make it look nice, and vastly improving the mechanicals, and then having to stop. The guy we bought it from was not the guy who did the majority of the work; that guy had like five cars going at once and his wife put her foot down.

The seller last night had made a few improvements to it, but not very much, and no longer had time for it. (Younger guy, thirties maybe, with a wife and a kid.) He's put perhaps 2,000 miles on it since buying it.

Reportedly--I think I said this before--the carb was basically tossed onto the engine at sale time, without adjustment, and he's been living with that for 2k miles. Needless to say I'll be watching "how to" videos about tuning carbs! It says "Summit" on it, but it's recognizably a Holley, and there's Holley documentation in the paperwork. I don't expect this to be a big deal, especially considering that Holley carbs (like Edelbrock's) are almost infinitely customizable. You can practically go to a corner drugstore for jets for the damned things.

And when was the last time the engine was timed? I have all the tools needed to time an engine, and I never forgot how to do it--I mucked with the timing of my '75 Impala enough times, trying to get just the right advance for the engine--but carb comes before timing, and that I really don't know how to do.

Yet. It's not rocket science.

It's got a Hurst shifter in it, the kind with the little deal you pull on to get it out of park, but I want to replace that nonsense with an original (or reproduction) shifter. It's too stiff and you can't really tell what gear you're in.

Were power brakes available? Could I retrofit them (assuming it doesn't have them, which I still don't know, but am now leaning towards "not")?

Okay, now I'm just procrastinating. Well, it is awful hot out there today.

Garage is about 90% done. There's a bit more to do, but I'll do it later; I need to get out of that heat and relax. Weather web site says 102°. Figures I've got to do this on the hottest day since July. 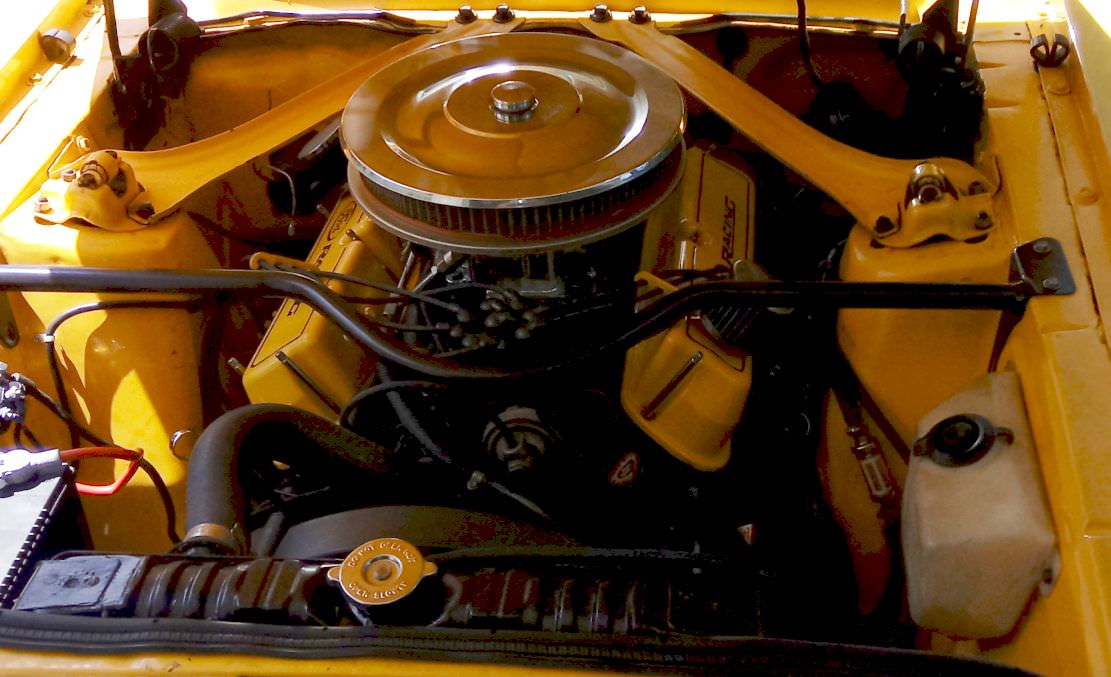 And what do I spy in the upper right corner? No vacuum booster, meaning manual brakes. Yep. I know there's a way to convert it to power brakes; I just worry about what it will cost.

A quick look at Googe shows one company sells a conversion kit for $420, but that's for cars with front disk brakes. So I'd also have to find calipers, rotors, piping, etc for disk brakes. Or there's this for cars with drum brakes, and it's "only" $350. That would help.

How to beat the heat? Easy: take frequent breaks. And when you do take a break, go inside and soak your shirt with water. The wet shirt helps keep you cool. Drink water; if you are not peeing clear you're not hydrated. Keep a fan blowing on you. Stay out of the sun as much as you can.

Mrs. Fungus is home from the emergency, and she's brought me enchiladas. I'll eat, we'll go for a spin, and then finish the garage. Woo hoo!
Collapse