Admittedly I slept until noon, but then I got going. Went to the store, then came home and cut the grass and changed the Jeep's oil. Next up: drywalling the bathroom, which means first taking out old drywall.

Probably a 3-4 hour job, and I'll start it once I've cooled off from all the outdoor stuff, and maybe get something to eat.

I could not agree with this more. Mosquitos are pests which spread disease and misery. Exterminate them. At least, exterminate the kind that spread the diseases.

Environmentalists etc don't like this plan, but of course that's because they don't care about millions of brown people dying. That's why they oppose GMOs, and anything else that would enable people in third world countries to raise their standard of living. Far better to let them live in squalor and grinding poverty, and go to bed hungry every night, and let them die of diseases that could be prevented by the judicious application of DDT. "They're only brown people," right, econazis?

And I'm linking this post about the stupid Paris Climat Accord because of a bit at the end:

I don’t see a whole lot of difference between the consensus on climate change and the consensus on witches. At the witch trials in Salem, the judges were educated at Harvard. This was supposedly 100 percent science. The one or two people who said there were no witches were immediately hung. Not much has changed.

So: at the Salem witch trials, the science was settled! and Harvard-educated people were making these statements about the evil of witches. And they executed the "witch science deniers".

Not much has changed, has it?

And, by the way, another ad-blocked article so I can't see why they say so, but the idiots at the Washington Post say that hurricane Florence is Trump's fault.

I always marvel at the power ascribed to Republican politicians, you know? Who knew that Trump had the ability to cause the worst hurricane in two decades? Why doesn't he use this power to destroy those man-made islands China put up in the south China Sea? Why doesn't he inundate Syria with forty days and forty nights of rain?

Or--gee, maybe this thing is just weather, you know?

You know, while we're about it, why don't we talk about hurricane Florence?

People are scared because it's been upgraded to Category 5, and it's going to hit the east coast dead on.

It really doesn't have to be a huge disaster, you know, when a hurricane makes landfall. It just requires that you build your buildings to withstand the weather.

Okay: we didn't just get here last month, and oh holy shit this planet has big storms! We've been here long enough to know that the east cost of the United States--all of it, from Maine to the Florida Keys--can be hit by some pretty big fricking storms. Your house or business may not be in the path of a hurricane this year, or next year, or even five years from now--but eventually it will be, and if your construction decisions don't take that into account, I think that's your fault, and the consequences are on you. Not God, not Trump, not Aunty Madoka.

Of course, lots of people don't even think about it; they build a house which would be fine just about anywhere else in the country but which turns to kindling in a hundred knot sustained wind, and they build it close enough to sea level that the storm surge turns their lot into a swamp, and then they complain they never suspected a hurricane would hit their area. Their insurance company pays out big time for them and all their neighbors, and the federal government gives them handouts.

And it doesn't have to be that way. You don't even have to build a house like a concrete bunker. There is a cost premium to building a house that can withstand that kind of weather, but it's not a huge one. Mostly it's just using a bit of foresight.

If you shoot yourself to protest Trump, there is something seriously wrong with you. Lefty professor shoots himself in the arm with a .22 in an attempt to prove...something...about Trump. I can't read the article because I won't disable my ad blocker, so I have no idea what this lunatic was trying to prove about Trump, but I can safely say that if you shoot yourself you are not proving anything about Trump, but you are most certainly proving several things about yourself.

Such as the fact that you are stark raving insane, and you need to be hospitalized and medicated.

A double about the Serena Williams horseshit.

This cartoon is not racist. Get over it. It's a caricature of a black female athlete throwing a temper tantrum on the tennis court.

And when you suck so bad people will unionize to avoid your horseshit? Dang.

Damn it, that John Bolton is awesome. 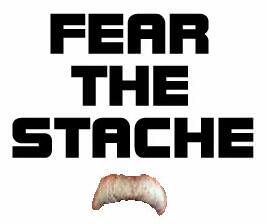 I don't like the idea of an international court, particularly not one owned and operated by the UN.

Because Chicago is just overflowing with tax revenue and they have no idea how to spend it all, they're working on implementing a universal basic income.

Just ignore that $40 billion in unfunded pension liabilities. "The taxpayer will just have to pay it," after all. Right?

Democrats have only themselves to blame. They've consistently eliminated rules to keep a Republican President from appointing judges that Democrats don't like, and to keep Republicans from standing in the way of nominees they do like--and every rule they've changed or undone has come back to bite them on their withered, poxy asses.

The Obama Center for Leftist Politics will now cost Illinois taxpayers $199 million. It was $174 million a few months ago. But hey! At least the federal government is picking up $25 million from the total (so far) of $224 million, so it's not all on the taxpayers' shoulders, right?

Oh, and by the way? For Illinois, "...the spending plan exceeds realistic revenue estimates by as much as $1.5 billion." As Second City Cop notes, Illinois is already $100 billion in the hole; since Mike Madigan refuses to allow any financial reforms, it'll get a lot worse.

Well, my food is eaten and the blog post is done. Time to get my drywall taken care of.

I have finished demolition.

The entire wall that had the wallpaper mural on it has had its drywall removed, so now we have bare studs in there. In a few minutes, once I get my wind back, I'm going to start putting up the new drywall.

Today's exercise has been taken care of, though, so I won't be doing my 20 minutes on the treadmill. Not with all the work I've done today. Ha!

I'm going to need to vacuum, too, and then take a shower. Right now it looks like a cocaine factory exploded in there, with all the white powder everywhere.

This job was approximately as messy as I'd expected it to be. I was able to use a utility knife to cut the drywall into sections, and remove those sections pretty cleanly, but there's still a lot of mess to be made when you're pulling down drywall even if you're trying not to.

Funny thing: I couldn't find my utility knife, but I found an older one in the junk drawer--old enough that it had five spare blades in the handle, oiled and wrapped in paper! I had to flip the extant blade over because it was jagged and dull, and found the packet of blades in the handle, where you'd expect there to be spare blades. Of course the Chinesium utility knives you get from Harbor Freight, just for going into the store, don't have spares in them, and the utility knife I was trying to find was actually a chimera of two cheapass knives I'd had, one of which worked and the other which did not; since they're all pretty much designed the same way I was able to take the blades from the nonworking one and use them in the working one. I last had that one when I took the carpet out of the living room; it's since disappeared. Oh well.

So I'm planning to put up a full sheet next to the new drywall that's sticking out from under the tub surround, and then I'll cut the remaining sheet to size and stick it in next to that one.

The next step, once the drywall is in, is to mud the shit. That's going to be a job in itself, but I'm not undertaking that one tonight, or even this week; that will wait until next Wednesday. I'll have to remove the trim from around the door--at least the side and top--in order to mud that corner, but otherwise there'll be the joint between ceiling and wall to do, and one butt joint right down the middle. Three seams total, two of which are corners; I think that'll be okay--and once everything is dried and sanded, we'll hit it with a good primer, and then it'll be time to paint the bathroom. Again, we'll do ultra white on the ceiling, and Mrs. Fungus is considering a neutral grey color for the walls. We'll see.

I'm going to buy some trim to stick on the edge of the soffet over the tub, and then I'm thinking I'll run a strip of LEDs behind it. One little 1/8" hole will do for the wiring, and I can plug that with silicone once it's done; and then we can have some lighting over the tub. Configurable lighting: pick a color and enjoy. Hooking the power supply and controller to the light switch is elementary, and I can put the remote control receiver in a strategic spot so it's not noticeable. Probably take another 1/8" hole for that, but if I put it next to the light fixture or something you'd never see it.

But first we need to get the drywall up, and that's not going to happen if I keep sitting here. *sigh*

So, let's go ahead and count what I did today.

4) Changed the oil in the Jeep.

5) Tore down the ruined drywall in the bathroom and put up new. (Which, by the way, with the breaks I took, did turn out to take about four hours.)

Now, you see, this is what "busting your hump" looks like.
Collapse