My question is, does she remember this with the same clarity that she remembers it being Brett Kavanaugh? 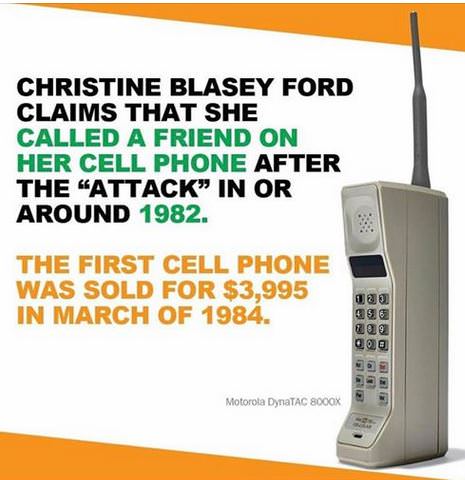 Even if the event did take place in 1984, I'm skeptical that her parents spent $4,000 to buy her a cell phone, let alone paid for monthly service that had to cost a packet. Four grand was the price of a really good used car in 1984. (And a new Yugo, in 1985, was about that, and a new Hyundai XL, in 1986, was $5,000.) A cellular telephone was something that a doctor might have, depending on his specialty, and which high-powered executives almost certainly would use. Mobile phones were regarded as luxuries.

By the way, that cellular telephone there? That's the smallest they could make it in 1984.

Again, it is entirely possible that someone got on top of her and grabbed her and did all that other stuff (including, by the way, stopping when asked to) but it simply was not Brett Kavanaugh. I'm a bit skeptical that it happened at all, given that she didn't tell anyone at the time, continued going to parties, forgot completely about it for thirty years, and only remembered it when she realized that such a story could help prevent Brett Kavanaugh from sitting on the Supreme Court.

I think it's entirely possible that--until Mitt Romney's candidacy in 2012 raised the possibility that Kavanaugh would be appointed--if she remembered the event at all, it was in the context of, "Man, remember how nuts our parties were in high school? Ha ha ha! There was that time that guy got all handsy with me and I was all 'uh, hell no'! Remember? Man we got wasted that night."

Since when, exactly, is the ACLU "non partisan"? I've been calling the ACLU the "American Communist Liberals' Union" since I was fourteen, for fuck's sake. That was based entirely on their refusal to support the Second Amendment, which is one of those civil liberties, and it was obvious even then that they were anti-Christian. (In fact, that was my other, less-used monicker for them: "Anti-Christian Liberals' Union".)

The ACLU opposing Brett Kavanaugh does not surprise me. What surprises me is that they took so long to oppose a Republican nominee.

One of the things I do, if I have the ingredients, is to make "gol-danged quesadillas" the day after we have tacos for dinner.

Shredded cheese, tortillas, and the leftover taco meat--easy-peasy, tasty, and not too carb-heavy.

If, indeed, it should please the Crown... Property taxes are insidious and ought to be banned.

This is one of those "don't get me started" things.

The way we generate computer code these days is God-awful. In 1986 when I contemplated buying a 16-bit computer (eventually settling on the Atari ST) I was aghast that their operating systems were being coded in C. But that was about the time that the rot began to set in.

In the 8-bit era, if you wanted fast code you had to work in assembly; there just wasn't any other way. Typical clock speed for your 8-bit processor was 1 MHz and while you had a crapton more computing power than even a decade earlier, you didn't have anything to throw away, and even a well-written BASIC program was slow if you asked too much of it. (More on that in a moment.) And 8 bits of address space meant exactly 65,536 bytes of memory, and some of that was expended on ROM, and you needed memory for the screen, so under 48k of available RAM was typical.

16 bits gave you 65,536 squared bytes of memory, although only half a meg or a full meg was practical in an era when 32k chips cost two dollars apiece. But clock speeds were around 8 MHz and you had memory to burn compared with the 8-bit machines.

Suddenly it was no longer difficult to write software that ran quickly--because you could use a C compiler to generate a machine code executable. The program wasn't optimized; it essentially took chunks of machine language and pasted them together and made all the bits line up. It was faster than interpreted BASIC but the code it generated was bloaty because of all the stuff that linked in during compiling.

It worked, but a human could still generate machine code that worked faster and better and took up less room.

...and I'm going to stop there because I've got less than two hours before the sun goes down and that grass has got to be cut. Argh.
Collapse