The denouement to the whole "wiper motor" thing is that I have it in her car and working, but it needs a tweak; the wipers wipe down about 1/2" from the park position before going up. Not a big deal, and it'll do for now.

Motor burned out. Once it was in the Jeep on the way to the store, and bathed in warm air, you could smell the "roasted electronics" smell coming from it. *sigh*

Over the past few days I've been doing some epic doodling while waiting for calls. Follows the latest of a series: 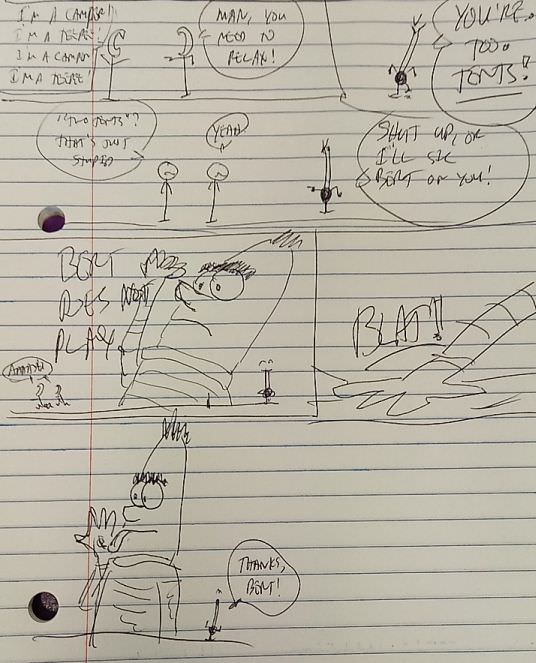 Translation of my chicken scratch:

Panel 4:
BERT DOES NOT PLAY.
AAAAAAAAAA!

I especially like the martian's smug expression in panel 4.

How, exactly, Bert ended up in my notebooks--I don't really know. I was fiddling around and drew eyes with a thick unibrow, and the next thing I knew, there was Bert. The martians were terrified of him, though; so on a later page he attacked them. They had the ultimate nullifier all handy in a case labeled "In case of BERT" but the martian that broke the glass was too enthusiastic and broke the nullifier, too.

No problem! One martian had a .357 magnum--but all that did was blow Bert's hair off and madden him, so he started eating martians, and the remainder were crying out, "Ernie, save us!" But Ernie was atop a nearby building and whispered, "No." Then it was revealed that Ernie was Rorshach--

I stopped there. But not before doing a page of character sketches of various muppets in their new Watchmen roles. I couldn't really remember what the costumes looked like but I figured Cookie Monster was a good Comedian, and Kermit was Silk Spectre, and Grover was Nite Owl. (Me no habla Miss Piggy--never liked her--and anyway Kermit cross-dressing was funnier.)

At some point I'll put the "Bert Attacks!" page up here for your amusement. If I don't get sued by Sesame Street first.

Ahh ha ha ha that's what you get, Dick's Sporting Goods! SJWs may approve of your anti-gun stance, but SJWs don't buy sporting goods. Have you looked at those people?

Planned Parenthood is working as planned by Margaret Sanger et alii. Margaret Sanger wanted blacks to abort their children, as many as possible. Blacks are only about 14% of the populace, but they have 36% of the abortions. Ms. Sanger would call that a "win".

Someone was paid to take natural gas. The US produces a lot of natural gas. It's a natural byproduct of extracting oil, and there's so much of it that it's not worth capturing and selling.

Every time I look at my gas bill, I am stupefied at how little of the bill is the natural gas itself. 90% of the bill is surcharges and taxes. Delivery fees, infrastructure fees, maintenance fees, tax this, tax that, tax the other thing. We are virtually at the point of "too cheap to meter" natural gas!

Meanwhile, this morning I filled up for $2.31 a gallon. I haven't seen gas prices that low for a long while, not in the Fungal Vale. Please do not get the idea that I'm unhappy about this; with the stinkinous commute, the Jeep's getting about 18 MPG even if I never go over 60 just because I'm sitting and idling so much, crawling along at 10 MPH for an hour at a time.

Commute to $Major_Hardware was about 46 miles. Commute to new job is maybe 15 miles past that, and that 15 miles takes as much time as the 40 that precede them!

Glad that once the training is over I'll be telecommuting. This shit's for the birds.

Bringing a hockey puck to a gun fight.

Only academics could be that fucking brilliant.

"I thought it would be easy." Well, maybe if Barack Obama or Hillary Clinton were President, but not with Trump in charge. Sorry, buddy; just go back to where you came from.

Oh--of course, the leftist organizations that funded the trip there aren't hanging around or helping the people they dragged halfway across a continent. The point's been made. Anyway, omelettes, eggs, right?

This post links to an article which is so chock-full of fuggheaded nonsense I could not read much of it. When someone starts talking about not calling it "colonizing" because that might legitimize the colonial period, when all sorts of indigenous people were hatstand fishtank baby monitor.

Eh? Oh, when that kind of talk starts pooting around, I realize that whatever that person is saying is a complete waste of time.

Do have a look at the article, though, because one seldom gets to see such a perfect example of a mid-wit who has been educated beyond his/her/its capacity.

Pixy has a "Kero-chan Check!" image that can't be beat.

Handmaid's Tale takedown. Margaret Atwood is now writing a sequel. She originally said that the book stood alone, that the story was complete, but with the resurgent popularity of her craptastic extrusion of course she changed her mind. Who wouldn't? Bang out a couple hundred pages of shit and the NPCs will eat it up, and you'll go on all the talk shows and make a screaming fuckton of money in the process. "Artistic integrity"? The ultimate validation is crisp and rustles.

So, today--other than drawing--I gave thought to the old console stereo in the basement.

It was new in 1973 or 1974, and for quite a while I wasn't allowed to touch it. Eventually I was, and it was quite a nice stereo, though Mom's usual line was "TURN DOWN THE BASS!"

My brother had the idea of running wires from the living room to his bedroom, and hooking up speakers in there. Then he could listen to music in his room. That lasted until the stereo went "poit" and let out its magic smoke. The thing sat inert, then one day a repairman came by. He pulled the amp out and left with it; some time later he came back and installed it again. Then music returned.

...one day I was fiddling around with half a pair of headphones, and turned the balance control to see what it would do to the sound, and "poit" out came the magic smoke. I reset the circuit breaker in the back and turned it on, and it went BMMMMMMMMMMMMclick.

Reset the breaker, turn it on, BMMMMMMMMMMclick. Every time.

Years ago I figured it had to be something in the power supply. Today I revisited those thoughts, and drew circuit diagrams and worked out the behavior of the thing.

You see, audio equipment likes DC. If powered by AC, an amplifier will also amplify the AC. Noisy--and something I did not know until I cobbled together a stereo amp from a surplus amp board and some junk I had on hand. The amp was supposed to be able to take AC, but when I powered it with AC, it sounded suspiciously like the old console stereo did, only without the click at the end. That was when I realized it might be a power supply problem.

For the little stereo, I built a nice 12v regulated power supply, and forgot about the console stereo.

Let's say, for the sake of argument, that one of the diodes in the rectifier has shorted. It doesn't even matter which one; any of them, shorted out, will allow current to flow from one lead of the transformer to the other with perilously little resistance. "Tiny resistance" in any circuit means "really high current"--that's Ohm's Law.

Now, because audio amps like clean DC, there are smoothing capacitors in the power supply. So when you turn it on, for a little bit, those capacitors sink the current and provide enough impedance that the current is kept low. But as soon as those capacitors are charged, the current's got nowhere else to go but through that shorted diode, and at that point the circuit breaker trips.

Because the voltage being fed to the amp is all bumpy-like, and not smooth, you get that nice loud 60 Hz buzz for perhaps a second or two before the circuit breaker trips.

(It is also probably a slow-trip breaker, to boot.)

I went through all this and concluded that if I can ever get a gander at the thing, the power supply is the first thing to look at. It is possible that something else went "foom" and is causing the power amplifier to oscillate, but I regard that as less likely than a power supply issue.

If I'm right, it's a few diodes--and a crapton of capacitors that will have to be replaced, because this thing is forty-odd years old. And the speakers will need to be rebuilt or replaced. But then, the old stereo will work perfectly again.

If I ever have time for it.