This thing with Trump canceling the Democrat junket to Afghanistan, it is such a hardass tactic I didn't ever think I'd see a Republican do something like that.

The left tries to spin it, of course, as a "temper tantrum" because "his ego is hurt" and he's "punishing" the servicemen stationed there by canceling Pelosi's trip.

I am utterly certain soldiers in Afghanistan were looking forward to Pelosi's visit the exact same way a 5-y-o looks foward to Christmas.‬

That says it best. Larry Correia's post also sums it up, without sarcasm: "Unless Nancy Pelosi was bringing a whole bunch of strippers and beer with her I can't imagine the troops being too heartbroken."

Average US soldier: "Damn it! I was really looking forward to meeting someone that looks like a withered old bag lady and who buys Botox by the gallon. That would have been the highlight of my life."

Where, indeed, is the downside of this shutdown? Bonus points for the meme from that gangster movie. Love it.

CNN is trying to push Pelosi's "security" concerns about SOTU as a "crafty" political ploy when in fact it's a lie and everyone knows it. ...and it ain't that "crafty" considering that Trump just slammed it back in her face.

And he sure as hell DID slam it back in her face. Look at this quote:

Why would Nancy Pelosi leave the Country with other Democrats on a seven day excursion when 800,000 great people are not getting paid.

There's that Democrat-media horseshit about the "poor poor federal employees who are suffering", flipped and thrown right into her face.

Meanwhile a bunch of folks are insisting that the Democrats have the public on their side. You just keep telling yourselves that, guys, the same way you were confident that Hillary had the 2016 election sewn up.

You think I'm wrong? Democrats lie about being for open borders because they know how it plays with the public. But open borders is what they want, what they are trying to keep by opposing Trump's wall. They know that if they come out and say they want open borders, they will lose elections. So they say, "We want border security but...." and as is the case with any sentence they utter that has that "but" in it, you can ignore everything that comes before it.

And why advocate for the de facto situation, when all they have to do is nothing to maintain it?

Borepatch talks about Gilette stepping on its collective dick. "...[Y]ou can't explain to someone who's been offended that they haven't, you know, been offended."

Linked because of the dumb fact of the day and also the classic picture of Lum.

If this is even a little bit true, then a lot of FBI people need to go to jail. I tend to discount this kind of information until and unless it is widely reported, but the very notion of FBI officials conspiring to harm the President--and other FBI officials deleting the evidence of that conspiracy--is chilling.

I feel as if "conspiracy" is too heavy a word to use there but I'm at a loss for one that better characterizes the situation.

I need this. Today I got five spam calls before I was even due to get out of bed. I receive at least 3-5 calls from impossible phone numbers per week, too.

You know what those are: they're from someone who's spoofing the caller ID system, using software which randomly generates the fake phone number--and it doesn't check the fake for validity. But when I see that number with a prefix that is 00x (where x can be any number) I know that one's a straight "reject call".

What I need is an app that will reject all those calls. Failing that, I need to configure my contacts so they have special ringtones, and set the general ringtone to "silent" so that only known numbers will ring. Thems that I know get through; thems that I don't know but who leave a message (and who aren't a complete waste of time) will get callbacks.

The chip in that image is a microcontroller. It is not a very powerful microcontroller, but it is still capable of being programmed and doing useful things. It has 1024 bytes of storage and 32 bytes of RAM, so to use one of these, you must be very good at programming in limited space. The important feature is very small and power-efficient.

Addendum: For example, you could use one to run something like a Big Trak. End addendum.

So, the snow was upgraded to "winter storm warning" but so far I haven't seen a single flake. On the plus side, the annoying meeting I didn't want to go to anyway has been postponed until next week. And even that annoyed me.

Here's the thing: making the best of it, I figured I could stop at Fry's on my way home and get a new USB keyboard with editing keys that make sense. Right now I'm using an ASUS keyboard which has the most craptastic arrangement of editing keys you ever saw. Instead of the standard 2 high by 3 wide set of keys (insert|home|Pageup/delete|end|pagedown) they have this really stupid arrangement: 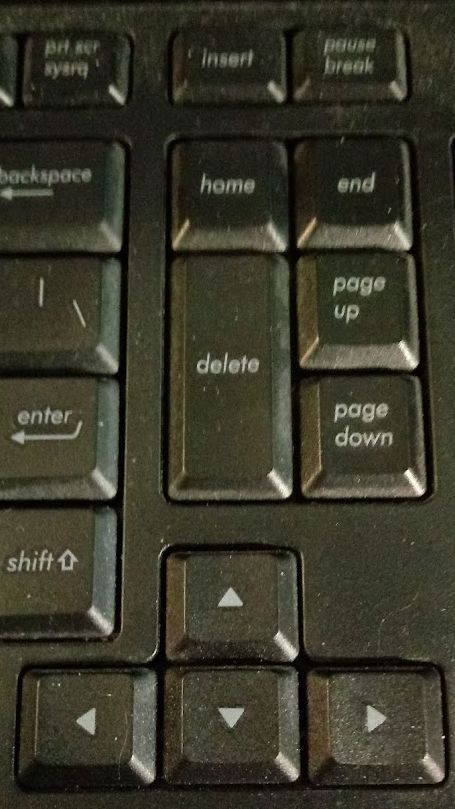 It's designed that way to save space, but what happens is that when I try to hit "home" I hit "end", and when I want "insert" I get "home", and so forth. It's a stupid arrangement and it's neither efficient nor helpful.

I have at least half a dozen keyboards with the traditional arrangement of editing keys, but guess what? THEY AREN'T USB! They're all PS2, and the work computer doesn't have a PS2 port on it since virtually no one uses it any more.

Further, as you can see from the picture, it's dead black and impossible to see the medium grey letters on the keycaps--so when I need to use the editing keys I have to stop what I'm doing and peer myopically at the keys to see which one is the right one.

So what I thought--getting back to the stop at Fry's--I thought, since I have to make that stupid drive anyway, why not stop and get a new keyboard, one that's not too dark to see, is USB, and wasn't designed by a lunatic?

Even worse is the fact that so far it hasn't started snowing, and it's just about 7 PM now, which is when the warning goes into effect.

Oh well. Guess it's not really a problem, is it?
Collapse