Well, wait a moment; I did make a side trip to Fry's. But that was an hour, all told, and I would not have gone there if I hadn't been up that way. Why couldn't work-from-home folks just teleconference in?

Fry's was a disappointment, too. The place where they keep the computer peripherals looked as if someone had tested a neutron bomb there; the shelves were largely empty. Thank God I found a usable keyboard in my pile; I would have been pissed if I'd gone there to get a keyboard. They had a ton of Logitech keyboards of various kinds, but if I wanted a Logitech keyboard I could go to Walmart. Of course they had a ton of gamer keyboards, but those start around $100 and rise rapidly from there. And they are all various shades of black. Dark grey, gunmetal grey, charcoal grey, black.

I remember when black input peripherals were the latest and greatest, when $10 would get you a cheap keyboard at a computer show but the only color you'd find was beige. Now $10 can get you a cheap wireless keyboard but it'll be black, and you simply cannot find light-colored keyboards anywhere unless you want a Mac keyboard. (And who was it who advertised their computers as not being mere beige boxes?)

Nothing worth buying in the anime section, either, and I couldn't remember the model number of my printer, so I didn't get any toner. I can get all of that on-line cheaper, anyway.

But I picked up a USB extension cable and a power regulator module. The power module is 1.5v with a 12v input; I suspect it's "about" 12v and will work fine on less, or a bit more, if need be. It was $10, and I don't think I could build one out of parts on hand for that much if you consider the time it would take me to build the circuit and debug it and get it working right.

Anyway that'll let me power the MP3 player from the Jeep's power port. Now that I don't commute any longer. Whee!

I pondered a memory expansion for Floritica, but their RAM prices were pretendous. Says here I can get an 8 GB module for the thing, guaranteed 100% to work, from Crucial.com for $55. I'll probably do that.

THIS. This, a thousand times this:

All that blood-boiling idiocy is bad enough for sure. But of late the thing that’s really frosting my nuts is a no-fooling puzzler, something I truly can't figure out after lengthy deliberation: high beam headlights. After years and years of only occasionally, even rarely, being blinded by some doot-brained nimrod coming at me down the other side of the road (bad enough) or coming up behind me (worse) with his damned brights on, of late this annoying, dangerous, and stupid shit is something I'm seeing many, many times a night, every single night, seven days a week. WHAT THE ACTUAL FUCK IS GOING ON HERE? Yeah, of course now and then our attention slips and we leave the brights on on a dark country road, we've all done it--whereupon the guy you’re approaching on the other side flips his brights at you, you sheepishly go "Oh, dammit!" to yourself at your absent-minded lapse, and cut your dang brights off until he goes by. In fact, I can remember a time when, if it was a cop coming at you flipping his brights at you to get you to cut yours, and you failed to do so, you could pretty much count on getting stopped, maybe even a ticket depending on how peaceably the guy's lunch is sitting with him that evening.

But no more, apparently. There is a whole damned passel of mouthbreathers out there these days who either A) have no idea how to turn their brights off and just drive around with them on all the time hoping no one will notice; B) encounter old guys like me, who don't see so good at night no more anyway and are about to careen into the ditch, flipping their brights at em desperately trying to get the thoughtless sonsabitches to kill the damned blinders already until we can all pass safely by, don't give a fragrant shit, and just say, "Ehh, fuck 'em" and leave them on; or C) don't know what high beams are, have no idea they're switched on, and are perplexed as to why oncoming drivers' lights are going brighter and dimmer again and again, because nobody HAS functioning high beams in Pakistan or Somalia or whatever other blighted hellhole they arrived here from three weeks ago; or D) some abhorrent combination of any or all of the above.

I am blockquoting this part, but not because it's the best part; I agree with his entire post but I can't blockquote the whole thing. Just read it.

The FBI has "...become the Gestapo we were all warned about as kids."

This is why I want to buy--not license, and definitely not subscribe to--software.

Short form: Microsoft's inaptly named "365" went down for two days. While this is not really a big deal if you're just using it for personal email and writing letters to Aunt Tillie, it's a pretty big frigging problem if your company uses Exchange and none of your 3,000 employees can send or receive emails.

"Do you know who my dad is?" A total jerkoff, it sounds like.

I'm incredulous that I walked all over Fry's today and could not find anything on which to spend money. Dang.

So, primarily from boredom I went into the basement and did a little poking around.

First up, move the two comic boxes which had been sitting on the old console stereo. First one I grabbed had Sailor Moon and Tenchi Muyo books, individual issues. Not sure how long I was collecting the damned things but it was long enough to fill a short box with those two series.

Other one was individual issues of Ranma 1/2, and then the prize find: Knights of the Dinner Table, issues 6 through 65. That's approximately half of my KoDT collection; in fact it might be all of it, because so far I have been unable to find the box containing the other half. I fear it might have inadvertently got tossed out, which would suck most egregiously. Here's hoping it wasn't.

Anyway, that done I started poking around for other things, and finally decided to see what was in the various boxes on one of the shelving units. There I found two C64s, two 1541 disk drives, and a total of four C64 power supplies.

...so I decided I'd have a look at the things and scope them with a multimeter and see if any of them were any good.

Apparently not. Three of the four reported no AC between pins 6 and 7. The one that did have AC there was running at 12v or a bit more. The 5v rails on all four supplies worked fine.

Since 90% of the computer runs on 5v that's okay, but without the AC input, the sound chip won't work, and from what I've read about the C64 power supplies it looks as if the clock signal is generated from the AC frequency, somehow or other.

One of the supplies which supposedly had a dead 9V rail nonetheless threw sparks when I accidentally shorted them together. It did so more than once, because I am fumble-fingered. The schematic for the power supply shows a 3A fuse in the 9V rail; a couple of sparks from a slipping probe shouldn't pop that.

Now, the funny thing is, I could easily build a power supply for a C64; it's honestly a trivial exercise to make one:

The hard part is getting the right transformer--and even then, in the absolute worst case I could just use one to convert 120V AC to 9V AC and use that to drive both the AC circuitry in the computer and to run a DC power supply that would regulate it down to 5V. The real problem there is that the schematic I found calls for 1A at 9V AC, but 7.5A at 5V. Yeesh.

That's rather far outside a 7805's specification.

But! Read the fine print and you find that only 1.5A at 5V is required, and the schematic should read 7.5VA, not 7.5A. That's easier. I think it's still outside what a 7805 can handle, though I wouldn't put money on that. And there are ways to handle that issue, even so.

...whoever did that schematic is on drugs considering that the regulating component is not a simple transistor--cannot be, it's physically impossible--but an actual voltage regulator.

And any fool with basic electronics knowledge can build a power supply using a linear regulator. It's dead simple, and the hard part is making sure you don't short anything and that you have a good heat sink for your regulator.

But, what the hey--I can do that later. Right now--

I took out the 1.5v regulator board that I got from Fry's earlier today, to check it out, and ended up hooking it up with 12V DC input from a power brick, a connector I found in my project box, and just jamming the wires into the power clips on the MP3 player.

It works. It works.

I'm getting 1.49V out of the regulator with the 12V input, and the MP3 player is working as if it had a battery installed.

So the next step is to jigger up some kind of adaptor--something that will be about the size and shape of an AAA battery, but which will have the wires from the power plug soldered to the ends. After that, I need to work out some kind of enclosure--but that can be anything that comes to hand, like a pill bottle or an old plastic paperclip box or something. After that, mount it all in the Jeep. Whee!

...as I said, just in time for me to no longer have a commute. 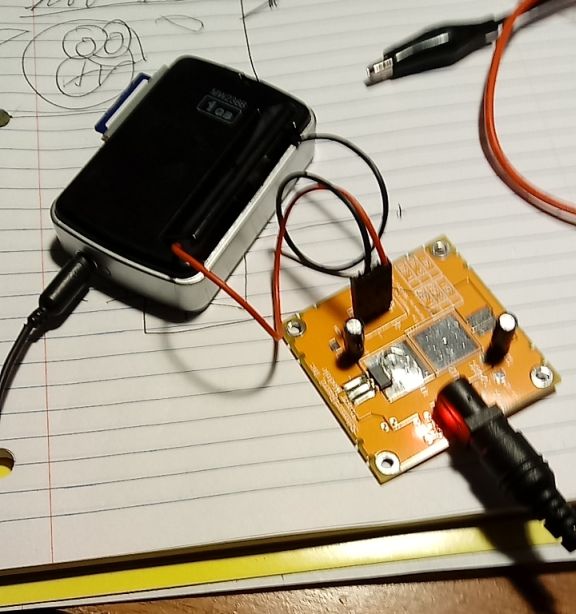 The power supply board and the MP3 player in question.
Collapse