The pair of Skull Candy Ink'd earbuds that I got in late February of 2009.

This pair replaced the pair I lost in my precipitous flight from Maine the last time I was up there. I opened this pair once I was home and had realized my error.

That was about a month shy of ten years ago. ...and I paid twenty dollars for the pair. Amortized over the course of ten years that's like fifty cents a year. Fer friggin' my snack.

One decade later, the cord near the strain relief on the plug has broken, and it looks as though one of the wires went with it. I still get sound out of both buds, but it's got a weird quality to it. Sounds like a surround channel instead of regular stereo music.

I thought they were working, but then a song came on that sounded odd, and so I went to my go-to test song for these kinds of things: Alan Parson's Project "One Good Reason". Parsons did a lot of things with the audio in his songs, and one of them was that there's a lot of surround-encoded stuff going on. If you listen to this song on a surround system, the harmony (and some other parts) comes out of the back speakers.

And this pair of headphones faithfully plays the surround sound. Meaning they're missing a connection. If both speakers have their own positive connections but their negatives are connected together, that's usually how you get that kind of sound.

And the heck of it is, they're not really broken, at least not in a way I can't fix. Get a 1/8" stereo plug and do a little soldering, and we're back in business.

And I just might do that. But if I can't? Ten years--at fifty cents a year--and I have about three other pairs I can use.

After a hiatus of 87 days, I started work on the story again.

True fact: October 30 was the last time I added anything to the story. Savvy Fungus readers may recall that was the penultimate day of my employment at $Major_Hardware, and it was slow enough that day that I added some to the story. Oct 31 was a Wednesday, and my day off; Nov 1 was, of course, my last day there, and I didn't want to be working on my story when I got the tap on the shoulder, so I didn't do anything with it that day.

And of course since then I just haven't had a minute....

One of my new year's resolutions is to finish it. Here goes.

The latest and greatest is the reader's first explanation as to what the f--- is going on, and as a bonus it brings back an old favorite character that my past friends would recognize: Chet Bach.

Chet's not the same man he was, though he's still got (most of) the strength and he's still an undercover agent--and he still drinks highballs.

Chet's actually the star of my first-ever published story. A short called "Test Run" ran in my high school's "literary" magazine, Shades of Light, in 1983.

...and in fact he is slotting into the new-and-improved universe in the kind of place for which he was originally created. As I originally envisioned the character, he was meant to be kind of an outlaw or something in a very rough universe; Apocalyptic Visions after the "apocalyptic" part fits that fairly decently.

This didn't just come to me, either; I had the idea while driving to my new job. I knew this was going to be what happened next, and have known since at least mid-November. I just needed to get around to it.

Having fun with it...which is probably why I started writing about midnight and banged keys for nearly two hours. Heh.

That's the expected HIGH temperature! Look at this shit! LOOK AT IT: 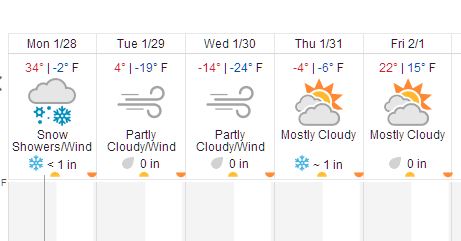 Holy crap, stay home. -14° F is bad enough. -24--that worries me. I'm not particularly bothered by snow but arctic cold like that is bad news.

It snowed Saturday, and it snowed again Sunday, starting about 11:30 PM; it proceeded to snow all night and into the morning. As planned, I got up when my wife did and spent about twenty minutes with the little snowblower, clearing the driveway and cleaning off her car.

The snow was almost too much for the little snowblower to handle. The temperature is a bit above freezing so it's packing, and it was a very fine-grained snow, so it was pretty dense. And with Sunday's snow there was about six inches or so of the stuff. The plow drift at the bottom of the driveway was particularly difficult.

Still easier than shoveling, though.

Hippo attack! Run for your lives.

Overheard in the bunker: "Twigs, don't lick my mouse!"

Cat gets lonely. Cat gets in my lap. Cat then sits on my desk. Cat tries to explore work computer and is told "No." Cat then tries to get at it from another angle, sniffs mouse, starts to lick mouse.