People are acting as if the cold snap we just went through was a major disaster, and I'm kind of fed up with it.

Was it dangerously cold? Yes. Was staying home from work a sensible choice? Of course, given that people from the midwest are usually not equipped to deal with arctic temperatures.

People who live in arctic conditions know what to do, and have the gear to be safe in those conditions. People who live in the midwest usually don't, so I understand the decision to stay home and avoid traveling when we have an extreme weather event like that. And the people who live in northern Canada or Alaska can laugh at me all they like over it, the same way I chuckle when I read about people in Florida being advised to "dress in layers" for temperatures in the fifties.

But at the same time, 90% of the midwest population has central heating. It's not as if--just to stay alive--you had to stay up all night to feed a wood-burning stove, close off most of the house, and huddle your family in the kitchen with your goats and chickens so no one would freeze to death. And if you needed (or simply wanted) to go out--to go to work, for example--the conditions were such that you could do it in safety as long as you took certain precautions.

It's been this cold around here before. 1985 was the last time the temperature got down in that range, and (I think) 1966 before that. It happens. But if you think about it, any time the thermometer goes below about 60, that's "dangerously cold" because you can get hypothermia and die. It's merely a question of what you're used to dealing with--and as I said, people who live in arctic climates are probably laughing their asses off at us.

So I have this GIF I shamelessly stole from American Digest which sums up my attitude towards these "survivors":

Learn to code, guys. Vice Media is laying off 10% of its staff. Fortunately, I am told that everyone has the ability to learn IT skills, particularly the esoterica of programming, so they should only be out of work long enough to take a few courses in C+.

Hey--if coal miners can do it, can't media types? Even with degrees in romantic comedy?

Linking for courtesy dept: this Chateau Heartiste post doesn't really contain anything in its main body, but it had this as an addendum: 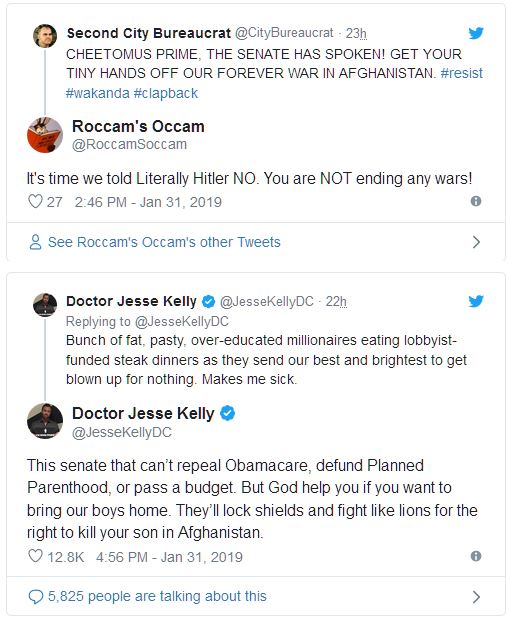 Afghanistan has demonstrated time and again that it likes living in the seventh century just fine, thank you, and has no interest in modernizing. The USSR learned that lesson before we did.

Honestly, we've been there for 17 years, and there's no sign that things will get better unless we want to carpet-bomb the place with thermonuclear warheads. Turning it into a mildly radioactive parking lot is the only way to keep it from being a breeding ground for islamic terrorists.

Senate doesn't care. It's not their sons who are getting blown up over there.

Why is Mao included in my list of evil men? I often refer to it: Lenin, Stalin, Hitler, Mao, Castro, Pol Pot--like that, in approximate chronological order. Why is Mao on the list?

Death is the result of all forms of socialism, from the death panels in countries with socialized medicine to the Nazi concentration camps to the Soviet gulags, and on, and on. A mountain--an entire mountain range--of skulls cannot bring about the world the left says it wants.

Which is fine with them, because what the left says it wants is not what it actually wants. The left wants that continental divide of skulls--or, rather, what it represents, which is complete, total, unending, perfect power. The power to decide who lives or dies, to decide what every person will do, every minute of every day of their lives. To decide how they live, when they live, where they live.

The left wants nothing but ultimate, total power. Nothing else will do; and there is no lie too big or small, no crime it won't commmit to gain that power.

Mike Madigan, commissar of Illinoistan, deposed by the feds. And he proceeds to answer most questions with variations on the theme, "I don't remember."

Glad to hear it. You fools should be afraid of Mike Pence. Trump is an outlier, a result of the Republican party leadership refusing to listen to its constituency. Mike Pence, on the other hand, is anathema to that self-same GOP leadership because he's what they despise only slightly less than they despise Trump: he is a real conservative.

If Trump is impeached and removed from office, you guys get Pence. If I were you, I would worry about that. A lot.

This is not a problem. It's not a problem because the guy in blackface is a Democrat. Robert Byrd was an "Exalted Cyclops" in the actual KKK and that never caused any trouble for him.

So this old picture of some Democrat asshat in blackface in college, posing with his friend who's dressed up like a klansman--forget about this having any negative effect whatsoever on his political career. He gets a pass because of the little (D) following his name. The press won't care.

I write what I want to write. I don't care what the SJW/NPC crowd thinks of what I write. As Larry Correia points out there, they will try their best to crush you regardless of what you write if they identify you as their enemy, so there is absolutely no point in trying to satisfy them. You can't.

They will turn on anyone in their desperate need to destroy. It will not be logical or consistent in any way. Whatever the mob decides is the target of the day, that's what they will attack.

So, here is a problem with dark matter. There are all kinds of experiments all over the world trying to detect proof of the stuff, and so far the best claim to have detected it is a 20-year-old event which--it turns out--is dubious at best.

Further, the calculus has changed: dark matter is now 27% of the universe. Normal matter is 4%. "Dark energy" is the other 69%.

Used to be that normal matter was 10%. What happened?

Astophysics is a mess, anyway. The age of the universe has been pegged somewhere around 14 billion years; but for some reason it's necessary that it be an order of magnitude larger, something like 150 billion light years across (or more, the exact figure escapes me). But because spacetime cannot expand faster than lightspeed (I don't see why not) some kind of "inflation" must have taken place early on, which is why we need dark energy in the first place. But then the present-day universe isn't expanding fast enough, and there isn't enough mass to explain why that is. And besides, galaxies aren't behaving according to classical mechanics.

I've not had a satisfactory explanation for why this convoluted and complex model is somehow better than simply accepting that the universe is an open structure, which would obviate all the stuff they're adding to "closed space" in order to make it work.

I am convinced that sooner or later we must conclude that dark matter and energy are nothing more than epicycles being added to a bad model.

When Theodore Maiman invented the laser in 1960, I don't think he quite knew what he was getting us all into. The laser has proven to be a technological shmoo, something so bleeding useful that we're not quite certain how we got along without it.

What is a 15-year-old doing with smoking paraphernalia? "Rolling papers" are used for making cigarettes or joints, neither of which a 15-year-old should be messing with.

...but I'll tell you, that $1 million won't last very long if she blows it on that kind of nonsense. Even today, a million bucks--suitably invested--can take you a long way, but not if you insist on spending it on rich living.

Oh well. Not my problem.

My wife got a resume today which listed "up beat and bubbly" as a job skill.

...no, I don't have any words for that.
Collapse