Let's talk about "Justice4Jussie". "Jussie" would be the third-rate actor from the second-rate TV show who faked a hate crime against himself because--it turns out--he didn't feel as if he was being paid enough to be in the show.

Well, he doesn't have to worry about that, as they're writing him out of the show.

He was getting $125,000 per episode. Okay, that's not $125,000 per year or even per month but per episode. That is twice the ANNUAL median income in the United States. How many episodes in a season? How long does it take to film a single episode of a TV show? Go ahead and include rehearsals and so forth in that. What does this turkey's hourly pay work out to if you figured it against a year's worth of regular work hours, which is 2080 (52 weeks x 40 hours per week)? His pay for one episode, figured that way, is sixty dollars an hour, putting him firmly in the 1%. (Or maybe 2%.)

Well, of course, now it figures out to $0. But before they wrote him out?

This is why I don't have any sympathy for these fucking asshats. "Ohh, boo hoo hoo, I'm oppressed because I'm a black man and gay! Boo hoo hoo! I want to be paid more for my work! Boo hoo hoo! I'm only making $125,000 for about a week's worth of work and that's not fair! I'll fake a hate crime!" 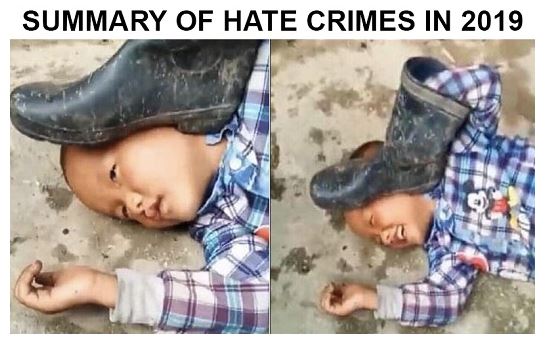 The only change I would make is "white-on-minority hate crime" rather than simply "hate crime", because there have been some actual anti-white hate crimes this year which were not hoaxes. But the other way around? 100% fake.

If you do in fact want to stop illegal immigration, this is actually all you really have to do. ENFORCE THE LAWS THAT ARE ON THE BOOKS.

There is an interesting point to be made here.

There are two reasons we need a border fence now; just two.

The first is that we do not enforce the law against hiring illegal immigrants. Which is to say, if a company is found to be employing illegals, they have to fire them, but they pay no fines and there are no other penalties at all for what is both a de facto and de jure CRIME.

The second is that we do not enforce limits on welfare. Once an illegal alien gets here, there are all kinds of free money that the federal government gives to him, with scarcely any check on his citizenship status. If a woman gets here and has her baby, well the baby is declared an American citizen and since he can't take care of himself his mother must of course be subsidized etc. (There is a reason they call them "anchor babies".)

The Iowa Chamber Alliance, the state chapter of the U.S. Chamber of Commerce, is opposing the legislation claiming the E-Verify system is not precise enough.

"Not precise enough"? We're not measuring the diameter of a neutron, here, or trying to launch a Moon rocket; we're trying to make sure companies don't hire illegal aliens. How much precision do you need in that kind of system? Even if it's wrong 20% of the time, that still means an 80% reduction in the hiring of illegals!

"Not precise enough" is basically them saying, "We oppose it because it wouldn't be 100% effective," which is what a lot of organizations will say when their real reason for opposing something would get them pilloried. And the Chamber of Commerce opposes this measure because it supports unrestricted immigration--because that keeps the cost labor artificially low.

Well, well, well. It looks as if the central figure behind the "Lolita Express" is not going to get the sweet plea deal he thought he'd get.

A U.S. District judge on Thursday ruled that federal prosecutors illegally signed a plea agreement with convicted sex offender Jeffrey Epstein and hid it from his more than two dozen underage victims.

You may remember, this is the guy who had notables such as Bill Clinton out to his place--and Bill Clinton ditched his Secret Service detail to go.

One invitation to one of these shindigs talked about the pool being heated up for the occasion, and that there were three girls aged 9, 11, and 13 who would be in that pool. Remember that? If that doesn't make your skin crawl, you must be a Democrat.

Meanwhile if you think that the legalization and normalization of pedophilia isn't next on the agenda, you're delusional. (Or a Democrat. But let's not repeat a tale already plainly told.) Normalizing pedophilia includes a step that the homosexuals were able to skip: the "virtuous" part, where someone says, "I'm a homosexual, but I refrain from sex." They never did, anyway, even when sodomy and buggery were illegal. (And, it must be said, in so many words.)

The APA has already begun softening the literature on it. Exactly as they did with homosexuality, it's no longer considered a psychological disorder, but is a "sexual orientation". Once that's sunk in a while, the next step is to start working on the public perception by going to the TV shows. Pedophiles will transform; instead of being total bad guys, they'll move from being sympathetic villains to main characters, and somewhere in that process, a major and well-liked celebrity will admit that he/she is attracted to children and showcase his perversion for everyone to see. The apologias will start coming out for people like Michael Jackson, Jeffrey Jones, R Kelly, Woody Allen, Lawrence Taylor, Jerry Sandusky, Roman Polanski, and-and-and.

(They've already given Polanski a shitton of ass-coverage. Whoopi Goldberg saying that him drugging a 14-year-old and sodomizing her wasn't "rape-rape", for example. And let's not forget that Eve Ensler's Vagina Monologues said it was perfectly fine for a lesbian to get a 14-year-old girl drunk and sexually molest her, as long as the girl likes how it feels, I guess.)

Why can't we have a reasoned discussion about my plans to have you killed if you don't obey? Gun confiscationists really love violence, don't they.

The much-anticipated project has taken longer to build than the Golden Gate Bridge, and it's still not finished. But the section that opened in December already is showing signs of trouble before the rest of the project is completed.

It took four years to build the Golden Gate Bridge, which is most of a mile long. This pedestrian bridge? Started in 2014--it is now 2019--and it's not slated to be finished until 2020. And it isn't a mile long, either. And it's falling apart.

Interesting bit about Stonehenge. They've figured out where the stone came from, and even better recovered some tools left by the people who built the thing.

I thought this was fascinating:

The ancient quarry-workers left behind mudstone wedges and stone hammers, which they would have driven into the cracks between the pillars to carefully pry them apart. The wedges were precision tools for delicate work; mudstone is considerably softer than the rhyolite and dolerite columns, and Pearson says that made a difference.
"An engineering colleague has suggested that hammering in a hard wedge could have created stress fractures, causing the thin pillars to crack," he said in a statement to the press. "Using a soft wedge means that, if anything were to break, it would be the wedge and not the pillar."

We think the people in the past as unsophisticated, but would you have thought of using soft rock to split hard rock, to avoide stress fractures? I would not.

Not terribly dense, but nonvolatile for a couple of weeks or so. A megabyte per chip, and its performance compares favorably with DRAM--except that if the power fails for a few seconds, the bits don't go away.

I agree--worst aparthied ever. Israel just doesn't seem to be very good at the things the left accuses it of doing. You know, being mean to arabs, banning islam, crushing the people under the iron heel, etc.

Yes, this is me, too. It wouldn't be so bad if my brain didn't then give me a Nelson Muntz "HA, HA!"