The 737 MAX has a problem: it decides it wants to dive when there is no reason to. Apparently the two recent crashes are related to this. The system is meant to counteract the aircraft's tendency to pitch up in high-throttle conditions, particularly at high angles of attack.

At the core of this issue is the new engines. Like all jumbo jet engines they're high-bypass turbofan engines, but the MAX variant has larger engines than the original 737, so they had to mount them both higher up and farther forward. This changed the center of thrust (CoT) and made the airplane more prone to an uncommanded pitch-up moment. This is bad for many reasons; for example, when you're climbing at maximum angle of climb, you don't want the aircraft to pitch up more because that could lead to a stall.

Boeing's answer was to add software: program the flight control system to put in some pitch down. The apparent problem is that in some cases the thing adds pitch-down in situations where it's not warranted. The most recent crash shows the airplane diving and climbing erratically until the crash occurred, and that looks a lot like "pilots trying to keep the plane in the air despite the aircraft's best efforts".

And the best part of this? If you pull up, the airplane ignores the input and continues to dive.

They don't do documentaries about the horrors the left inflicts on us. As far as I know, they've never awarded an Oscar to a film documenting the Soviet Union's atrocities. They don't even do many documentaries about that. It's apparently controversial to say "a state shouldn't forceably engineer the mass-starvation of its farmers."

It's not just lunacy; it's horror. All the way down.

My answer is not just "no", but "FUCK no". Does the company pay to have the freaking chip removed if you quit or are fired? Somehow I doubt it. But that's just one objection; the real problem is discussed in depth by Karl Denninger at his post there: it's a trivial exercise to track everything you do once you have one of those chips in you.

I'll stick with badges and passwords, thank you very much.

"Democrats have seen Republicans as evil for a long time, but now they're acting stupidly. Violently and stupidly." It does not help their cause when they lose their shit over a red ball cap. The stories are legion.

So, launch some new satellites. SpaceX makes that pretty cheap.

"Oh, but it's the spectrum that we need to use!" Guess what: other countries won't care. They'll still launch 5G phone networks. What will you do then, when side lobes from Europe and Asia are flooding your passive microwave receivers?

Flatly impossible. Ending our use of fossil fuels would result in the deaths of billions of people. That doesn't bother environmentalists, of course, because environmentalism is a leftist cause and leftists place no value on human life.

The funniest part of all this, though, is that the life cycle of a CO2 molecule in the atmosphere is somewhere between 11 and 18 months. The CO2 that is in the atmosphere now is not the same CO2 that was there even two years ago. The carbon cycle is working fine and is not overwhelmed by human emissions.

We lost a few things somewhere in the 1940s.

The other night Mrs. Fungus and I were going through some boxes and she found an oddly-shaped light bulb. It was a cat holding some kind of stringed instrument, and it was clearly a light bulb because it had a screw base sticking out of its head.

A quick flip over to Googe revealed that it was a milk glass figural light bulb from sometime between 1930 and 1940, probably for Christmas or other occasions. No continuity; it's burned out. But it's interesting.

Apparently this was a thing back then, though: strings of lights in interesting shapes. White glass (hence "milk glass") and then painted, by hand. Hang 'em up, plug 'em in, and they light up.

This particular bulb is not Christmas; a cat with a koto is more oriental. I can't help but wonder if Dad didn't see this when he was in Japan in 1945, picked it up, and brought it home.

Today is a lovely day. I am being sarcastic.

One of the clients I support, they're having their networks updated. What inevitably seems to happen is, once the network team leaves, problems arise. Phones don't work. Computers don't work. Printers don't work. Any one, or combinations, or all three.

Meanwhile, I am trying to support these people, and half the tools I need to access don't work, either. On one call I needed to use a certain tool used for checking user accounts, in order to make sure the caller's account was active and not locked. It took me three and a half minutes just to get into the damned tool. That's before I could do anything about checking his account or anything. We're supposed to handle our calls in 6.5 minutes--more than half that time wasted on waiting.

My whole day has been like that. 4 hours so far. And no tuna to put in my pain-in-the-ass-Mac. 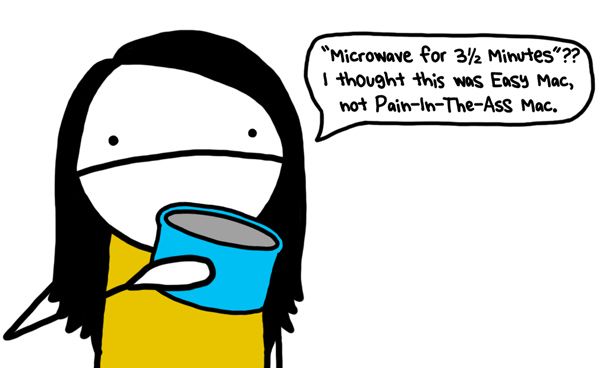