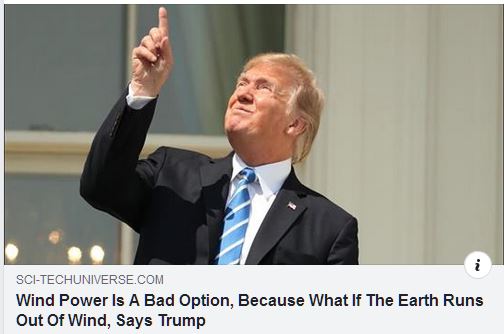 If President Trump said anything even approximating that, then it's for damn sure taken out of context.

If Pritzger gets his way, this trend will only accelerate. The taxes are too high. That's the long and the short of it; the taxes are too high and the employment situation is deteriorating, the state government is broke and flat out refuses to do anything to remedy that which does not involve increasing taxes even more.

It's not just Illinois. New York state is suffering, too, as people begin to abandon that over-taxed shithole for other, less socialist, climes.

So, the crudbucket that shot up the mosque in New Zealand was interviewed by police, who okayed him getting a gun license. In other words, the legal apparatus that New Zealand had in place to prevent gun violence failed.

There is no way to get around that kind of case, where the person who commits an atrocity is sane, rational, reasonably intelligent, and 100% committed to doing it. There is not a law you can pass which can prevent that kind of event.

New Zealand's response is to ban the types of weapons used in the attack. New Zealand can do what it wants, but this response will not prevent further attacks. It just forces future criminals either to use different firearms, or to get them illegally.

No. That doesn't work; it doesn't even work in less extreme cases, such as a mugging.

Going to have to say it again. Importing a lot of people from third world countries plus not enforcing laws against vagrancy etc--this is the inevitable and predictable result.

The reason we have laws against vagrancy stems from the very fact that any time you have humans living in camps with inadequate sanitation, these old diseases crop up. Without fail.

Understand: in the 1930s there was absolutely no question, among any of the elite, that socialism was the future. Socialism and marxism had had eighty years to percolate through the upper echelons of American society, and by the time FDR was sitting in the White House it had seized total power in italy, Germany, and Russia, and was working on China. Prior to his declaration of war on Russia, Hitler was praised by the American elite as the harbinger of the grand socialist future.

The Democrat party is still salivating over having that level of control over the American people, and they still want to use whatever means they can to seize it. Letting them get their way will result in the socialist ideal of "one person, one vote, one time."

You can vote your way into socialism. Unfortunately, you must shoot your way out of it.

The FBI is looking decidedly KGB-like, isn't it? That's not a compliment.

Let's pause to consider what just happened. The special counsel's team was accusing Manafort of a specific lie, but the document ostensibly detailing what Manafort said--the 302--did not have any record of the statement in question. So the prosecutor fell back on a supplemental declaration by an FBI agent. The 302, in other words, was so unreliable that it lacked key information on which prosecutors were basing their case.

And he went to jail anyway, for a crime that there is no evidence for.

So, if you are contacted by the FBI for any reason, do not DO NOT DO NOT talk to them AT ALL without having your lawyer present. They can send you to jail for whatever they think up.

That ape has the best statements.

The left always describes all Republican contenders that way.

Karl Denninger has more on the 737MAX problem. The guy flying the plane that crashed in Ethiopia had never had any seat time in a 737MAX simulator. "Duh!" says Karl Denninger:

That's because the FAA and other certifying authorities didn't require it and the reason they didn't require it is that Boeing intentionally designed the MCAS system to circumvent what would otherwise be a requirement to do so in order to commercially fly the plane.

But it gets even better than that: there are no simulators that replicate the MCAS behavior of the 737MAX.

Boeing did not want to introduce a new airplane that pilots would have to certify on, because that costs money for everyone. What Boeing wanted--and what Boeing gamed the system to try to get--was a new 737 variant that required no extra training for qualified 737 pilots to fly. And I'd bet dollars to donuts that this was done by someone to make himself look valuable to his bosses.

When I was at Rockwell-Collins, I saw something like that happen. A guy got a promotion and ended up being in charge of technical publications. He decided that he'd make it into a profit center, because after all R-C was the only avionics company that didn't charge extra for documentation. He'd get up and analogize about the way R-C avionics were perceived, time and again: R-C avionics were like "Cadillac", reliable, solid, useful, good; but the competition was like "Porsche", and that was bad, and R-C needed to be looked at that way, too, and the way to fix that was...uh...to start charging for manuals! Yeah! Make technical publications into a profit center instead of a cost center!

After systematically gutting the documentation teams and removing all the highly-experienced technical experts, driving out the "greybeards" and paring the workforce down, and making all the salaried employees work at least 50 hours a week, this turkey--with the technical publications department still not making a profit--got promoted into another position. None of the activity he'd undertaken was really done to help the company so much as it was meant to help him advance his career.

The quality of the manuals suffered, of course, because they'd replaced people with vast electronics knowledge with people who had English and Philosophy degrees. "Get the detailed theory of operations from the engineer," was the standard response.

Making all those changes, and leaving behind a disaster that had not yet become apparent--that guy got his promotion and his raise out of it. His successor was the one who raised the salaried workweek to 50 hours (it had been 45 under the turkey) and was unaffectionately referred to as "the little dictator" by some of those self-same "greybeards". A year or so after that was when my last few friends working there either left, got fired, or transferred to another department, so I stopped hearing about it, but I'd wager it's now a royal frigging mess. Still churning on in spite of management's best efforts to make it fail.

A nation's legislative chamber is not a day care center and young children do not belong there. Kim du Toit has it exactly correct.

Modern computers have so much nonsense going on they appear slower than old computers do. One of my friends said, "I never got an 'out of memory' error with my Commodore 64." But we frequently got them with machines like the Amiga 500 and the Atari 520 ST, computers that had 8x the memory of the C64. This phenomenon is the same.

Consider what went on with a C64. When you were writing a BASIC program, exactly one thing was running on the computer: the BASIC interpreter. That was the computer's OS, hard-wired into the thing, written in machine code (Assembly) and it took up a bit less than half the processor's memory space. It took a LOT of BASIC code to fill up the 36-odd kilobytes of RAM the thing had available for the user. Most commercial software would simply shut off BASIC entirely and thus have more RAM available. You only got "? OUT OF MEMORY ERROR" if something went wrong. Usually it was your own fault.

The 16-bit machines were different. Their OSes were written in C instead of Assembly, and even commercial software could sometimes run afoul of everything you were trying to do. You could put a RAMdisk in your 520ST, for example, but if the program you wanted to run needed more memory than was available--"Out Of Memory [OK] [CANCEL]"

Users learned what they had to do to keep from seeing those messages. The Amiga 500 had a readily-available expansion port for memory, and there was a 500kb memory board available from Commodore. That helped.

Thirty years later? My current PC has almost 200,000 times the memory my C64 did. I admit I don't often see error messages--the OS handles nearly all of them automatically--but I do see more latency than I did back then. Sometimes, when I am writing a blog post, there will be little "hiccoughs" in the text editor, so that the flow of characters onto the screen will stop momentarily, then catch up. It's distracting. It's usually caused by something running in the background; there are some processes which gack things up and I need to go into Task Manager to make them stop.

This is, I suppose, progress.

In general Luzia is the most visually stunning of the Cirque du Soleil performances I've seen. Dralion still wins, hands down, for technical excellence, but Luzia was just pretty as all get-out.

Her costume is meant to evoke a monarch butterfly, but the act is simply a human running, showcasing the human form in motion. Gorgeous!

Well, weekend's here, just about. Got paid, a week late (because I made a mistake on my direct deposit form) and have a 2-hour meeting tomorrow morning. Otherwise, this is the weekend I will paint the bathroom, damn it.

Called this morning to set up benefits, and I actually was able to get health insurance with a reasonable deductible, so that's nice. Looks like an ass-rogering is in my future. Woohoo! Colon blow! Enjoy!