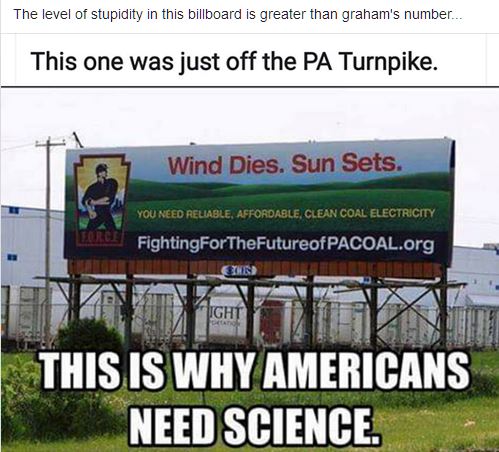 Apparently the sun does not set and wind never ceases. Oh! Or else coal is not reliable, affordable, and clean?

I hate to tell you this, but EVERYTHING ON THAT BILLBOARD IS TRUE.

The sun sets. The wind ceases. Coal is reliable, affordable, and clean.

If you think coal is not clean, it is because you did not see what coal power was like before 1980.

In 1977, my parents bought a sailboat. It was docked at the Michigan City Marina, which was across a river from a NIPSCO coal-fired power plant. The roar from that plant was stentorian and it went on 24/7; and from the 500-foot smokestack issued a constant fume of sulfur-yellow smoke.

Every weekend, the first thing that had to be done was to wash little bits of yellow grit off the boat--fly ash from that smokestack.

We stopped using that marina in 1979; and several years passed before any of us had occasion to go back to Michigan City. And when we did?

The roar was still there, but the stuff coming out of that smokestack was white. There was no yellow grit, either. The plant had installed equipment to scrub the smoke, to clear out the sulfur and the other crap, so that no particulates were being emitted.

Clean. As clean as it gets, anyway. Cleaner than wind or solar.

"Hold on!" You object. "That's not so! What could be cleaner than wind and solar?"

Take into account the whole cost of the installation. A windmill must be made. In order to make it, stuff needs to be mined. Ores need to be refined into metals. Petroleum must be extracted and refined into plastic. Everything that you do to make the raw materials used to build the windmill has an environmental cost, and it's actually a steep one; had a gander at what mining and refining rare earth metals looks like? It's not a pretty sight; the fact that it occurs in China instead of here makes no difference.

Because of all the energy expended in its manufacture, a windmill can run until it falls apart and never reach "carbon neutral", let alone be cleaner than coal power. Solar's no better. Solar cells are semiconductors, and it takes a lot of energy and a lot of toxic guck to manufacture them. Solar panels don't even last as long as windmills do.

The fact that their environmental costs are front-loaded--that they occur before the systems generate so much as a single watt of electricity--do not make them disappear, or even mitigate those costs. And there are costs of using these sources which have not been nearly as well-studied as the environmental costs of coal power, such as bird deaths, changes in weather patterns, disposal of retired equipment, and so forth.

So: that billboard is not a sign that "Americans need science". It's a sign that Americans understand science just fine.

The Democrats sure want to silence Fox News.

An article in the New Yorker last month alleged that Fox News executive Ken LaCorte spiked the story to protect Trump--a claim LaCorte has vehemently denied, saying the story lacked corroborating evidence and that the network was merely practicing responsible journalism, as were other outlets who declined the story.

That article seems to have motivated Cummings’s letter--a letter that not only seeks personal dirt on the president, but seeks information that might be used to review Fox News' editorial decisions. The committee's letter suggests that Fox News may have violated campaign finance rules if it tried to help Trump by suppressing the Daniels story.

So what the Democrats are trying to do here is to make it illegal (de facto, because they can't do it de jure) to spike any story that makes a Republican--especially Donald Trump--look bad.

In other words, they want there to be government pressure on all media outlets to publish everything nasty they uncover about Trump, no matter how fatuous or farcical, proven or not.

"Hey, I'm the person who abandoned you when you were little. Now that you're rich, will you help me?" It doesn't matter why he left. If you have children, you are responsible to them.

If you walk out on them, if you never do anything to help them even from a distance, then just stay walked.

I agree with this particularly since the new fashion is for people to be racist because they can't parse "Devonishequa" according to the rules of phonic reading and come out close to how the person so named pronounces it. ("It's pronounced 'Throatwobbler Mangrove'....")

All temperature data is not created equal. The urban heat island effect certainly does explain a lot.

My best example comes from 1988, the year when "global warming" became the big deal. The area came within one day of setting a record for drought and high temperatures. At the tail end of that time I--late at night--drove home in my dad's MGB convertible, top down, from a friend's house in the sticks. Most of the way home I was chilly, because it was a cool night--until I got into the Fungal Vale; and suddenly it was warm. I mean, ten, fifteen degrees warmer, pleasantly warm, the ideal night to be driving a convertible.

And the Fungal Vale isn't that big a town.

Leftists think it's perfectly acceptable behavior; that's why it keeps happening. How ironic (and when I say that I mean its not ironic at all) that a leftist says she bullied and screamed at an old man for wearing a MAGA hat and justifies it by saying, "You don't want to be the person who didn't speak up as we slipped into fascism."

She finds it "heartbreaking" that she was the only person in that Starbucks who was yelling at him. No; it's just that you were the only person there who was so unhinged that the sight of a hat drove you to throw an obvious and very public temper tantrum.

What a terrible excuse for a human being this alleged woman is.

...and it ended up getting her fired. Look: you can have whatever lunatic opinions you want, and if you think that a MAGA hat means its wearer is the next thing to Adolf Hitler who should be publicly shamed, you're entitled to just that opinion.

But if you start screaming at and threatening people, and in general acting like a complete fucking lunatic, you need to bear in mind that your employer may not share your enthusiasm for, eh, "speaking up", as you called it. And unless you are the absolute best at whatever it is you do for them, ever, they may come to consider you a liability.

These fucking people are insane.

England's fantastic socialized medical system is living up to its usual standard.

Now, instead of cutting wait times, the NHS is looking to scrap the goal.

How utterly like government. "We can't meet this goal, so we'll eliminate it."

What are the British subjects going to do about it? They need the government's permission to seek care outside of the government medical system.

Once a patient in England has been referred for cancer treatment, the government considers "starting treatment on time" to be if the patient begins treatment TWO MONTHS after being diagnosed.

The NHS also routinely denies patients access to treatment. More than half of NHS Clinical Commissioning Groups, which plan and commission health services within their local regions, are rationing cataract surgery. They call it a procedure of "limited clinical value."

It's hard to see how a surgery that can prevent blindness is of limited clinical value. Delaying surgery can cause patients' vision to worsen -- and thus put them at risk of falls or being unable to conduct basic daily activities.

This is what Democrats want for you, here in the USA. They want you to wait for care, and if that ends up killing you? Well, there are millions of proles, after all. Of course Democrat politicians will have a different care system that attends to them immediately, because they are important.

That's how it works in England. That's how socialism goes every time it's tried.

Boeing needs to shit or get off the pot. Starliner will be obsolete before it even flies, at this rate.

There comes a point at which a certain number of moving violations should put someone in jail. Short form: guy has no driver's license--has never had one--and has seventy moving violations on his record, including two for drunk driving. Oh, and "...twenty-two other arrests for all sorts of violent and drug offenses for which he served a grand total of 53 days in jail."

We're so used to this horseshit that it doesn't even register any longer. I thought it was a good "popcorn" movie, but it's got zero rewatch value. All the criticisms in that review are 100% accurate.

What war? Bette Midler says Trump has forced us to live through "two years of war" but I haven't the faintest idea what she's talking about.

Can't say I ever admired John McCain. Not a hero, not by my definition of the word.

The day has been one. Had a caller who thought she was talking to Comcast or Verizon and wanted to talk to my manager when I couldn't solve her problem right away. It's like, "Lady, this is level one tech support. What we do in this situation is to send the ticket to level two, because they have the access to make the change you need." "Well, can I talk to them?" "They're not customer-facing."

She wanted to talk to the manager and I had to explain that there isn't a manager here who has any more access than I do. All these issues are handled by a specific team and no one outside that team can do anything about it. Finally she rang off.

...and called back wanting to talk to "corporate". *sigh*
Collapse