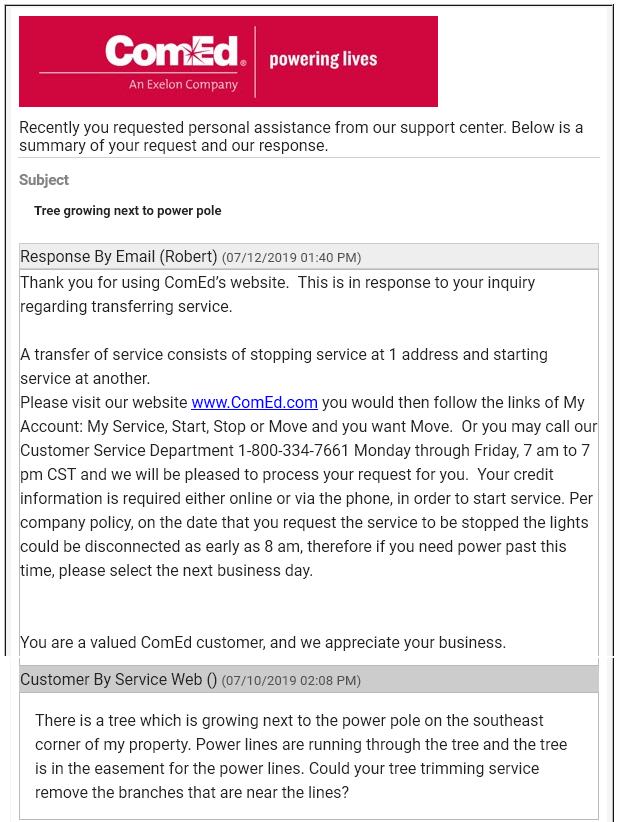 Not sure how one gets from "tree growing next to power pole" to "Transfer service" but I am positive that it's because I have a tiny little brain, and ComEd customer service is staffed by geniuses whose intellects would be the envy of people like Einstein and Newton and Feynman.

But now that I think of it, it's obvious! I mean, you can't just cut down a tree, not in this eco-conscious age we live in! I mean it's...it's a TREE! You know?

They just forgot to mention that the only thing I can do is to move now. Instead of saying, "Well, this is a tree we're talking about, so you're going to have to move out and let nature take it's course. Here's how to transfer your service when you move, so we don't have to touch that glorious gift of nature which is threatening the power delivery to three of our customers," they skipped over most of it, and just said, "Looks like you have to move!"

See, that's because I've got a tiny little brain, and they're smart people.

In my tiny little world, I think that if a tree is right next to a power pole, and ComEd spends millions of dollars pruning trees and keeping them clear of power lines, then having one of their crews stop by the bunker and lop off a few branches is an incremental cost and a no-brainer. I figure ComEd would say, "Thank you for pointing this out. The last thing we'd want would be for a branch to fall on our wires and cause a service disruption, or--God forbid!--a fire." But you see that is because I do not understand the gift of creation that is that particular box elder tree, and I live in this narrow, infinitesimal universe where the relative value of one tree is rather lower than something like safety.

...so I've posted it on Faceboob and added snark with "#ComEd", but tomorrow I'm going to have to call them and ask what the everlasting fuck they are smoking over there. I know weed is being legalized in Illinois but come on--at work? Really?

The video in this link shows a verbal exchange between Representative Horseteeth and the director of Immigrations and Customs Enforcement (ICE), one that the supposedly-esteemed Democrat loses, badly.

That guy stomps all over her. She tries to tell him that seeking asylum is not illegal, and he quotes the law stating that asylum is to be sought at a designated port of entry...so she, with her voice shaking, changes the subject.

Ah, here we go with a transcript. But then Ms Horseteeth had the gall to twiddle this piddle:

When Homan says “they can come in a port of entry,” what he doesn’t say is that the admin has practically closed ports to asylees.

Out of desperation, families do what Óscar & Valeria(the father & daughter who drowned) did: face dangerous terrain.

These are policies of cruelty.

We have mobs of people trying to cross the border, Congress refuses to increase funding to handle the mobs--Horseteeth herself voted against the increase--and yes, people who want to enter the country legally have to wait their turn. Oscar drowned because he was impatient and did not want to wait his turn. On a Sunday he tried to enter the country illegally, in a fashion he was warned against trying, all because he couldn't wait until MONDAY MORNING when the center would be open.

...and dredges that horseshit up, after the fact. If you are going to make a career out of politics, you need to be able to politick...and I don't think she can. She's very good at rattling along in the Democrat-media echo chamber; but the instant she's challenged by someone as smart (or smarter) than she, who holds different views, she can't argue her points because her arguments begin from the assumption that she's right, and she doesn't need any facts to back up her argument because of that.

So naturally, someone who's well-educated and knows his job and is smart and dedicated enough to rise to a position of leadership--he's going to walk all over her. It's clear from the exchange who knows what he is talking about, and who is merely trying to score a political "gotcha".

Because he was better prepared than she wasy. Which is why she went to twiddle afterwards.

Related, oddly enough, is this clickbait thing about fake experts getting schooled. I think we can add Mr. Homan's episode with Horseteeth to that list.

#3, though? Total bitch. Making an entire planeload of people wait because their pilot insulted her.

This story is totally believable. Trust me on this, it's not unbelievable at all. Not even remotely.

...when I was nine and wanted a hamster, it was spelled "hampster" by a lot of people. It is not the only correct spelling; "hamster" is also correct, and more people tend to use that one. Getting all bent out of shape over it is, however, unwarranted.

A positive review of Stranger Things 3 from a source I trust. Still have no intention of watching it.

Another blow to the "magic dirt" theory of immigration policy.

I'm sorry to be the one to say this but those pensions will never be paid. There will come a point at which the state will simply be unable to pay them. That will not be a good day.

Where's the damned popcorn? Feminists were the darling group of the left until gays came along. The feminists were okay with that because so many of the hard left ones were lesbians, anyway.

Now that transgenderism is the left's latest darling, though, they can't stand it, and are starting to insist that if the entity has a penis it can't be a lesbian which--of course--clashes with the left's orthodoxy du jour.

Well, that was quite a nice day.

Step one: sleep in. I actually got up at the time I normally get up during the week, but there wasn't any interruption of my sleep because Mrs. Fungus had to go to work. So I slept in.

Step two: take donations to the Salvation Army. Mrs. Fungus continues to work on clearing out the spare room and we find stuff to donate.

Step three: fajitas. We've wanted them for a few days; I took her to Reuben's. We feasted. The really nice thing about that place is that the food is fantastic, and it's not really expensive, such that we could get out of there for $60 with two appetizers, two plates of fajitas (which at $15 is one of the most expensive items on the menu), drinks, and tip. And be stuffed to the gills.

Step four: Menards, for tiki torches (to replace the ones that rusted to death) and a few other sundries.

We ended up spending the entire evening out there, until about 8 PM. Patio thermometer said 90. We lounged in the pool until maybe 7:20, then I tried to light a fire in the fire pit and we relaxed in our lounge chairs.

Only reason we came inside was because a thunderstorm was passing to the northeast and it was getting too close to us. It did end up raining a bit here, though not very much. We could hear the thing rumbling continuously, like the finale of a fireworks show, but only saw a couple flickers of lightning.

So now it's evening, we've had a nice relaxing afternoon, and it's still hot outside so we can probably swim again tomorrow, weather permitting.

I do need to cut the grass and work on tree chopping, though, so I'll try to get some of that done first. Heh.

Besides tiki torches and pool chemicals, I also bought carb cleaner at Menards. Hoping to get my bike running right.

Filled the Jeep's gas tank while we were in Indiana. $3.15 a gallon there; $3.30 a gallon in the Fungal Vale. Thanks, Illinois!

Mrs. Fungus gets these sampler packs in the mail. Some kind of thing you subscribe to, and they send you boxes of things to try out. Well, in 2017, one of the boxes contained a freaking pool ring--a big one--and today I decided we'd try it out.

The ring was too big for the old pool, but it's just fine for this one, so I grabbed it, took it into the garage, and used the compressor to inflate it. Once I figured out how to sit in the thing, I was able just to lay on it in the pool and drift around, eyes closed. Man was that relaxing. So that one's a keeper.

Anyway, now it's time to play a little WoW, I think.
Collapse