That's today. I have a few little errands to run, and a handful of boxes to put up in the attic, and then I'll be working on spackling the spare room. The idea is still to have the paint prep finished no later than Friday evening. We'll see how I do, but barring unforeseen circumstances it should not be an impossible goal.

First up, a little bloggerating.

The planes took aim, eh? NYT can't bring itself even to say "Taliban" or "Al Qaeda"? They have to blame the airplanes for the attack?

Then again, these are the same people who believe that guns cause violence, and are not mere tools. I should not be surprised.

Red flag laws are an attempt to make an end run around due process. Understand that due process is a constitutional right; that's why our government cannot legally just pick you up off the street and throw you in jail for twenty years. When you're arrested, you must be charged with a crime within 72 hours or be released. You must be arraigned, given a chance to enter a plea, and if the government wants to hold you without bail they must say why, and the judge must agree. If you make that bail they have to let you out. After that, your case must be tried; and the system we have assumes you are innocent and everyone on the jury must agree that you're guilty in order for you to be found so.

This is meant to eliminate as much possibility for error as can be done by mere humans. Our system is meant to ensure that as few innocent people are punished as possible, by erring on the side of letting actual guilty perpetrators go free. As aggravating as it is when a criminal gets off scot-free for a crime he obviously committed, it is necessary in order to protect the rights of the innocent. And actual criminals will doubtless offend again, "as surely as a dog doth return to its own vomit," so the system will have another crack at them. Usually sooner rather than later.

"Red flag" laws, however, skip right past all of that. They allow a person to anonymously report another, with the result that the victim's constitutional right to keep and bear arms is summarily removed--violated--by police. His firearms are confiscated, as are any papers he was pertaining to their ownership and usage. Without a trial, without any kind of due process, based on nothing but the word of an anonymous person.

And that "word" can be a lie. The tips are not checked for validity.

As we see with the linked case, this kind of scheme can be used by people of ill-intent as a way of getting revenge. The victim of the vile smear didn't have a gun with him. There was no confrontation, no brandishing of a weapon, no group of men staring down the scumbag. The jerkoff ruined a man's career because he felt insulted.

"Red flag" laws make no provision to eliminate misuse of the scheme. They do not attempt to weed out malicious and false reports. And this is by design. The idea is not to prevent further mass shootings; the idea is to provide government with an easy way to disarm people based on what they say.

When we make the argument that the Second Amendment supports all the other amendments in the Bill of Rights, it's making the wrong argument. The people who want to take away our right to keep and bear arms don't care about ANY of the civil rights.

And all the information you need to understand this is encapsulated in this one image that I've already posted countless times: 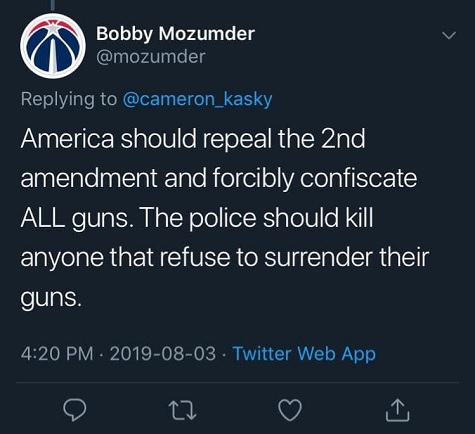 He's not saying that those who refuse to surrender their guns should be arrested. He just wants the police to kill them all. That one statement advocates stripping people of their rights under the Second, Fourth, Fifth, Sixth, and Eighth amendments. (Look them up here.)

The push to go all-electric is going to hurt Germany, rather badly. Electric cars are not ready for prime time, folks. That's really the long and the short of it. Germany's push towards all-electric is driven by the CO2 scaremongering; only 27% of their energy comes from clean "renewable" sources like wind and solar; an additional 8% comes from burning biomass (eg lawn clippings and other agricultural waste) which is even dirtier than burning coal. For electric cars, that just moves the source of CO2 from individual cars to a big power plant.

I've talked before about how much energy is in the fuel burned by cars. It's a huge number, and if you want to make your transportation system all-electric, all that fuel has to be replaced with electrons. The electrons have to come from somewhere.

Germany with fuel-burning vehicles is already coming perilously close to blackouts. There already is not enough electricity generated within the country to satisfy its needs during peak demand. What happens when that demand rises, as the nation's fleet of vehicles becomes increasingly electric? Where will the electricity come from?

Meanwhile, they're predicting a very harsh winter here in the USA but of course that's either "just weather" or more evidence of man-made climate change.

People get angry when you tell them they're going to have to take care of themselves. Who is surprised by this? The kind of people this guy is talking about are the ones who always look to the government for help in dire emergencies, and they don't understand that the government cannot help you when the emergency is everywhere.

Another movie I don't need to see, ever. 100% from the critics; you know what that means.

Especially considering that the audience numbers are usually inversely proportional to the critics' numbers.

There is a big difference in tactical and strategic readiness. As always the US is not ready for war at a strategic level. It's too expensive to maintain that kind of readiness.

Odd how these things never come to light anywhere else. When someone tried to abort a baby but it was born alive, they would leave him in a storage room until he expired.

This is known as "women's health".

Most "criminologists" are ivory tower eggheads with no experience in the real world which is why their prescriptions for lowering crime never, never, ever work.

Got up today with a headache. Still, have lots to do, so off I go. *sigh*

Got the spackle laid down. There are a handful of spots which will take some work to complete--multiple coats of spackle plus a lot of sanding--but 95% of the spackling is finished but for sanding, which is excellent progress.

Had to fight for it, though.

...woke up with a headache but managed to get myself out of here at a semi-reasonable time. First stop, Walmart, so I could get my pills--only it took forty-five minutes to get there because they're putting skin coats of asphalt on a bunch of roads around here and apparently basic traffic control is too complicated.

Took a different way back and went to Ace. There, I bought a very simple and basic single light bulb fixture to use as a temporary in the spare room, so I can have the ceiling light on. Light is vital when you're doing paint prep, after all.

Also, I bought four 2" lag bolts, and four LED fixtures. They're $3 apiece "while supplies last" and the same as the three fixtures that I bought on a previous trip. I've now got seven; I'm expecting to put at least three of them into the attic, so that when I turn the lights on up there it's going to be lit like a football stadium.

Got home, ate lunch, then started working. Put the fixture in first and screwed in a light bulb; it worked. Then I started to spackle. It took hours to do the whole room but I did it, but for one spot on the ceiling that I missed and one spot in the NE corner where I think I'll have to remove the trim from around the closet door to get at it. A pain, but it needs doing.

But the only thing I could cross off my "to do" list today was "get pills". The spackling job is not done yet. I needed to clean the kitchen but I haven't done that either (doing that after this post is up) and there were a couple of other little jobs that I didn't do, either. Getting to Walmart took up too much of my time.

Well--as long as the paint prep (including masking) is finished by the time Mrs. Fungus gets home from work on Friday, I don't really care all that much. Tomorrow I can take care of the stuff that didn't get done today, probably while I'm waiting for the second coat of spackle to dry on those handful of spaces where it needs it.

That'll do, I suppose.
Collapse