I took a muscle relaxant yesterday afternoon, after getting back from the pharmacy. Perhaps an hour later I got so sleepy that I just went to bed; and when my wife got home I barely knew what year it was...but my back didn't hurt.

Got up and we had dinner, though, and I stayed up until about 10:30, at which point I returned to bed. By that time the pain was back, more of a twinge than a real pain, though it got me good when I laid down. Slept like a rock all night; got up and went to work today.

And while my day was not pain-free, it was considerably more comfortable than any of workdays of the past two weeks at least.

It hurts a lot less today. When it does hurt, it goes away faster. I'm able to walk normally.

And so I will take the muscle relaxant again tonight, and each succeeding night until I can go an entire day without my back hurting.

I cannot, however, discount the role that the steroids are playing in this. Steroids reduce inflammation. So I take 30 mg 3x per day for two days, then stop. That gives the muscle relaxant time to do its thing, and let the strained muscles heal and stop being swollen.

Speaking of progressives, Via Pixy Misa we have a nice collection of tripe for your perusal: 9 reasons to thank the USSR: How we got the cold war wrong. All nine points in that list are utter bullshit.

First up, the canard about the Red Army being what won WW2. The Soviets' ability to produce war materiel was so stellar, they could only equipped every other man with a rifle. The ones without were told that when they saw someone with a gun fall, they were to pick up the gun and ammo. The USSR lost all those men because Stalin treated them with the casual contempt that leftists always have for the proles. "There are millions more of them." And because the USSR could not produce arms and equipment in sufficient quantity and quality to match Hitler's army. Remember, an army is only as effective as its supply line. Amateurs talk strategy; professionals talk logistics.

If that war had been Hitler vs Stalin, instead of Hitler vs. Stalin and America, the outcome would have been very, very different. The USSR could not hit Germany's industrial base as effectively as America could, and Germany would have kept shooting Russians all the way to Moscow. Let's thank the USSR for sending so many young men into a meat grinder.

Second, the thing about nuclear bombs. Japan was not afraid of an amphibious invasion, not even if the USSR was involved. But once they found out we could bomb entire cities out of existence using weapons they had no defense for, they folded. Let's thank the USSR for that!

Third, right there they admit that the USSR had a shit economy that couldn't produce needed materials. But it doesn't tell the whole story, either. The fact is, those materials weren't available for civilian housing because the USSR was building up its military. We see the same kind of situation in North Korea today: civilians starve, military people eat well. It's all about allocation of resources. Let's thank the USSR for caring more about its military power than the comfort of its disposable class.

Fourth, BIG SURPRISE that toffee-nosed idiots were Soviet spies. We should thank the USSR for that?

Fifth is an out-and-out lie. "Never found" any communists? He found them by the bucketload. Proving they were communists was the problem. And to make things even more entertaining, following the collapse of the Soviet Union, KGB files corroborated many of his accusations! Thanks for infiltrating our government, USSR!

Sixth, "Virtually all revolutions during the Cold War were homegrown," which is sort of true as long as you add, "with a great deal of help from the USSR and communist China." The Viet Cong were supplied by the USSR and China. They did not make their war materiel themselves. There were communist spies all over the world trying to foment communist revolution, and the communist nations helped every last liberation front and revolutionary council with money and weapons and expertise. The communist revolutions were "homegrown" only in the sense that the people who fought them did not come from outside the countries in which they occurred. Let us also be thankful for the fomenting of bloody revolutions!

Seventh, "The US never fell behind the Soviet Unionin the development of nuclear weaponry--there was never a bomber gap or a missile gap." Except that there was a missile gap. Remember that little thing they did in 1957, launched Sputnik into orbit around the Earth? Something that America could not do at that time? The launch of Sputnik was meant solely to show the entire planet that the USSR could now drop a thermonuclear warhead on any spot on the planet that it cared to target. That was the message Sputnik sent, flying across the sky, radioing its periodic beeps for all to hear. The approximate translation was, "If I were a nuclear bomb, you'd already be dead!" The paragraph finishes with saying that the US "...created the first solid-fuel intercontinental ballistic missile." Sure. The first solid-fuel ICBM. But the USSR had liquid-fueled ICBMs at least as early as 1957. The Sputnik Rocket? A modified "R-7 Semyorka ICBM", sez Wikipedia. Thanks, guys.

Eighth, why the everlasting fuck am I not surprised by this? But I don't see what the USSR has to do with this, nor do I understand why I should thank them that Jimmy Carter's asinine presidency did more damage to the US in four years than had been done since Woodrow Wilson. Shit!

Ninth, an all-out nuclear exchange between the US and the USSR would not have left Earth "...a charred and lifeless planet." But we need to thank the USSR that we were "lucky", I guess.

In short, the whole article is nothing but a regurgitation of leftist talking points that have no resemblance to reality. It's fatuous bullshit.

Had a thought today while listening to Limbaugh.

Some polls done by the GOP found that, in the wake of the impeachment thing, Trump's support among the right-wing has only gotten stronger. But, more interesting, among Democrats in key battleground states, about 6% are starting to think that the impeachment stuff is nonsense.

The thing is, this is happening because the past three years have been a constant drumbeat of accusation and investigation, all of which turned out to be UTTER NOTHING. The foundation for the latest sham is a call for which Trump released the transcript in its entirety, allowing all and sundry to see what he'd said, and proving that nothing illegal happened. It's obvious that the Democrats' continued harping on this issue is nothing but political theater, and it's wearing thin because, for fuck's sake, enough is enough already. Give it up and accept the fact that you lost the 2016 election!

But: if this thing had cropped up after three years of no bullshit--if it had been business as usual and everything was going well and then the Democrats came out with this thing, I think the reaction might have been different. The electorate would not have "baseless investigation fatigue". The numbers might have shifted in the Democrats' favor had they waited until they actually had something, even a nothing of the quality of this latest nonsense.

...basing that on the fact that they're going ahead with "impeachment investigation" despite everyone knowing it's bullshit. The political theater might have worked, absent all the other shit they've extruded in the last three years.

But instead, the Democrats started investigating that idiotic Steele dossier, which was nothing, and they were frothing at the mouth, so incontinent in their need to GET TRUMP at all costs that they didn't stop to think about what would happen if the gambit didn't work. And after the "Mueller's just a doddering old man" show, it was manifest that the gambit had not only failed but had backfired on them. You'd think that'd be enough; that they'd be smart enough to say, "Okay, we blew it, so let's concentrate on winning in 2020."

But no! They doubled down on it, and they've done so in such a spectacularly inept fashion that "stepped on their own dicks" doesn't even begin to cover it. I mean, they're doing things that they wouldn't do if they wanted to throw the 2020 election on purpose! Okay? Legalizing unlimited "even right after birth" abortions? Refusing to enforce laws against public urination and defecation? Refusing to help ICE detain immigrants who have orders of deportation against them? Raising the bar for "petty theft" to nearly a thousand dollars? Calling for the elimination of fossil fuels? Not condemning obvious and blatant anti-semitism? "Concentration camps"? And this endless parade of investigations into the Trump administration?

As interesting as this is, I don't think it's quite as big as Borepatch thinks. The problem with using hydrogen in the place of fossil fuels is that hydrogen is...tenuous.

Take a look at this picture of the Space Shuttle external tank, part of a rocket that burns liquid hydrogen and liquid oxygen: 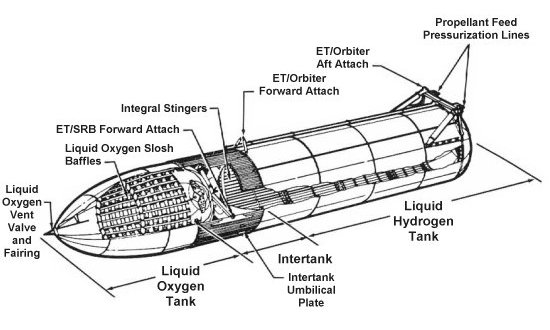 Notice how the back two-thirds of it is liquid hydrogen tankage? In contrast, the front third is liquid oxygen. The density of liquid oxygen is 1.141 grams per cubic centimeter, a shade heavier than water. The density of liquid hydrogen is 0.071 grams per cubic centimeter! To make water, you need two units of hydrogen for every unit of oxygen, but because the densities are so different you need a lot more volume for the requisite number of hydrogen atoms.

A couple big cylinders of compressed hydrogen gas won't take you nearly as far as the equivalent volume of gasoline. And because the hydrogen molecule is so small, getting the fuel system gas-tight (and keeping it that way over the lifetime of a typical car) would be a frigging nightmare. And don't even get me started on the idea of using cryogenic hydrogen.

On the other hand, though, hydrogen gas is what's used for running fuel cells. Hydrogen and oxygen combine in the cell and make electricity, with fair efficiency. So cheap hydrogen might be a way to make fuel cell automobiles more attractive.

AIDS virus is mutating because it's politically incorrect to take steps to prevent its spread.

Democrats love to punish people for doing the things they do all the time.

"Chicago youth" going on rampages. Stealing, beating people, and so forth, with impunity because the police aren't allowed to stop them. This is why I hate going into Chicago.

I knew most of this already about WD-40 but it's still interesting to read about.

November 13th in Japan and the Toji Beach live cam is still running. A couple days ago I saw some people trying to catch some waves out there, so it must not be all that cold. Which is even more amazing when you consider that the beach in question is at about the same latitude as Indianapolis.

Today, when I got to work, it was 48° in my office. After an hour and a half I took my coat off and put on my hoodie, because it had risen to 56°. By afternoon it was 66°; because I had the heat pad on my chair, for my back, I was comfortable working in shirtsleeves. But by quitting time the temp had fallen to 64° and I was starting to feel chilly even with the heating pad.

Because my office window faces south, I can open the blinds and get a little solar heating going, which helps. A little.

Hard to believe it's only mid-November.
Collapse