Well, we're trying. Mrs. Fungus has been laid low by some sort of stomach bug. I had to run out to get Pepto Bismol--thank God Walgreens was open--and it's looking like Christmas dinner will have to wait until Saturday.

Anyway, I'm trying not to let that dampen my own celebration too much. She's now in the "I don't want to eat anything; just let me sleep" phase now that the Pepto is doing its thing, so I've been reading a book (via our traditional "open one present on Christmas Eve" thing) and listening to Christmas music from Pandora. I'll probably have leftover Chinese for dinner and count myself fortunate that I haven't also succumbed to whatever she's got, at least not on Christmas.

I always have this thought myself. An enlarged heart is sign of heart failure, and that's bad. Poor Grinch.

A beaver who wants a Christmas tree?

The import of laying baby Jesus to rest, wrapped in swaddling clothes, in a manger. Real-world foreshadowing.

A very interesting explanation of what sort of structure was actually the setting for the nativity. Wish I'd read that article last week, before I wrote my Christmas vignette....

Conditions are gradually improving for all mankind which is something to celebrate.

This was the front yard after that blizzard: 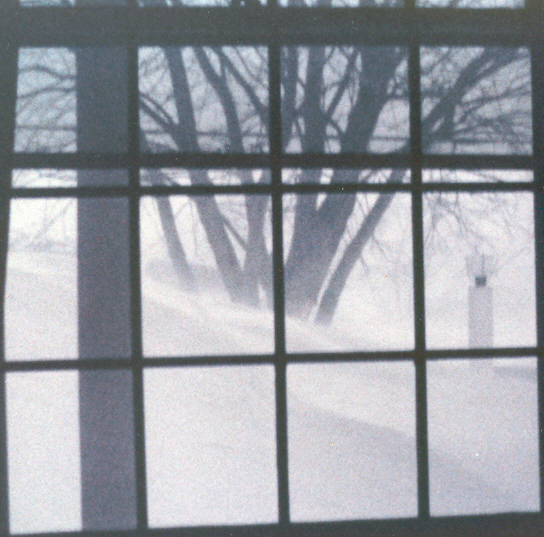 XKCD has a Christmas funny today: 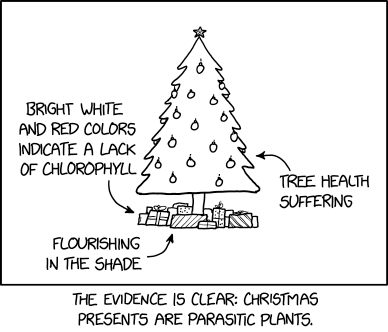 The stretch of days without sunspots has ended with two Cycle 25 sunspots popping up on the Sun's surface. 277 days in 2019 without sunspots. It's not a foregone conclusion that there won't be more spotless days, but sunspots tend to last a while, and with about a week left in the year that 277 is probably going to be the number for 2019.

So, discovered two things about the train set in rapid succession: first, that the original oval featured just two 10" straight sections after all. I don't know where I got the idea that there were more than that, but after watching the video from 2013 of the train's first running, I realized my error.

Second, with the additional four 10" sections I bought, the layout is big enough to properly go around a Christmas tree. I think next year I will buy more track, because I know I'll be buying another rail car for the set, and it'll be nice to keep expanding it year after year that way.

I actually thought about setting up a permanent layout downstairs, in fact, but that's probably another one of my pipe dreams. There's not enough room down there as it is, for everything I'd like to do; adding a train layout is probably beyond the pale.

Fun to dream, though.

Everyone have a merry Christmas!
Collapse