Sanders staffer says "Gulags weren't that bad!" Spoken like a true member of the party faithful!

Over at Borepatch, ASM826 says that Bernie Sanders "...needs to fire his Iowa organizer and disavow his statements."

Ace embeds the Project Veritas video, but expect YouTube to take that video down pretty quickly. Anyway, the guy's own words, Trump voters will have to be "re-educated".

Over at GunFreeZone they compare him to Lavrentiy Beria, and they're not far wrong.

Look, you fascist, socialist little turd: the gulags were not only "that bad"; they were worse than you can imagine. I don't think anyone living in America right now can imagine what kind of hell the gulag actually was for those who were incarcerated in them. Not even people in prison--because we house criminals in comfortable conditions and make sure they've got food to eat and don't work them to death, but give them books and cable TV and exercise equipment and-and-and.

Someone explain to me why an American city--Philadelphia, no less, the birthplace of our republic!--is honoring the 70th anniversary of the communist takover of China?

Hey, guess what? If you live in Illinois and you want to get a sex change operation and are on welfare, Medicaid will pay for it! Isn't that lovely? The list of benefits our totally fucking broke state gives to people who pay no taxes continues to grow! 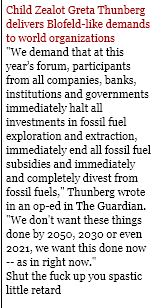 This classic list of author types by Larry Correia and I'm "S" right now. I'd like to jump to "K" but first I need to finish this damned book....

The Republican Party needs to learn how to fight. That's definitely so.

1,000 criminal aliens just let go to commit more crimes. Rather than given to ICE to be repatriated to their home countries.

Science fiction mainstays all sacrificed on the altar of Social Justice. "Rise of Skywalker" is struggling to pass the $1 billion mark. Doctor Mary Sue's new season is a ratings bomb. Star Trek: Discovery is a ratings disaster and if it was on broadcast TV it would have been pulled by now:

Its ratings are very bad, though CBS tries not admit that. The ratings were bad enough that Netflix, which had partnered with them to air the show overseas, laughed them off when they wanted a new financing partnership for the next season.

Reportedly the "Picard" series is getting a second season, but I have heard nothing about the first season. Did it even air?

The show's going to be about Trump and Brexit, with Star Fleet reimagined as a Galactic Bully that needs to get its nose bloodied by #TheResistance.

The guitar "fuzz" effect was an accidental discovery. Neat.

Signs that we live in a nanny-state dictatorship. These are men in a locker room choosing to celebrate their victory by smoking cigars, and the nanny state comes in and threatens them with arrest if they don't put them out.

As expected, the 8" snowfall that had been predicted for Friday is now 3". I expect further reductions.

Today the sun came out for the first time in a week.

That's all for today.
Collapse