I do not trust China or any of their statistics. They just quarantined forty-six million people to stop the spread of the new coronavirus. Sixteen whole cities.

...yet they claim a thousand people are infected and 41 people have died. Do you quarantine 46 million people across sixteen cities for a mortality rate of 4.1%? "Experts warn that there are probably closer to 4,000 cases in China alone." And if the mortality rate is really 4.1% (and not higher) then that means 164 people are dead, not 41.

The spread of a pandemic is exponential and in a bit less than a fortnight there'll be a quarter of a million cases in China.

There are 63 cases in the United States. Stay away from crowds.

Here's a nice collection of links. 2,000 people traveled from Wuhan to England alone in the last two weeks. Lovely.

And a plague means everyone suffers, even those who avoid becoming sick. An industrialized economy requires a certain number of workers to support. Why do you think "Rosie Riveter" came into being? So many American men were being shipped overseas we had to have women fill their shoes in the factories.

The United States needs to put a complete moratorium on accepting flights from China. Refuel them and send them back. Do not allow anyone off the plane for any reason whatsoever.

So, the removal hearings are going on in the Senate.

I heard this on the radio today and laughed out loud. President Trump is as popular as the last few most popular Presidents were at the height of their popularity RIGHT SMACK DAB IN THE MIDDLE OF THE IMPEACHMENT PROCEEDINGS.

Part two of "Democrats and hypocrisy" thing is the fact that several Democrats voted against aid for Ukraine even though now they're saying that President Trump's delaying of aid to Ukraine (which is something every administration has done, ever) was so terrible an abuse of power that he must be impeached.

This is so awesome. Trump speaking at the "March for Life" rally. No President has ever done that before, not even the ones who were pro-life. I love it!

The people of Puerto Rico are just a little bit miffed that their government withheld aid from them during a disaster to make a political point.

What we have found out since Hurricane Maria killed more Americans since 9/11 was that the government of Puerto Rico actively worked against the residents of the island.

The government hid water, threw away MREs, and hoarded supplies in warehouses.

They did it to line their pockets, gain credit with the #Resistance for making Trump look bad, and to ultimately exercise control over the people.

It is not an understatement to say that this is Soviet levels of corruption and maliciousness by government officials.

A riot is an ugly thing and mob action is not "justice", but the outcome of any FBI investigation will be--at worst--a few years in country-club-resort-style prison. Honestly, when a government consipires to make its people suffer like that, and a great number of deaths result which could have been prevented, there need to be executions.

The government of Puerto Rico is no better than that of Stalin or Pol Pot or Mao or Castro. People died because the government purposely withheld aid to them in order to make a political point. If you don't think that's evil, or at least cannot understand why people would see it that way, you're probably a Democrat.

"When a government actively starves its citizens to death for political reasons," goes the penultimate sentence of the article, "being sent to a comfy minimum security prison for a few years isn't a proportional punishment." It's not even close.

The machine does not want Bernie Sanders to be the Democrat nominee. The Democrat party does not want Bernie Sanders even to be in the race let alone win nomination. They know he can't win against Trump, and that if he somehow managed to win, he would utterly ruin the economy. The gravy train of power and perks for the rich and connected would end (because it would be economically unsupportable) and they'd end up starving and freezing in the dark just like they want the proles to.

But he's really not electable. Bernie Sanders had his day in the sun in 2016; by ignoring the expressed will of their voters and making Hillary the nominee by fiat, the Democrat party gave Donald Trump a huge gift at the ballot box: a bunch of Sanders supporters simply didn't vote.

We got lucky: a Sanders presidency would be a disaster.

Let's be clear about one thing--Bernie Sanders is not cute and he's not funny. He's an unrepentant adherent of a vicious ideology that has butchered better than 100 million people in the last hundred years. The risk of electing a doctrinaire Marxist is open civil war--with his murder-fetishizing acolytes on the anti-freedom side.

Why do students have to be given time to go vote? Polls open at 6 AM and close at 7 PM. The only trouble I have ever had with going to vote around work and other activities was remembering there was an election.

This is for high school kids.

Only people over the age of 18 can vote. Why is this necessary?

...because Democrats want votes, that's why.

There was an episode of The Orville like this. That was the episode with the race of people who had determined that babies born under the wrong astrological sign were liars and criminals, and it was a pretty fucking stupid episode, and it turns out there are real people who do this.

And their votes count the same as yours!

I wish they'd do away with that idiotic doomsday clock. It's been within a few minutes of midnight since the asshats started in with that nonsense in 1953. Oh! It's only 100 seconds to midnight now WHY?

But the one thing that is measurable is the degree of inaction on climate change. As the US withdraws from the Paris climate agreement, the world as a whole has done little to meet the deadlines agreed to, with efforts to meet the numbers needed to keep average global temperature from increasing more than 2° Celsius falling well short. The most recent UN Climate Summit ended without any solid plans to move forward.

What a bunch of arrogant bufoons those assholes are.

Today's XKCD is so right it makes my brain ache: 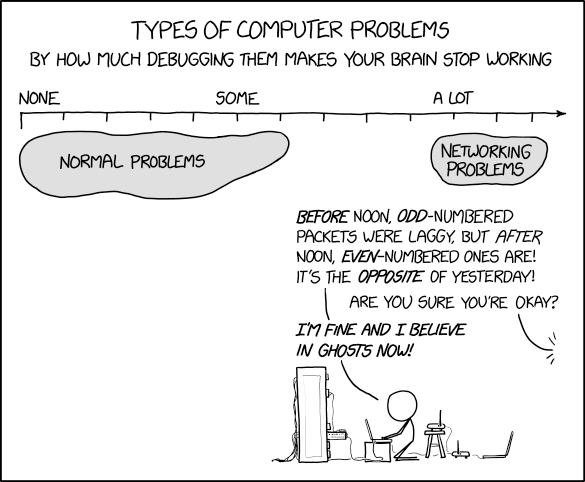 I don't even get into that level of detail with fixing network issues and yet I feel that comic 150%. That is exactly how it is.

Oh, speaking of technical stupidity, there's this thing I saw on faceboob: 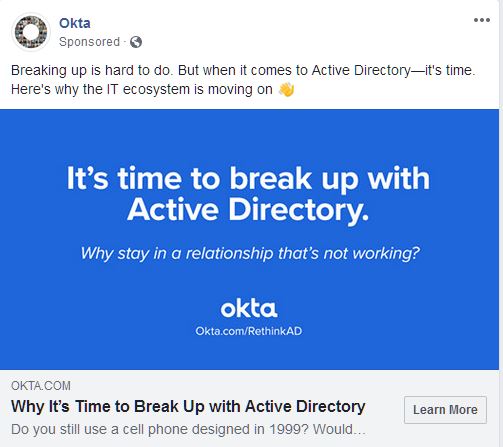 At my last employer I suffered to support two clients who ran in an Okta environment. It was the worst shit ever.

The simple fact is that Active Directory works. There is just one thing about it that I would change: somewhere, I would add a notification that a user's password had expired, probably in the account tab just above the place where you're notified that the account has been locked. Otherwise, AD does everything you need to do with regards to account management, and it does it quickly and painlessly, and its simpler functions are even fairly intuitive.

Okta uses a web interface. It's slow. If the system is not configured just right a password reset won't take. Its two-factor authentication is for the birds even when it works right, and usually it does not.

"Do you still use a cell phone that was designed in 1999?" Asks the ad. Of course not. But the modern smart phone is an improvement over what was available in 1999. That's not the case here; Okta is not better than AD, not by a long shot, and in fact its more recent vintage counts against it.

I'd rather use an old tool that just works than replace it with something new that doesn't work as well, solely because the old tool is old. Especially not for a critical function like user authentication!

That's about it for today.
Collapse