91% increase in infected Chinese, overnight. Fatality rate is still around 3% but it's looking like this thing is more infectious than they originally thought it was, which is a bad thing.

China currently has about 30,000 people under observation for symptoms of the virus. So it's a good bet that the number of infected right now is a good deal higher than 4,295.

Highly infectious and potentially lethal, two traits which, together, are uncommon in a new disease. Usually it's one or the other.

Wuhan province is home to one of China's bioweapons laboratory. Coincidence?

About the death of Kobe Bryant: the preliminary findings, all of which are utterly unsubstantiated, indicate a controlled flight into terrain, consistent with poor visibility.

According to the Associated Press, investigators suspect that the chopper that was carrying Bryant and eight others likely crashed because of unfavorable weather conditions, including a thick fog that required Bryant to obtain special permission to fly. At the time of the crash, conditions were so poor that the LAPD and county sheriff's office had grounded its helicopters.

Saw a press conference about the investigation, and they're begging people for images or movies of the area so they can judge what the weather conditions were like.

It's a bad idea to try flying in shit weather with no visibility.

You know, instead of burying it, we could try reprocessing and recycling spent nuclear fuel so that we won't leave so much of it laying around.

So, Bernie Sanders is the current favorite. Wouldn't that be something if that old communist finally got to run for President? AS Vox Day says there it would probably move the minority vote firmly into the Trump camp.

Second City Cop makes an interesting point here. Government worker pensions are protected by the state constitution. Pritzker's progressive income tax requires that the state constitution be altered. At the same time they made that change, they could also eliminate the pension protections.

Anti-gun doctor tries to score victim points and instead beclowns himself. Here's a handy tip: if you're going to print a "death threat" and stick it under your car's windshield wiper, at least pull the car out of your fricking garage before you take the picture, you fucking ass goblin.

"You'd think a guy that smart would come up with a better hoax," the post says, but in fact doctors are some of the dumbest smart people out there. And the higher up they've risen in their chosen profession, generally, the dumber they are everywhere else. It's not actually because they're stupid; it's because they get so used to thinking they're smart, they forget that they don't know everything.

Incompetence is not capable of realizing its own incompetence--and the smarter you are, the more likely you are to think, "Heck, I'm really smart! Of course I can do this!"

Larry Correia brings the snark: "Police are probably on the look out for two buffed Nigerian dudes in Maga hats, while I'm assuming the doctor is tossing his ink jet printer into the Baltimore harbor."

Man, I was seriously depressed today, so bad that I couldn't function. I flopped around in the office trying to get things done, and was not doing very well. Finally, a little while after lunch, I plugged headphones into my phone and then started playing cheerful anime music--and that helped a lot.

By the time I got home I was chipper and feeling good. Made chicken fajitas for dinner--they were delicious--and have leftovers for tomorrow's lunch. Can't complain about that!

I noticed something: Hajimete no Gal, all the characters have the same face, more or less. A few minor differences around the eyes. When they introduced another girl with blonde hair (besides the eponymous gal) I had trouble telling them apart.

My wife pointed out to me that all my characters have the same faces, and now I can't unsee it, which is why drawing manga has been...deprecated. Even though this is my motto when it comes to drawing manga: 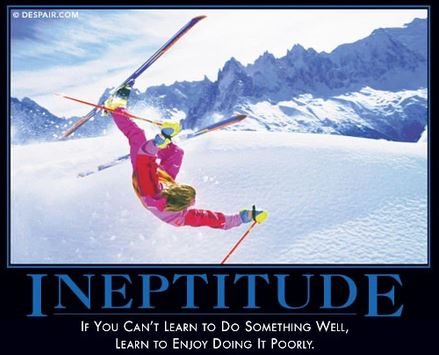 Anyway, happened across Sono Bisque Doll wa Koi wo Suru which is about this guy who wants to make a career out of making hina dolls, only he meets a girl at school who's into cosplay and he starts making costumes for her.

This panel, in chapter 30, made me laugh out loud for quite a bit: 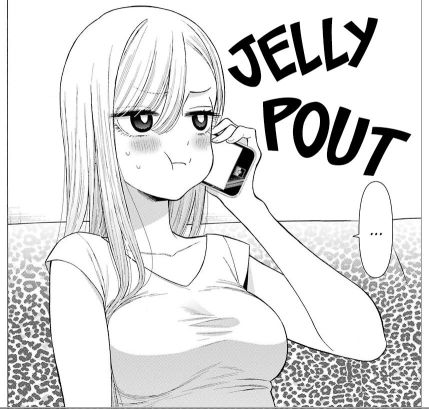 "Jelly" meaning "jealous", because this girl talks like a teenaged girl does. 100% in character and it made me laugh.

It's shaping up into quite a nice love story.