Washington Post is publishing a book. Title: Donald Trump and His Assault on Truth. It is, supposedly, "a compendium of mendacity" exposing all the "lies" Trump has told during his presidency. It acccomplishes this, I am certain, by stripping the statements of as much context as possible, and by spinning what he said fast enough to form a Kerr ringwarp and thus open the way into a timelike space. This is what all such books do. (Like, for example, failed comedian and Senator Al Franken's book, Rush Limbaugh is a Big Fat Idiot.)

Here, near the bottom, it claims Trump said, "I have the greatest economy in the history of this country," and it claims he said it on December 18, 2020.

Now, I know that President Donald J. Trump PBUH did in fact say those exact words, but I don't own a time machine; I don't recall the exact date he said it but I'm able to say for the record here that he definitely said that in the past, relative to today, May 24, 2020.

Getting the right date is pretty simple. I will type "trump greatest economy quote" into Googe and see what comes out: 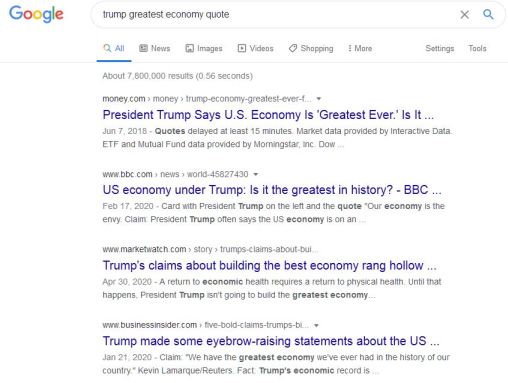 That's just the first four, but the very first one suggests that he said it in June of 2018. Now, if that ad for that stupid book said "June 7, 2018" instead of "Dec 18, 2020" do you think people would bother to go see when he actually said it, thus just perhaps maybe throwing the accuracy of your entire book into question--because you couldn't get the date of one quote out of TWO correct, for the sake of an ad?

Incidentally, any post correcting my grammar is ignored. You're not paying for this, I'm not selling anything, and IDGAF whether you read this or not, honestly. I worry about grammar in the stuff I'm asking people to buy, but this ain't that...and in fact half the time I make an error in grammar, I mean to do it.

"Assholes, mask has a carbon filter in it." Alyssa "the amazing genius" Milano therefore has a second do-nothing layer in her do-nothing mask. Adding a porous filter atop a porous filter does not magically make the mask non-porous. The uselessness of her mask is far over and above, by the way, the fact that the masks we're all supposed to wear do nothing to prevent the transmission of COVID-19.

Early March, 2020: "Don't wear a mask if you're not sick! It won't keep you from getting the thing and it might actually increase your chances of falling ill!"

May, 2020: "Okay, everybody wear a mask! We need to prevent transmission of this thing!"

Does no one remember that? We were told explicitly not to wear masks, because they wouldn't do anything to prevent contracting the illness. For those who were already sick, they could help transmitting it to others. Somewhere along the line, though, suddenly everyone needed to wear a mask or else the entire population would keel over dead.

Interesting thing I heard the other day, on Limbaugh: remember that silly congresswoman who had sex with the help or whatever and ended up having to resign because she was getting naked with her aides and talking about it in public? There was an election held in that district to fill her seat. It's a district that went to Hillary in 2016, the election was held entirely with mail-in ballots, and a Republican won it.

The Democrat voters of that district--in general--could not be fucked to fill out their ballots and mail them in, and the Republican voters could. Result: GOP victory in a Democrat district. That's really what it amounts to.

State of Michigan thought a violent, mentally-ill man belonged in a nursing home instead of a psych ward, with predictable results. Man was diagnosed with COVID-19, and Michigan's rules say, "Send thee to a nursing home!" which is the absolute worst place to send ANYONE with COVID-19 let alone someone who is violently psychotic.

The absolute worst part was that the nursing home didn't do anything. It was people looking at the Internet, seeing the psycho's social media posts, and calling the local police that stopped him.

And remember, the only reason this was stopped was that the young man posted the videos of him beating up the elderly online and the internet reported it to police. The nursing home did nothing until that point.

There is going to be such a huge fucking lawsuit over this, and there should be, and I desperately hope and pray to heaven that the state of Michigan pays through the ass for this.

The nursing home should be run out of business. Not doing anything to stop violence like this is 100% willful neglect. You don't find a helpless man, severely beaten, and say, "Whoops, I guess he fell out of bed!" and cover it up.

Palate cleanser: the time-honored figure-8 trailer race. I have to confess something.

I, who loathe the wanton and willful destruction of useful machinery, cannot get enough of them.

When I see a YouTube video where someone is doing something wastefully idiotic with a car ("How does honey work as an engine lubricant?" You moron! You're wasting a car and a bunch of honey!) it just annoys the shit out of me. I can't stand people who break useful things solely because they can.

It's an entirely different ball of wax if the item in question is already beyond repair. A good example was the Kia car with a bad engine knock; the guy filled it with Orbeez to see what would happen. The engine was already ruined; all he did was to ruin it some more.

...but in a demolition derby you take a usable vehicle, remove most of its interior and all its glass, and then you deliberately run it into other, similarly-prepared vehicles until only one is able to move under its own power.

Generally the cars used are indeed well past their servicable lifetimes. Maybe something is so wrong with it that it can no longer be used on the highway. You don't spend $3,000 on a derby car; you try to spend under $500, and even that's pushing it.

With modern vehicles, though, demolition derbies aren't really all that fun any longer. "Crumple zones" are why; cars are designed to fold up in a collision. This makes them a lot less damage-tolerant than they once were. And there are a whole host of other reasons, things like fuel injection and computer control and half a million other little details.

So the "sport" (if you can call it that) has evolved, and now they do things like the video at the link: hook a scrap trailer to a scrap truck, have everyone drive around a figure-8 track, and sell tickets to people who want to see the mayhem. Whoever can still move under his own power at the end is the winner, and otherwise there are effectively no rules other than those implemented for safety's sake.

Anyway, today is Sunday. The rain held off until late afternoon yesterday, and it was raining a bit here and there overnight; but today it's sunny and no rain is really expected, or at least not much.

I need to hit the store for a few sundries I forgot yesterday. Probably will take the bike for that trip.

I was thinking over the whole idea of invulnerability the other day.

I'm talking about Superman-level, where a person is utterly unaffected by any kind of physical phenomenon. Atom bomb? No problem. Bullets? Trivial. Strap your ass across the muzzle of one of USS Iowa's 16-inch guns and fire a salvo? Better have a replacement for that gun on hand! Oxy-acetylene torch to the eyeball? Stop it, or you're going to have that annoying afterimage thing going on.

Drop the guy into the Sun and he still wouldn't die. (Hope he can fly like Superman, though, or he's not getting out....)

What if you drop him into a black hole? He's not going to get "spaghettified" by the tidal forces. Superman can fly faster than light; if this guy can't, he's not getting out, but he's also not getting killed by the black hole.

I've tried and tried to think of a physical limit to "absolute invulnerability" and I can't. Of course there comes a point at which a human-sized body simply cannot dissipate the energy effectively, but we're talking about magic-comic-book invulnerability and Superman has never met a physical effect he could not surmount except for whatever kryptonite does to him, however it does it.

For the purposes of the thought experiment I stipulated that our subject was vulnerable to magic. I don't mean Clarke's definition; I mean real arcane magic, "eye of newt" etcetera. And so I realized I had a mook who could take the detonation of the Tsar Bomba in the face, but could be wiped out by a first-level mage casting "magic missile".

Here's to holiday weekends! We don't get another one until July.

Took the bike out to run some errands and she ran like a top the whole time.

...I could get the thing up to 55 MPH but trying to go faster--especially in 6th gear--led to the engine revving way up and the bike slowing down. Argh etc.

I'm going to adjust it (and of course at some point find a shop to adjust everything) but I want to see if I need to replace the clutch, first. I'm betting that's a "yes".

Well, a set of clutches doesn't cost an egregious amount of money, and I have the service manual to tell me how to do it, so I should be okay.

Come to think of it--what's the clutch like in the spare engine? Maybe I could use that one? Probably wouldn't hurt to take it out and examine it, anyway, to see if it's usable.

But it felt good to ride my motorcycle today. Really, really good.
Collapse