Other than minimally. Just links, do with them as you please.

The rioters in Grand Rapids, MI, are mainly rich white kids for reasons that mystify me.

Most "protestors" are antifa or hard-core leftists.

As long as antifa continues to serve the purposes of the "deep state" they will continue to get away with their atrocities.

Asshole antifa parents brought their little girl to a riot for use as a human shield.

Chicago is a dumpster fire.

Just look at the current news broadcasts to understand why you need an AR-15.

And finally, a blockquote, just to spice things up a bit. Democrat cities hardest hit.

As it happens, the cities that are burning are governed by Democrats. They are all sanctuary cities. Most of their mayors are inept and incompetent. When their citizens rise up in anger, the mayors declare that it not the fault of the rioters. They are not to be held accountable. They are to be forgiven, because the real problem is Trump. And the real problem is racism. Among those trafficking in this nonsense is the mayor of Minneapolis, the epicenter of the rebellion. One needs to say it but Minneapolis Mayor Jacob Frey comes out of this looking like a complete pussy.

He didn't need any kind of crisis for that. Holy shit, he looks like one just standing there.

The world is a mess and I think I'm just going to pretend it's not for a little while longer before I start working on today's chores.

Let me preface this discussion of my repair of my bike's clutch issue by saying that I am now living in abject fear of how smoothly that job went.

After the last post, went back to bed and slept until afternoon, then went outside and cut the grass. After that, started working on motorcycle.

Got everything (almost) arranged and in place before I started work. Still sitting on the floor to work on motorcycles because I haven't got a lift yet--haven't gone back to, or called, Harbor Freight since my initial attempt to buy one--and probably will not before June is out.

Disassembly was pretty straightforward. Tore the side cover gasket getting it off--I think. It might have already been torn; anyway it's torn in a spot which won't see much oil laying against it, so it ought not to leak much, if at all. If it does, I can always get (or make) a gasket for it. No big deal.

With the ignition trigger and advance assembly out of the way, and with the cover off, I was presented with the clutch assembly. The bolts that hold it together popped loose a lot more easily than I was expecting them to--easier than they had with the spare engine--and I wondered if that was related to my issue. Still, pulled the pressure plate off and had a gander at the first driving plate. It looked identical to the known-good ones from the spare engine, so I decided to go get the caliper and check these for wear.

The result was that the drive plates were all 3mm in thickness, which is well within limits. The caliper I was using doesn't have tenth of a millimeter resolution, so I had to eyeball it, but the steels were a single width of the marker line thinner than the ones from the spare were. Looking at them, I could see that the pattern of oil-retaining dimples on their surfaces were not uniform, and were worn around the edges.

Pondered this for a bit.

The springs--I measured them and found my problem: the wear limit for the clutch springs is 38.4mm. None of these springs were longer than 36mm. One (at least one) was 35. And that would explain why the clutch slips under high load conditions: insufficient clamping force. And the springs from the spare motor were all 40mm.

Thought it over; the springs were definitely bad but the steels were iffy. Finally I decided that I'd go ahead and replace the steels, along with the springs, because I did not feel like having to do this again. But the friction plates were all good--well within specification--so there was no reason to replace them.

So: used the OE friction plates and the spare steels, and springs from the spare motor; reassembled everything and buttoned it all up. Dumped in all the 10W40 I had, which wasn't enough; so I went to O'Reilly's and got more oil, as well as license plate bolts for Mrs. Fungus' bike and a set of 6-sided dice tire valve caps. Always wanted a set for the bike, so why not?

Filled the crankcase the rest of the way (for a total of 2.6 liters of 10W40), adjusted the clutch according to the manual, and then took her for a short spin--and it was night and day. I mean, the clutch takeup was smooth and not grabby, and the pressure point is in a pretty good spot.

I have some more adjustments to make before I take it to the shop, but I think we're pretty close to that point. The rear brake needs adjusting, as well as the brake light switch for the front brake lever.

I may ride her to work tomorrow, depending on circumstances. We'll see. But the clutch has been a minor issue that I've been living with since I bought the thing, and I think I got it fixed today.

I saw this Faceboob entry first: 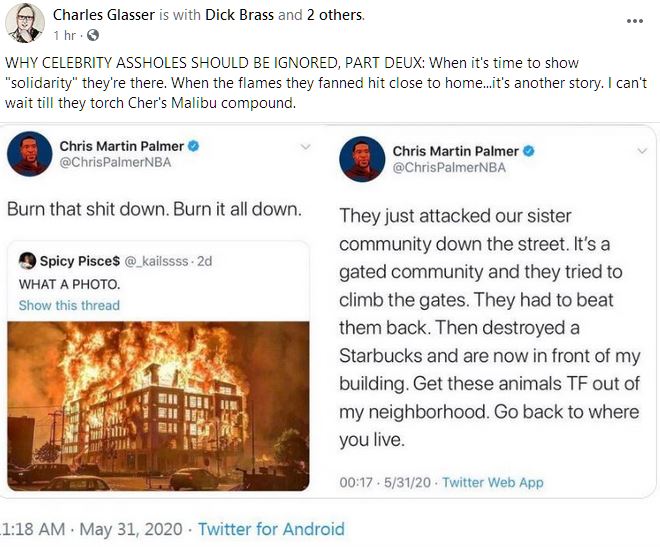 As long as it's not his property that's being threatened, he's all "BURN IT ALL DOWN YEAAHHHH". A black man who plays a kids' game for a living and makes millions doing it--he's 100% on the same side as "Black Lives Matter" because he's also an oppressed black man. But as soon as his neighborhood is in the crosshairs, he's all "get these animals the fuck out of my neighborhood".

The problem? They are "other people" to someone.

Larry Correia points out that "29 of the 30 places that had rioting last night have democrat mayors."

We went back through the last fifty years the other day and could only find one riot with a republican mayor and one with a republican police chief. There could be others we missed, but overwhelmingly democrat ruled.

So the places with racial unrest, where people are mad because of police brutality? They are and have been run by democrats the vast majority of the time, continually, often for stretches of forty years or more.

Everybody in charge of the justice system you are angry at, mayor, police chief, judges, prosecutors, the DA, etc. Overwhelmingly democrat.

It all comes back, pretty much, to the question of time preference. The shorter your time preference, the closer you are to being an animal. "Get these animals TF out of my neighborhood," says one person. Well?

When I went to the parts store, I listened to the talk between the staff as I shopped. Apparently the AutoZone down the street has a sign in their door advising people just to STAY AWAY. The person managing the O'Reilly's I was at was planning to close the store early, at 6 PM. Not because there has been so much as one iota of protesting or violence around here, but because they just don't want to get caught there IF something goes down.

I don't expect much here. This is a bedroom community; there's one strip of businesses in the main part of town (over a quarter mile away) but otherwise it's mainly private residences. People own their own houses around here.

But a mob is not sentient, either.

Whoa, that got kind of grim, there. Let's finish on a high note.

Today was severe clear, and gorgeous--exactly as May weather ought to be, with sunny skies and pleasant temperatures. The rest of the week is also forecast to be about the same.

The COVID-19 restrictions are easing up and there's a chance we might be able to go out to dinner soon. Here's hoping!
Collapse