Today, had to go to a memorial service with my wife. Her best friend's daughter died in April and today was the memorial (because "social distancing") and I'm a good husband who tries to support his wife in trying circumstances.

The death was drug-related; the decedent was 35 years old. My wife wanted to go to the thing to be there for her friend, and I went to be there for my wife. This is how it typically works, there is nothing wrong with it, and I am not complaining about the necessity.

But funerals are tiring, even when you personally didn't know the deceased. We went out for dinner afterwards, then got home and collapsed.

I still feel flat. Well, that's a part of it.

I think, for the duration, I am going to avoid going into Chicago. An actual shootout on the Damn Ryan at rush hour.

The gangs are the problem. Their propensity for incontinent violence is what's driving this summer's record death toll, and the feckless incompetence of Chicago's city government in dealing with gang crime is the root cause of this.

I have no desire to be caught in the crossfire in the latest skirmish in that city's ceaseless gang war. I'm not allowed to carry a gun (because law-abiding citizen) even while the gangs can have whatever they want and the worst thing they face is having their guns taken away from them, especially since the courts are letting nonviolent gun violations (such as "carrying") out on recognizance bonds and the prosecuting apparatus is declining to prosecute the violations.

...as long as, that is, the perpetrators are black and have rap sheets. I expect a white suburban guy, who is otherwise a law-abiding citizen, caught carrying a firearm inside Chicago city limits would have the book thrown at him.

Speaking of leftist utopias, you are now required to be pansexual. Anything else is "bigoted" and "transphobic" and "homophobic" and God knows what else.

If this keeps going this way, gays are going to find themselves hoist on the same "tolerance" petard on which they hoisted the rest of us.

"Only in current times can gays come under attack for not liking vagina, all in the name of progressivism!"

Leftism is intellectually incoherent, at least until they successfully seize power, at which point all the "useful idiots" find themselves facing firing squads because they're politically unreliable. The State will not allow such disruptive elements to survive to be used against it!

Cribbed this from somewhere: 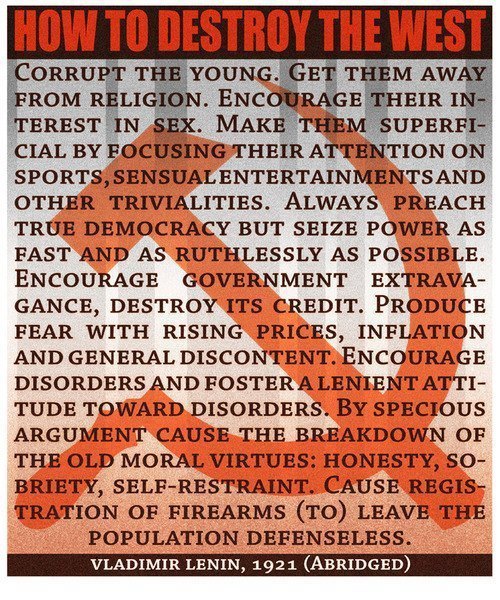 Here's the thing, though. Having a preference for specific genitals is "transphobic". Are you telling me that our sexual preferences are a choice? I thought they weren't; you people have said and said that a person cannot choose his sexual preference, and that training someone to have a specific preference was impossible.

In the case of being a gay man, for example, we've been told time and again that it's not a choice, that gay men are born that way. When presented with "retraining" programs, they are scoffed at because "it's not a choice!" and sexual preference is immutable.

So, what do these folks propose to do about people who are "transphobic" because they prefer one type of genitals? Okay, that gay man above, he only likes penises. He's transphobic, and that must be corrected. So, can he be trained to like vaginas? That is, can be be cured of his homosexuality? Or is he just supposed to metaphorically hold his nose and have sex with that vagina-having person that looks like a man? At some point this turns into rape, you know? You're forcing a person to have sex with someone to whom he is not attacted.

As bizarre as it is, the sexual revolution has gone from "free love" to "coerced love".

Painting "black lives matter" on the street in front of Trump Tower leads to a hilarious retort. No idea if this is real or not, but I absolutely love the fact that we have a sitting President whose known personality is such that I cannot definitively say, from here, that it's just a Photoshop. Trump is capable of doing something like this.

I will not accept any kind of identification scheme that requires an implant or tattoo, even temporary. 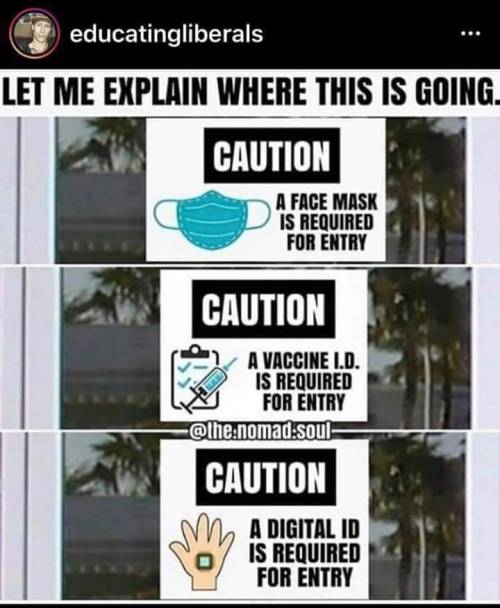 Something like that is coming. You think either that I'm a religious nut, or cracking jokes, when I talk about "the Number of the Beast", but I am not kidding and I am not off my rocker. But you know what? I don't even need to go that far to defend my resistance to that kind of scheme.

All I need to do is to remind you that the Nazis tattooed serial numbers on concentration camp inmates.

If a government requires you to have a permanent mark on you, in order to be allowed to live your life, you are nothing more than a slave and a prisoner. You're not free. Your existence is tolerated; your life continues unhindered at their pleasure, and any time they like, they can seize you and torture you and starve you and execute you. Because what can you do, when your movements are tracked and you can't buy or sell without first having your RF tag scanned?

I will starve to death under a bridge before I let them put that mark on me. Not just because I personally believe it would consign me to hell for eternity, but because I was born a free man in a free country and I will not let them enslave me.

Now, let's lighten up a bit.

...been watching Ranma 1/2 on Hulu, and got caught by something: the first season is longer than it used to be.

Here's the thing: Ranma 1/2 was a wildly successful manga series, and in the Bubble Economy days anime series were long. Urusei Yatsura was about a billion episodes, for example, and that series was created by the same artist that created Ranma 1/2.

Rumiko Takahashi, in fact, had three big series before I even knew about anime: Urusei Yatsura, Maison Ikkoku, and then Ranma 1/2; and after that last series, Inuyasha, which was also a huge hit.

But the Ranma 1/2 TV series hit a bit of a snag. It was, in fact, two separate productions. The first series was 18 eps long, shorter than a full season, and its ratings weren't as good as everyone had expected them to be, so they skipped some things to introduce a popular character sooner.

The thing is, Ranma 1/2 is a martial arts series; but the flow and the feel of the first season were more like that of Maison Ikkoku (which had just finished its run). MI was a romantic comedy, not a fighting series. I liked the feel that first season had, but its target audience (tween boys) did not.

So, they skipped ahead to the introduction of Shampoo. I never really liked her, myself, for several reasons, but evidently she was extremely popular with the Japanese market. It didn't help; the first series got canceled

The series is a bunch of episodes, of course, each taking 2-3-4 eps to resolve the latest conflict, which is always someone coming to defeat Ranma for this or that reason. 90% of the time it's either something his father did, or else it's to challenge him for the hand of this or that girl, or to win him away from Akane.

After several episodes of introductory material, where we get to know Ranma and Akane (the male and female leads), the first challenger is Ryoga Hibiki, who wants revenge on Ranma. Next, Kodachi, "The Black Rose", who wants to marry Ranma. Third--and skipping over a segment of the manga--Shampoo arrives from China to kill Ranma. After that, first season is over.

They rejiggered the thing and produced the Ranma 1/2 Nettouhen series, which is done more in the style of a fighting series, and it carries on for 143 episodes.

Viz Communications is who brought Ranma 1/2 to America, and when they first started out they were damned good with dubbing. They hired really good voice actors for the various roles and put serious effort into making the dubs as good as they possibly could. Rather than shrug and say, "This can be half-assed since it's a kids' show," they actually took the job seriously.

Oddly enough, that's what the Japanese do. They don't just shrug off the job when making cartoons for kids and say, "Eh, it's good enough for a kids' show." The voice actors try their hardest, the animators do the best they can, and everyone involved actually tries to make the best product they can make. Here in the US, people who make kids' shows don't take that kind of interest in them, and it shows. So the people who were translating and dubbing Ranma 1/2 actually had the same mindset as those who originally produced the show--and that shows, too. The early Viz dubs were really good.

...and when the producer who had been in charge of Ranma 1/2 left the company, that showed as well. The quality dropped. Viz dubs became a joke. I don't think it's coincidence that I lost interest in Ranma 1/2 about that time. That's probably why I have videotapes of that show which are still in their shrink wrap.

But back to the rewatching of the series--

Watching it on Hulu, I was enjoying it immensely. Just had it on in the background while playing WoW, you know, on the second monitor. And suddenly, after the "Kodachi" arc, the opening theme changed.

...and they went ahead with the "figure skating" story. Okay, yes, that's where it went in the manga, but this isnt the manga! That was eps 7, 8, and 9 of season two! And then, once that was done, back to the first season, a filler ep, right ahead of the 3-epsiode sequence that introduces Shampoo.

This is the problem with Viz: they fuck with stuff.

When they were publishing the Maison Ikkoku manga, they just cut a set of chapters because "Americans won't understand what's going on" and "it's not very interesting." Further, they had the main character trying to learn Spanish (he was memorizing English vocabulary for college entrance exams) and pull a bunch of other stupid crap like that. To be fair, a lot of translators do that, for misguided reasons, but I think Viz did it first, and worst.

And so here's what they did with the Ranma 1/2 anime for its release on Hulu: they put the episodes into the same order as the manga, rather than leaving them in broadcast order.

I can't make any sense out of it. Further, when I look at the episode list on Wikipedia the broadcast dates line up with my expectations for ep order but the "No. in Season" column makes no sense to me.

Oh well. No one cares, anyway.

It sure cooled off outside. Low sixties, and dry enough that we've got the windows open. About time--but hot weather is predicted for later this week. Summer, after all.
Collapse