Loud warning: Unhinged woman screams in rage when she learns Ruth Bader Ginsburg has died. Screams like a two-year-old being told "no", looking like every toddler meltdown you've ever seen, except that she literally salts her words with F-bombs.

Here is another classy reaction to the news but it's all text so you don't have to turn down your speakers.

In that former link, the--I can't call her a "woman" because that implies some measure of adulthood, and she's just a toddler throwing a tantrum--screams, "RUTH! YOU JUST HAD TO MAKE IT TO 2021!"

These people are acting as if she chose to die, or at least as if she had some say in the hour of her death. Given the evidence, I'm positive that if she'd had a choice she would have remained alive until January 20, 2021...or at least November 4th.

RBG was diagnoised with cancer in 2009. 2016 was seven years later, so I expect that's why she thought she'd beaten the odds. Further, the Democrats were convinced that Hillary was a shoo-in. After all, all the polls, all the news critters, the conventional wisdom--everything said she'd be the next President. So why retire?

You have to understand: when the left cannot get its way at the ballot box, it turns to the courts and sues until it gets a ruling in its favor. Abortion was their biggest victory with this method but it was not their only one. Having a SC that reliably votes left is essential to the long-term goals of the left. If the right wing is able to swing the court right, a lot of the left's agenda can simply be undone the same way it was enacted.

You know it's coming: 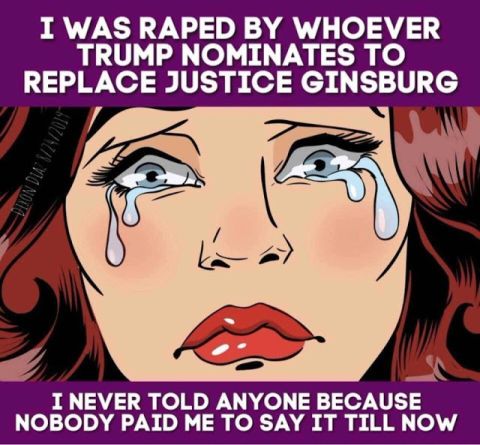 After the Kavanaugh fiasco, though, and given that Americans have hit their fill line for manufactured scandal, I have to wonder how effectual it'll be.

You idiots do realize that Beethoven was Born in Bonn, Germany, in 1770, right? I'm confident that whatever else Beethoven might have been, he most certainly WAS NOT BLACK. Not being born smack-dab in the middle of Europe in the latter half of the 18th century, he wasn't.

I turned on the heat last night. When I did, it was already down to 68 in here; with the outdoor temps dipping to the low forties, it was not going to get warmer before it got a good deal colder. It's not October, but it is the weekend that contains the autumnal equinox, so it's all good.

Yesterday, I was just plum tuckered.

I was simultaneously happy and annoyed. I mean, Thursday evening's work on clearcutting the old garden area, that was a lot of effort expended, and I even got to the point where I periodcally had to stop moving for a bit. I'd haul a load of branches, drop them in the pile, face the wind and take a few breaths, then start moving again. Not because I couldn't keep moving, but because I was getting fatigued.

So I expected my muscles to ache Friday...and they didn't. They just felt tired, is all. My entire body was suffused with a heavy physical fatigue, but there was no pain at all. That's very weird for me; usually after making an unusual effort I'm a mass of aches the next day. So I felt good that I am apparently in good enough shape that the physical effort only made me tired; but it also annoyed me that I didn't get any improvement in my conditioning out of all that work that I did.

But I had to go to the far off-site and wander all over it in my protective gear to get a rough idea of what the WiFi coverage looked like, and when you're already tired that's just not an attractive proposition. I mean, the site is five and a half acres and I needed to cover a lot of ground. I went, even so, and took my readings and made my estimates and-and-and.

At lunchtime I was just done, but "miles to go", so I went. Back to the office (and tromped across the plant to Shipping where I worked on that computer) and then to my near offsite to plug in a recently-repaired UPS.

I noticed, on my way home the other day, on the motorcycle, that all the cars are gone from Balmoral Racetrack. When was it that I saw them...? But the parking lots, formerly full of Volkswagens which had been recalled due to "Dieselgate", were empty. I wonder what happened to them?

Just after noon, now, and I've been up for a few hours. So if I go back to bed now, technically that's a "nap" and not "sleeping in until afternoon".

Went to get the ingredients for meatloaf and bought a couple of instant ramen bowls: SPICY BEEF, they said.

I couldn't finish it. I ate about half of it before the accumulated spice got to be too much for me. Then I gave up and had a PBJ instead. But my mouth is still burning. I hope my taste buds don't fall off.

Enjoy your new rules. When you want to go back to the old rules, let us know. Trump stated that 3,000 people did not die on Puerto Rico after hurricane Maria. It was less than 20 when he left the island--departing after his post-disaster visit--stayed there for a while, and suddenly skyrocketed to 3,000 dead, and he mentioned this in a tweet.

Apparently the guy didn't like this assertion and told Trump, via twitter, "go fuck yourself with a pineapple". He can't help but sneer and posture about "Trump's victims", claiming that Trump is at fault for the deaths. (Rather than, y'know, the corrupt local government that kept aid from the people who needed it so they had backdrops to pose in front of, for the media.)

As a response to this dildo's unhinged Trump Derangement Syndrome, a bunch of pro-Trump folks started mobbing him. Much the same way SJWs target and mob right-winge writers they've decided to cancel.

By the way, according to one commentor, "The book has a character named Fonald Plump. Fonald. Plump."

...such insightful and biting political commentary!

You can't be powerful in the USA unless you take "the ticket". That's how certain elements want it, because that way they own you and can make you do what they want. Like that judge who set antifa rioter bails at one million, only to have a change of heart and reduce them by an order of magnitude.

"Judge, here's a couple of snippets of your browser history from last week."

"Aieee! How do you have that?"

"Do you really think we can't get into any computer we want to? Now, you're going to keep really quiet about this meeting--it never happened--and you're going to have a change of heart about those bails you set when our lawyers come visit you next week with a petition."

"Do you think those assholes can afford decent legal representation? They're complete failures. Without the Organization the best they'd mangage would be salting french fries and pulling lattes. For the time being we need to keep up our end of the bargain, and that includes 'no one goes to jail'. For now. Bah--I talk too much. So: let 'em have a reasonable bail, that's all we're asking...or else the world learns just how much you like to look at--"

I am not saying or implying that the judge in this case has any kind of serious perversion or kink or fetish or paraphilia. Maybe it's "My Little Pony" fanfic, which would ruin the appearance of austere, sedate judiciousness. Maybe he likes furry futanari shotacon manga. Maybe he's just a regular guy but his wife doesn't like it when he looks at pictures of pretty, naked twentysomething women with large breasts. Maybe it's something else entirely and not even remotely sex-related. Whatever it is that the Organization has on him--whatever the Organization has on everyone who's a member and subject to its notice--they always have a lever to use to keep people in line. "We gave you this power and prosperity, and we can take it away in an instant--and ruin you completely in the process."

...and so when you take "the ticket" you do what you are told to do, no matter what you personally think of it. After a while you get used to doing it, and the requests take you farther and farther beyond your former principles.

There's all kinds of things you get to do, all kinds of perks and luxuries and temptations and delights...but o Lord when you pass on and finally meet your Maker, the price you pay....

Well, that grass ain't gonna cut itself. I'd better get moving.

Cut the back grass and then went to work on the cupola roof. Cut four panels out of the aluminum I bought, got the bottom edges bent over, and have one glued on and curing.

I really hope that the adhesive I bought will not turn into a solid brick. I've got the end of the tube plugged. I suppose I ought to go buy a couple more tubes of it, just in case.

Tomorrow I'm going to stick on another piece of sheathing, then go up on the roof with my wood hardener and putty and some tools and tend to the base. The adhesive I bought has a 24-hour cure time, so I might go buy something else just so I can get this done a little quicker.

Then I came inside, watched the last few minutes of Trump's speech in North Carolina, then went into the kitchen. Put together a meatloaf, then got the dishes cleaned up and put into the washer. And, it turned out I had most of a load, so I started the thing.

So once the sides of the cupola roof are sheathed, I'm going to run flashing down the seams--probably about 2" wide--and affix that with small wood screws. Then I need to make something for the top, a pyramidal cap of some kind. Ideally I'd like no water to get through to the wood underneath the aluminum sheathing; in practice I know that some moisture will. A little bit is fine, I suppose, because as long as the wood doesn't get soaking wet it will last a really, really long time.

It's exterior grade plywood, not particleboard like the last one was. That should help.

Once the sheathing is on, paint--flat black Rustoleum, at least two coats; and then I mount the weather vane. That'll take some doing, but I'll drill holes so I can use bolts with thick fender washers on the underside. I can use silicone caulk to seal those holes. Make sure everything is properly mounted and correct, and then it gets affixed to the cupola base which will--by then--be restored and painted and ready for its new roof.

I've painted the underside of the roof with the same paint I painted the top side--white exterior paint--but I'll do a coat of black around the same time I'm painting where the sheathing folds over the ends of the roof panels.

One thing I could do, if I wanted--and I can do it practically whenever I want--would be to add a solar lighting system to the weathervane: a panel, a battery, a control box, two or four LED spotlights. I intend to use screws to mount the thing to its base, so I can remove it as needed.

Guess it's time to go make the salad.
Collapse