Cold morning, "wintery mix". *sigh* Well, autumn, and it'll be November in a few days. Get used to it.

Just in time for the house to be all closed up for the next six months, we have a Mystery Odor.

The entry foyer, something smells there. Not a lot--just enough that you smell something that stinks when you first come in. Smells like someone just blew the bottom out of the toilet, or one of the cats carpet-bombed the litter box...but it goes away fast because it's not really strong. But every once in a while you'll catch a whiff of it.

The problem is, when you try to find it, it doesn't get stronger; it gets weaker. It fades right out, and it's not stronger in any particular part of the foyer. I've looked in the closet, behind the louvered doors, in the crawl space, in the basement, in the laundry room--nothing. A faint whiff, just enough to make entering the house unpleasant.

Cleaned the cats' litter boxes last night (but they're in the master bathroom) and took out the trash. Did the dishes, too--no change.

The only place I haven't looked is the attic, because it's a royal pain to get up there, but I think I'm going to have to. *sigh*

Last year, 75,000 Americans died of the flu. 75,000 people dead from a viral infection. It's a tragedy, really it is, because each one of those deaths left a hole in the lives of their friends and relatives. And I have some good news for you.

This year, we had almost no flu deaths!

So, at a Trump rally, they had WiFi for the press.

Nope, not the attic, either. I checked. *sigh*

..."better than nothing beta" and it costs $500 up front for the gear and $100 a month for service. But let's just imagine that your other choices for Internet access are:

1) Dialup (is that even still available?)
2) Getting Internet from a geosynchronous satellite
3) Using 4G LTE data at $ASSRAPE if you go over a handful of gigabytes' usage

Dialup: I actually don't think there are still dialup services in North America. What's Googe say? Googe says yes; for example, NetZero is still operating. So you can still surf the intartubzorz at glorious 56K bps!

Of course, actually doing anything more complicated than sending text-only emails will take fourteen hours, but go for it.

Geosync: Go ahead and click that icon to open YouTube. Each image will take a minimum of 0.54 seconds to download; when you click on a video, it will similarly take half a second before it starts to play. That's probably not so bad, but if you want to play, say, World of Warcraft, you might as well forget it, because that kind of latency makes the game unplayable. No on-line games for you!

4G LTE: Believe it or not, there are still places in the United States where you actually don't get cell service. Most of them are out in the boonies where you also don't get cable TV. If you are lucky enough to get a good 4G signal, well, let's just look at Verizon. Their "unlimited" plan costs $60 a month for 25 Mbps speeds, and the latency is okay, but it's not actually unlimited because once you use more than about 10-15 GB of bandwidth, you're throttled down to 56k speeds.

Starlink: Starlink is saying speeds, during beta testing, should vary between 56 Mbps and 150 Mbps, though there will be periods where there is no access. Latency, they say, will be much lower than geosync (because the satellites are a couple hundred miles up, rather than 25,000 miles, so it takes 1 millisecond for the signal to get from your dish to the satellite, rather than 130 ms). Speed-of-light delay for Starlink is 0.004 seconds where it's 0.540 s for geosync service.

$100 a month is reasonable for broadband service, and once they're actually looking to sign up subscribers, wholesale, there'll be deals for the equipment.

It's the way of the future, all right.

Of course, leftist shitheads are screaming about the "Elysium Effect". They're unhappy that only rich people (at least, at first) will be able to afford to go on rocket flights.

I dealt with Elysium in an earlier blog post--years ago--and made points different than those in the linked post. But those are also good points.

Myself, I still say that a world with the kind of AI they have access to in that movie cannot be poor...but of course if you have the culture of, say, sub-Saharan Africa in charge of the economy, they could routinely have blizzards dumping three feet of gold leaf, and it'd still be an unremediated shithole. *sigh*

Just saw a mention for a YouTube video, "Cardi B terrified of Trump supporters in Las Vegas".

One week from today is the election. Hoo boy. The left is, of course, promising unprecedented rioting if Trump wins.

Basically, they're going to throw a temper tantrum--and I don't think I'm the only one who is (or who will) view it that way. The asshats had to stop because their bullshit was hurting the Democrat party's election chances; what makes them think that anyone's going to be tolerant of it after the election is over?

Don't count on knowing the outcome of the election on Tuesday night, though, because the Democrats have promised they are going to draw it out as long as they possibly can, using every last excuse they can think of. The point is to make sure that Trump is not declared the winner before January, so that Nancy Pelosi can pick the next President. (Except...what if the Democrats lose their majority in the House?)

Just to make it plain: if the Democrats are allowed to steal this election, there will never, never, ever be another fair election in the United States, ever again. They will pack the Supreme Court with leftists, they will eliminate the Electoral College, and they will put restrictions on us that make the COVID horseshit look like make-believe.

What if it's a runaway landslide for Trump? I mean, not just a landslide, but the ultimate freaking avalanche, a cometary impact of world-ending proportions that sees every state go red? What if he nails the popular vote as well as the electoral college and you need a microscope to find the districts that went blue?

Next Tuesday is going to be some value of "exciting", I can tell you that. I just hope it's not the "exciting" which requires firearms.

So I started fiddling with MakeHuman, which is a freeware human figure modeling program.

Generated a random figure and just tweaked it a bit here and there to move it out of the uncanny valley. Maybe fifteen minutes' worth of fiddling produced this: 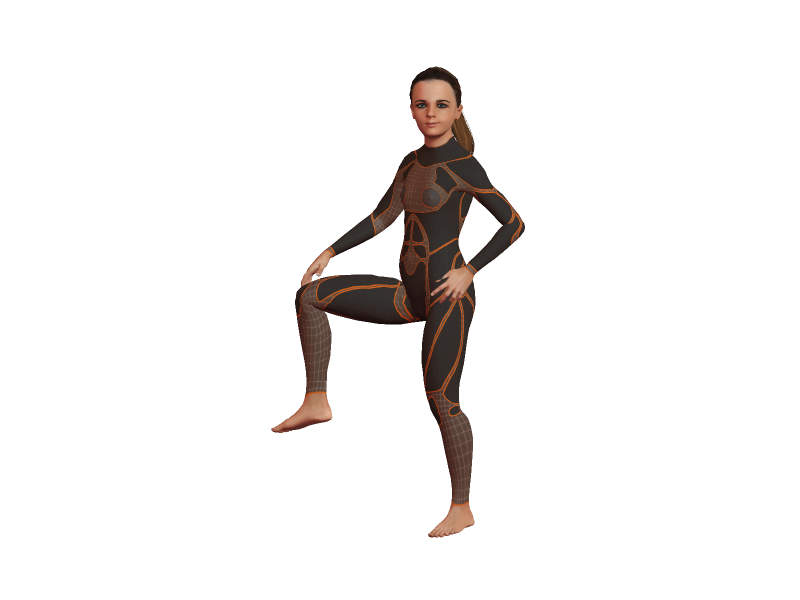 No background or anything but not bad for the first effort taking less than 20 minutes. It's amazingly powerful for a free program.

Don't know what I'll do with this, though; I discovered the program and thought, "That looks neat! Let's try it!"