Hate coming home from work being that tired, because then I need a nap, and when it's bedtime, I'm not tired and can't sleep.

On my way home from work this evening I listened to Kerry Livgren's "To Live For The King" and was able to hear it perfectly thanks to the new muffler. My brain is still expecting there to be a RUMBLE from the passenger side rear seat right after I release the key at startup, and it's just...not there, and it's a thing of beauty. And it's supremely nice being able to hear the stereo.

The smell of the downstairs freezer has entirely dissipated.

That's okay, though; I've got plenty of spackle to sand in the bedroom. 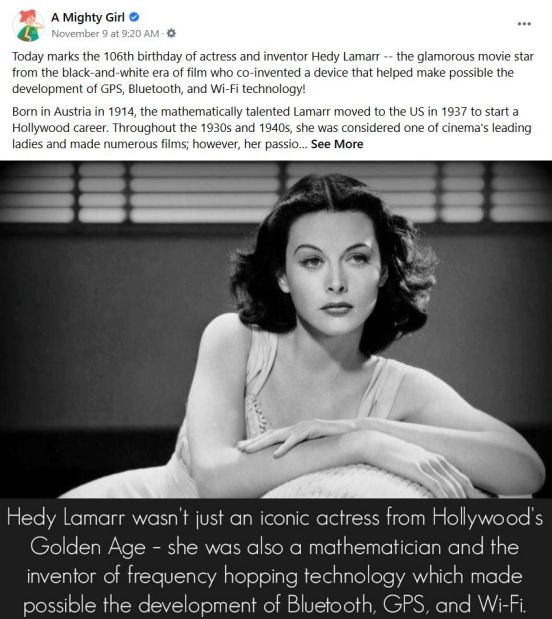 Don't they have anyone more recent they can point to?

I get kind of tired of the "women and minorities" boosterism from certain sectors, because after a while it starts to strike me as kind of "us, too!" It is meant, I suppose, to offset the fact that fantastic strides made by western civilization is 99.997% the result of the efforts of white European men.

Any time anyone gets sniffy about "cultural appropriation", such as when a white person puts on a yukata (see below) I want to throw that right back in that person's face. "If you don't like white people wearing cornrows," for example, "then stop using indoor plumbing and antibiotics and your iPhone 11."

Meanwhile, this isn't meant to denigrate the actual contributions women and minorities have made to western civilization or anything like that. Just, perspective: there's no Hedy Lamarr without Nikola Tesla. No Tesla without Maxwell. And so forth.

I would have liked to have seen a picture of the person who made the accusation of cultural appropriation. Fiver says it was a fat and ugly white woman.

Went through the canned goods in the cupboard and found that we had cans of stuff dating back to when Mom was alive. Loath to throw any of it away--the cans are all intact and in good condition--I instead boxed it up and put it on a shelf downstairs for emergencies. If (God forbid) things got dire enough, we'd be hungry enough to eat them with our beans and rice, even if their flavor isn't the best. And canned food stays edible for a long time; I'd wager the food in them would still taste just fine.

So we've hit mid-November, and I know two people born on November 15th. Happy birthday on Sunday; you know who you are.

My wife came home from a hair appointment with perfectly colored hair. I'm not kidding, it was the Platonic ideal of her hair color. She is naturally a brunette but has had it some shade of strawberry blond long enough that I have pictures of her in her junior high softball uniform with strawberry blond hair.

She says, "Don't look at me! They were out of (some product)" so her hair wasn't styled perfectly.

I turned around in my chair and looked at her, saw the hair color, and could not look away. She got flustered. Heh.

"YOU'RE SEXUALLY HARASSING YOUR WIFE," screeched some harridan feminist blob who lives with 348 cats and hasn't had a date since 1981.

The thing I like least about my job is the conference calls.

In just about every case, it's an information dump, so all I'm doing is sitting there and listening to someone talk about this and that and the other thing. When it comes to instruction, I'm not an aural person; you put me in front of a speaker and make me listen to someone talk and I'll be asleep in about two minutes.

If I am there to talk to others, no problem; there have been a handful of conference calls where I'm there to give input, and I have no trouble with them.

Actually, I have the same problem with computer training. Make me watch a video and I'll be asleep in minutes. Let me turn off the audio and read subtitles, though, and I'll be fine. Usually because the video imparts no useful information and is just there to be something for the audio to play in front of; and the audio is always dead boring.

Look: here is a badly-animated cartoon of a person presenting information while a voice talks about the words on the screen!

Here is the Fungus, snoring in front of his computer!

It's like the worst PowerPoint presentations, where the person who is giving the presentation puts up a slide, then reads it, only instead of a real person, it's a cartoon.

Oddly enough I don't have that problem when I'm in an actual meeting where someone is presenting something, live. But they don't really do those anymore in THE AGE OF COVID!!!

Doesn't anyone else remember that Obama invented the "office of the President-elect" in 2008? Or did I shift between parallel universes again?

I think the right is noticing it more here because this time, it's Biden trying to make something official out of his most unofficial declaration of victory.

Does anyone have an actual real certified tally of electoral votes? Because I don't trust any of the news media to give me the real, rather than "projected", numbers. Six states have yet to certify their elections; neither candidate has enough electoral votes to be the President-elect. (Anyone who pipes up with "Biden won, get over it" receives a failing grade in "reading comprehension".)

Anyway: I do remember some people scoffing at Obama's "office of the President-elect". "That was twelve years ago, B-ko!" I don't know why I bother.

Won't the pilots then have to wear goggles to protect them from Rayleigh scattering? This is a point I don't really touch on in any of my SF stories where multi-megawatt lasers are being used in combat, but in atmosphere you really need to protect your vision against laser radiation.

I mean, there was that guy who built a 200-watt blue laser, and when he switched it on he was wearing goggles and a welder's mask to protect his sight from it. The camera image showed the thing emitting a shaft of light that a lightsaber would envy.

200 watts' worth of light is a lot of light. These guys are talking about fifty kilowatt lasers.

Fifty kilowatts is a good number for a laser weapon. I don't know how much power you expend to make 50 kW of light, but it for damn sure isn't going to run off of "D" cells, and no matter what frequency you use, the Rayleigh scattering will make it bad for anyone with unshielded eyes in the immediate vicinity.

(No, can't use a maser instead, because instead of blinding people you'd cook them.)

Woke up around 4:30 AM and was wide awake, so I finally did as I've been meaning to and dug out the external hard drives.

Lots of anime there. Stuff I forgot I had, and so forth. One drive, the interface (I hope it's just the interface) died, so I can't see what's on it. I'll have to pull the drive out of the enclosure later and use the combo hard drive interface to check it out.

It occurred to me that with the onset of autumn, and the impending winter, Harbor Freight might just have those motorcycle lifts in stock again. Hmm....