Biden's been president for four days and already we're getting the schadenfreude by the ton.

Many of the people who actually voted for him, on purpose, are shocked and dismayed that the Democrats lied to them.

Perfect example: Woman's husband is losing his job thanks to Biden's cancellation of Keystone XL.

The comments at that thread, lots of them start by saying, "Well, it's not really her fault...." but it really is her fault. It is not her sole fault--there are millions of others who share in her culpability--but it is her fault. It's the fault of anyone who voted for Biden, who supported Democrats, and who believed the media when it said the election was stolen.

Kurt Schlichter gets it right. "All you people screwed by Joe Biden who voted for Joe Biden can at least rest assured that you won't have to endure any more mean tweets by President Trump. Well done."

Anyway, learn to code, or something. The union leaders, who are shocked and dismayed that Biden is signing executive orders that put their people out of work, are not geting a hell of a lot of traction.

Well, that's how it is, you see: you guys served your purpose and helped Biden get elected. But China is who pays the bills in the Biden regime, and China doesn't like an America which is energy independent, so...anyway, just be sure to pull those levers for Democrats in '22 and '24? Oh! And do keep supporting and endorsing Democrats, because not all of us are in on the China gravy train, particularly at the local level. Okay?

How does it feel to be useful idiots, union goons? Why, they've never been so insulted in all their lives!

We move on: Advice Goddess Amy Alkon bemoans the fact that men are allowed to compete in womens' sports.

"The fastest female sprinter in the world is American runner Allyson Felix, a woman with more gold medals than Usain Bolt. Her lifetime best for the 400-meter run is 49.26 seconds. Based on 2018 data, nearly 300 high-school boys in the U.S. alone could beat it."

That's a quote from Abigail Shrier's piece in the WSJ about Biden's executive order that "rigs competition by requiring that biological boys be allowed to compete against girls":

What's wrong, Amy? "OrangeManBad", right? You hated him from the moment he declared his candidacy, and you really wanted him out of office, so why are you complaining about this? Isn't anything preferable to having Donald Trump as President?

Suburban mommies who voted for Biden whose daughters won't be getting sports scholarships--too bad, so sad. At least they got to signal "OrangeManBad", right?

But you feminists were all so upset that Donald Trump was President, so why are you so unhappy? I mean, you voted against Trump, right? Who did you think you were voting for? Did you honestly think the Democrats would be happy just to have Trump out, and would not immediately undo all the things Trump did while in office? Did you not realize that the things Trump did, of which you privately approved, would be undone by a democrat administration the instant it could?

This is the kind of thing that I absolutely detest: people voting who have absolutely no idea of what's going on. If you don't care to educate yourself on what effect your vote will have on your own interests, then do not fucking vote.

Similarly, I have no respect for people who don't know who they're voting for by election day. I remember, in 2000, on election day, listening to some of the women in the office at Rockwell saying, "I haven't voted yet, but don't know who I'm voting for," and I wanted to turn around, stand up, and scream at them, "THEN DON'T VOTE, YOU IGNORANT ASSHAT!" For fuck's sake, at the time I could respect someone's decision, who was going to vote for Gore, but not knowing who you're voting for ON ELECTION DAY is utterly inexcusable.

I say "at the time" because, since 2000, the democrat party has made it abundantly clear that a vote for them is a vote for an unaccountable oligarchy.

Biden made drugs more expensive, too, so I hope you don't need an EpiPen or insulin to stay alive.

By the way, another nice thing Biden did was to restore ObamaCare's individual mandate, so you get penalized if you don't have insurance again. But hey, it's a "tax", right?

Karl Denninger has not appeared in these hallowed pages for a while because he went off the deep end about COVID, and kept doing it even as the democrats were stealing the election etc. But now he's enumerating Biden's campaign lies.

So about hating the Orange Man so much you voted for the other guy, even though you knew he was a senile, lying dirtbag, had a 40 year record of ****ing you up the ass as a lawmaker, including screwing people of color with so-called "criminal justice reform" and who has a son that loves hard drugs and, it appears, may like abusing kids too including ones in his own family yet instead of turning him into the cops and sending him to the slammer, justly so, he apparently used him as a conduit to get rich.

I have no sympathy for this woman, either. She's an admitted Sanders supporter. Her mittens are what Sanders is wearing in all those memes: 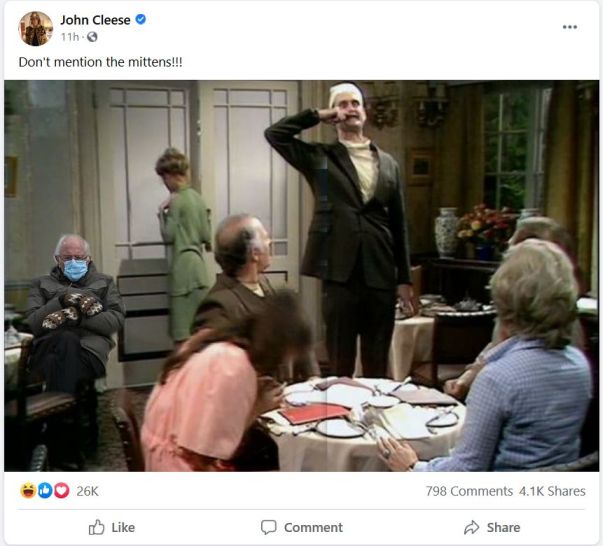 ...and she's complaining that she can't sell the mittens any longer because of what federal tax laws did to her.

Amazon doesn't want its workers to vote by mail to unionize because apparently, when people vote by mail, the risk of fraud is too high.

Well, slap my 'fro and call me CornPop! Really?

"Just think, if we'd have had 'Net Neutrality' in the '90s we'd have the worlds fastest dial-up internet." That's a comment at that thread.

That's coming next, sometime after all right-of-center speech is redefined as "sedition", I expect.

I said that the democrats are using the National Socialist Worker's Party playbook, but everyone tells me I'm just Godwinning myself. Well, I'm not the only one, anyway.

And of course antifa is still trying to distance themselves from the democrats so they can be used again in the future.

The obvious lesson is not to surround a car and threaten the driver but they keep doing it. Saw a bit about antifa overturning a car and then preventing emergency services from helping the people inside. If you bitches surround me and start rocking my Jeep, I'm engaging 4WD and gunning it, and if you don't get the fuck away it'll be "bowling for assholes" all the way to the end of the block.

My wife was shocked and dismayed to hear, on the radio, handy tips for dealing with the "necessarily skyrocketing" number of carjackings in Chicago. Then she wonders why I really, really don't want to go into the city for any reason.

Anyway, neither of us is driving anything anyone would particularly want to steal, except maybe in an emergency; my crate is rusty and old enough to buy beer, and hers is a nondescript Toyota econobox. I take some small comfort in that.

This year, so far, feels kind of like the late 1970s to me. I don't know, but it has this kind of ethos, or vibe, that reminds me of the first quarters of 1977, 1978, specifically. I was a kid and wasn't really paying attention to politics but there's still this feeling I can't really shake.

To be sure, this time in 1977, at least we didn't have the concrete certainty that Carter had stolen the election and was going to ramrod communism up our shafts, unlubricated. Even so.

Well, I suppose we just have to push forward.
Collapse