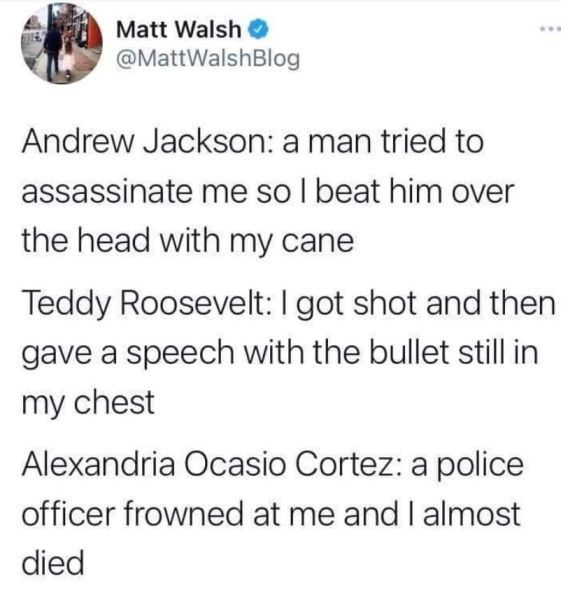 She wants her cultists to report anyone using the hashtag #AlexandriaOcasioSmollett, which is hilarious.

And she's going to open her huge yap and remove all doubt, too. Nice of her to have her lies entered into the congressional record. I mean, it's not like she's committing perjury or anything--if that were perjury we could jail the lot of them--but when it comes time to primary her ass, her opponent can make a great deal of hay out of this, I think.

Why doesn't CNN give the "investigators" the names of their witnesses?

The media -- especially CNN -- has been "reporting" that Sicknick was murdered for a month. Hit on the head with fire extinguisher by a "MAGA terrorist," they "reported.'

As they've "reported" this, obviously they have this from first-hand eyewitnesses. At least two witnesses to confirm a fact.

So all the authorities have to do is ask CNN who their two first-hand eyewitnesses to this incident were.

Unless... CNN has been lying and spreading twitter rumors and second-hand claims from hysterics like Alexandria Ocasio Smollett, and pretending they had verified the facts of the matter.

I don't watch CNN. I don't even want it turned on in this house. They're nothing but liars.

The thing is, FBI agents aren't cops. They're lawyers with badges. They do perform a law-enforcement function (when they're actually doing their jobs and not doing political dirty work for the democrat party) but the educational requirements to be in the FBI are very strict.

I don't know if the FBI is having trouble recruiting people, but I'd wager they don't, because those guys aren't paid peanuts, not for all the education they need to have, and of course it's a left-wing outfit.

Ace's translation is correct. Trump basically told them to go fuck themselves. Heh.

I've been saying this for years. The left acts like it's being oh-so-edgy in complaining about the US military, but I've wanted the US out of all those foreign shitholes for a very long time.

Today's "United States" military--put as many quotation marks around that as you feel it needs--is little more than an HMO for gays, girls, and trannies. You know that famous bunker scene in Downfall, where Hitler is moving all those imaginary divisions around? That's what our generals do all day. That's all they can do, since they know better than anybody that the actual Wehrmacht, the one defending the last few blocks of Berlin in April 1945, could clean "our" fucking clocks in a fight right now.

A lot of our so-called allies have agitated for the US to leave, for decades, knowing that we would not.

This would have the additional wonderfully beneficial effect of letting those smug little cheese-sucking fuckers in the EU get what's coming to them. Ditto the South Koreans, Our Greatest Ally in the Middle East, and everyone else who has been freeriding on the Nation Formerly Known as America since the middle of last century. Butch the fuck up, you whiny little weasels, or start learning Russian. Or Chinese, as the case may be. Ever heard the phrase "be careful what you wish for"?

I just keep thinking about that city in Spain, which agitated and agitated for the US to pull out of its nearby military base. Only when the soldiers left, they took their money with them, and the town suffered a sudden and very acute economic contraction.

Because we're now going to get the democrat boot stomping on our faces, the military will suffer, and it will suffer worse than it did during the post-Vietnam era. As the democrats socialize medicine and expand the welfare state, the military's budget will wither, and we'll find ourselves unable to support the bases in far-flung corners of the world. Those countries will then have to defend themselves and do it on their own dime.

So when I came home from work for lunch, it was merely cloudy. When I left home to go back, it had started snowing, hard. 1/4 mile visibility--less--and the roads were covered, and it had only been snowing for about ten, fifteen minutes. I drove back to work at 35 MPH. It continued to snow, in fits and starts, all the way to quitting time.

When I left work, it was snowing like that again, but the roads were covered and icy, so I drove home at 25 MPH.

Boomers can't believe that younger people don't like their music. Vox riffs on an article where a Boomer waxes confounded as to why the music he likes doesn't catch on with younger folks.

"This was the dawn of two decades which would usher in some of the greatest music ever made and the greatest lyrics ever penned," he says, which is a display of a startling level of ignorance and arrogance. "I think Beethoven and Mozart and Wagner might have a little something to say about that," Vox says, correctly.

Someone in the comments said something about the Rolling Stones having "polished execution" but one of the things I have always detested about that band was how ragged their sound was, as if they hadn't practiced together before recording. Led Zeppelin, too--they sound like teenagers rehearsing in a garage.

Look, I absolutely love the music of the Alan Parsons' Project, but I would never claim it was "the greatest music ever made". I wouldn't have made that claim even when I was a shit-for-brains teenager. I would have argued the point with anyone who did. It's not.

Bach, Handel, Beethoven, Mozart, Lizst, Brahms, panties--I'm sorry!--Ravel, Rachmaninoff...there's a long list of classical composers to whom the Beatles aren't even a footnote.

If you need an explanation for why I interjected "...panties--I'm sorry!--" this will explain it. You'll only have to watch about 18 seconds, too.

Mrs. Fungus wanted teriyaki chicken. I made some stir-fry that incorporated teriyaki sauce. It was not really teriyaki enough for her but she still liked it, and I had a pretty sizable helping myself.

Not exactly the ideal fare for a cold winter night, but WTF, it's food, and there'll be leftovers for lunch tomorrow. More, I cannot ask.
Collapse