Chief Chuck of the Cherokee Chastises Jeep's Choice of Cherished Name. Yes, the Chief of the Cherokee is named Chuck Hoskin, and he's calling Jeep out because they named their vehicle the "Cherokee", and in Fortified America you can't use indian names on things because it's racist.

I suppose one good thing about Biden being the alleged president is that no one is ever going to try to convince us that he is a "great orator". They only just managed to sell that bullshit with Obama because he didn't truncate his gerunds or mix verb tenses when he spoke extemporaneously, but whenever the teleprompter failed he became the SCOAMF, even so. A "great orator" is someone who can deliver a real barn-burner completely off the cuff, without liberally peppering his speech with "uh" "ah" and "er". Obama couldn't do that, and his speeches were dead boring even with the teleprompter.

But Biden? No. The press can't sell this one.

All of these are good suggestions but NOT MIKE PENCE.

This is the mindset of Joe Biden: 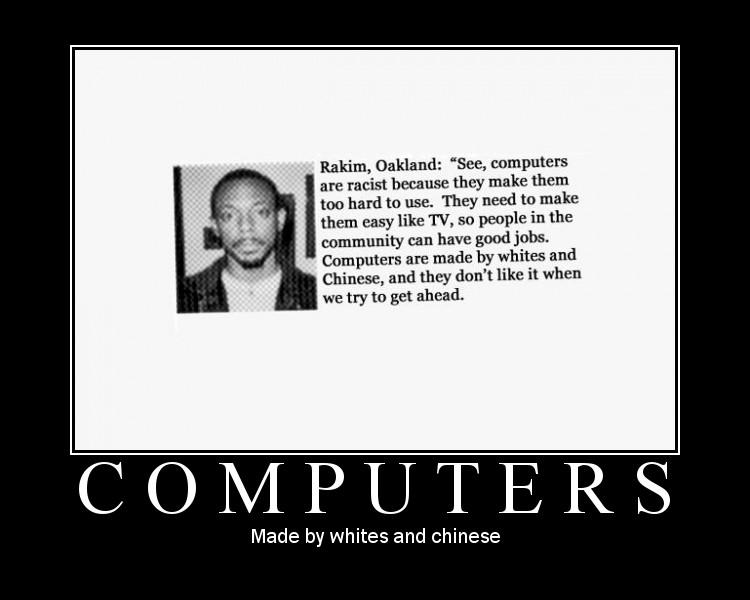 Blacks are perfectly capable not just of operating computers, but building and repairing them. The field service engineers that maintain our file servers are black. The guy who trained me in Houston is black and he knows his stuff, let me tell you, and I aspire to be as good as he is.

Covidiocy has put a fork into most of the fields they control completely. As in, they're done. They might still be shambling on their feet, but it's like a turkey running with the head cut off. They're done. They had maybe one more generation--10 or 20 more years--to shamble gently into irrelevancy, but now if they--trad pub, Hollywood, the news, etc.--have five years remaining to them, I'd be shocked.

And it's strong odds their political shenanigans, obvious "occupation Junta", attempted purge of the armed services and ridiculous war on largely imaginary "white supremacy" is only going to accelerate things.

Since they couldn't find reality with two hands, a seeing eye dog, and sonar, what they're doing is actually destroying the remnants of the things they like

All the lock downs, covidiocies, green new deals, and great resets are just them covering their ears and screaming "make the past come back."

It ain't gonna happen. And they're not going to win, for one because their ideas have no basis in anything real, including and up to "what humans eat."

There will be a great reset. Not the one they want.

It's not going to be a lot of fun. You can't eat Schadenfreude, damn it, and a lot of people on both sides are probably going to die. But eventually, we do get our country back, maybe better than before.

This is a pretty entertaining idea.

The "scandal" surrounding Cuomo is also interesting, and a possible very nice cause for hope. It's COVID, of course, and while we know that the Dems could care less about all the old people who died as a result of Cuomo's policy--think of how much the State will save in Medicare, plus most of them were White--this might be a pretty good indicator that even the Democrats are finally cottoning to the fact that you simply can't run a nation this way. The Media have lots of practice spinning shit economies--how many "recovery summers" did Obama get, seven?--but not even they can spin "50-75% of small businesses permanently shuttered" as some kind of economic win for Uncle Joe Stolin.

The Media are desperate to hand China Joe a big splashy victory in his "first hundred days." But since he's a Democrat, and terribly stupid, and illegitimate, everything has gone straight into the fucking toilet. See where this is going?

I do believe I do.

If you need to go to the hundredths digit--or even farther--to find the fatalities, then the disease ain't that damned bad. The Wuhan Flu is the flu, damn it.

Well, we all somehow managed to survive Tuesday. On to hump day.
Collapse