I decided to take a walk "uptown" and go have a look at Cruise Night. Looking over the cars there I realized just how much work I have to do on Buttercup. But it's fine to bring a "work in progress" so once I can get the thing running and tuned up--

Anyway, took a route to the town core that I have walked lo these many years, so that sidewalk is intimately familiar to me. And as I walked towards the event, I saw this: 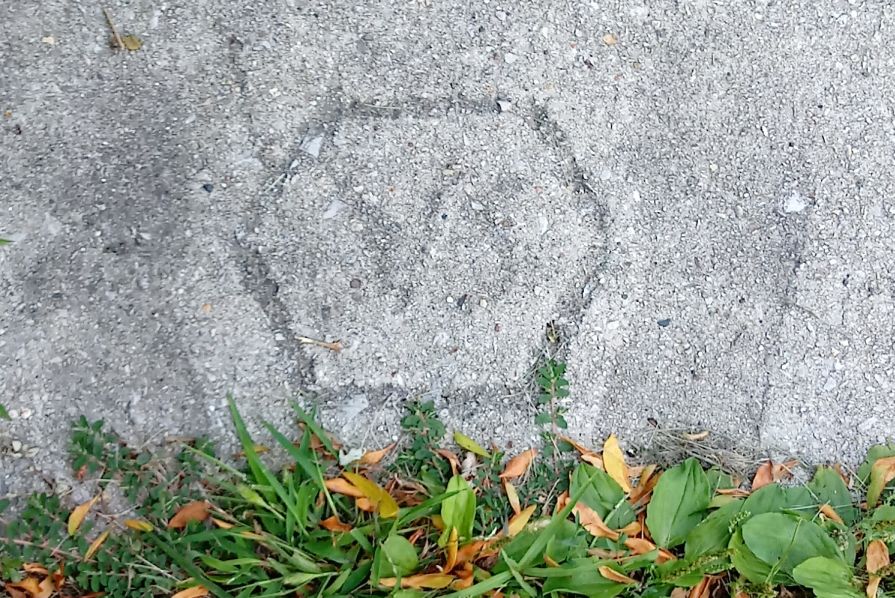 That mark was made in 1982 by me and one other person. I'm not sure which of the two shoeprints is mine (I think the left one?). A couple of days later we saw that local asshats had tried to deface our graffito, but to my surprise some four decades later (not quite) it's still there and the attempts at defacing it did not notably change it.

Continued along my route and saw the other graffiti from that time period, when the phone company was running new cable and was therefore tearing out, and then replacing, the sidewalks after they had run the cables.

Anyway--"Julie '85" was one of them; I know who Julie was--she was in the same class I was in. Some wit had scrawled "Do Bongs" a few paces farther on; it was a girl's handwriting. Might have been Julie, considering, or one of her friends; but as I walked onward I came across, in the apron of a driveway, "I love Pam"...and today I wondered if he still loves Pam, or was it a momentary infatuation of adolescence? There was at least one Pam at that high school.

There are a lot of people who sneer at those who choose to remain in the town they grew up in. As far as I know only two other people did so; the rest of my classmates are strewn to the four winds. I don't feel poorer for their absence, let me tell you, though there are a few past friends I'd like to reconnect with now that we're all a lot more mature. (Me especially.)

But even in my wildest dreams, I did not suspect the future that lay before me. I would not have planned it; but here I am, and it's for the best, I think. I would not--now--want any change to how things went.

Woke up maybe 5-ish this morning and my back was killing me. I could not find a comfortable sleeping position.

Got to work, suffered for a little while, then gave up and had 800mg of Ibuprofen.

I mean, gone. For the entire rest of my day I was able to function normally, without walking like an octogenarian. That's why I was able to walk "uptown" to have a gander at the cruise night. I don't really understand it, but I'll take it.

Oh, I know the generics: ibuprofen is a non-steroidal anti-inflammatory, and obviously the source of my pain is some kind of inflammation, and 800mg is more than enough to get me to the place where ibuprofen's NSAID properties kick in. So I actually do understand, kind of, why my back stopped hurting entirely after I took the pills.

Doc said I could take up to nine tabs of the stuff per day for my tennis elbow, so having four in the morning and four at night (about 12 hrs apart) should not be a problem for me, at least not short term. But if this back pain goes on for too much longer I'm going to have to go see the doc about it.

This is my body's "check engine" light coming on, I guess.

Now five of the Texas fleabaggers have tested positive for the Wuhan Flu. Their literal flight from Texas is now officially a "super-spreader" event. And of course Commie Harris is still refusing to quarantine. Well, heck, if she passes it to Biden, she gets his job that much sooner, am I right?

Meanwhile, a majority of Americans don't think she's qualified to take over for Biden when the Gangster Party finally gets rid of him. Look, guys, let's be honest: Biden's not qualified, either. You think Harris is going to get to run things on her own stick? Ha! Ha! Ha. No, Harris will do what she's told to do, exactly the way Biden is, or else...well...that Wuhan Flu kills people, don'tcha know. That'd be a massively parallel propaganda win for the Gangster Party, let me tell you, esp. since I doubt she'd be allowed to nominate her VP before succumbing to the dread coronavirus.

Well, Black Widow is a bust. And I'm not surprised. The Marvel Cinematic Universe (MCU) peaked at Infinity War and it's all been downhill since then. Haven't spent any money on seeing the TV series (WandaVision and Loki) but the reviews I've read of them are 100% "meh" territory, so I don't feel any need.

BW--let's face it, BW dies in Infinity War (or was it in Endgame?) in such a way that there ain't no comin' back, and any movie about her is necessarily going to be overshadowed by that fact. And I never really understood the point of the character (except "Scarlet Johannsen in a catsuit") so I'm not exactly interested in seeing the movie in the first place.

Overall, the wokeness killed the MCU, starting with Captain Marvel. Or perhaps with Black Panther? I'm not really sure, to be honest. I don't care. I'm a casual consumer of these movies; I like good stories, and the stories we've gotten since IW came out have been...lacking. And getting worse as time goes by.

Doctor Strange was good, though.

Dinner tonight was on Pizza Hut.

Which is to say: I signed up for their points thing some time ago, and had nearly four hundred points saved. Today I determined to get one of their pizzas for dinner; and since the nearest one is within the Fungal Vale (next to the cruise night, in fact) I decided I'd go pick it up rather than have it delivered.

Well--"meat lover's" pizza on their thin crust, $21-something with tax...only it turned out I could redeem 300 points and get it without having to pay anything for it. I mean, my cost was zero, not even sales tax. Of course, I actually paid for it in increments over the past few years, since I had to spend money to get those points, but redeeming the points means getting a pizza for no additional money out of my pocket, so that's close enough to "free" for my purposes.

Why, no, I don't have a problem with being pedantic; why do you ask?

Anyway, the back is hurting again, which means I got something like 9-10 hours of relief from the pain before I started having trouble again. That's not too bad.

I'll probably take the next dose around 9-ish, maybe an hour before bedtime. Then be sure not to take any until 9-ish tomorrow.

The sky has portended hot weather for the past few days. Like, this morning: I left for work and it felt sticky outside, and the sunlight had an orange cast to it, and the sky was brassy. That generally means heat wave but it wasn't altogether unpleasant outside, and my little walk to and from the cruise night was not uncomfortable. Now the western sky is all pink and the sun is orange, which just hollers "IT'S GONNA BE HOT TOMORROW". It's definitely the middle of summer now, but it's on the pleasant side of hot.

I don't think we're setting up the pool this year. Doesn't seem to be much of a point to it, with July 2/3 over.

Anyway, I've kind of had a hankering to write something. It'd be nice if I could. But right now I'm tired from my day at work and I'd like to do a little running around in Azeroth, killing monsters.

Robby Steinhart, dead at 71. He played violin and was a lead vocalist for Kansas.