Get vaccinated, get your booster every six to eight months, and take two of these pills every day and you might live through your next Wuhan Flu infection.

The companies who came up with these vaccines have made a hell of a lot of money on them, and they don't want the gravy train to end. There's no profit center like giving a person a shot and then making him take pills to offset the lethal "side effects" of the shot for the rest of his life! It's a captive customer base!

And of course if anyone gets uppity you can just cut off their supply of pills. Yes, yes, you lose a customer that way, but everyone else is then encouraged to play nice and keep buying those "keep me alive!" pills....

As recently as one year ago, I would not have been at all serious about this theory. Today, I am half-serious.

So, saw something in a collection of right-wing memes that made me shake my head.

"Mini 5G cell tower," one circle on the picture is labeled. The other circle is labeled, "Radiation warning sign located over 20-feet high where nobody (except for a giraffe) can read it".

Guys, it's a radio transceiver. It's not a mind-control device, it's not plutonium. Let me explain what's actually going on.

According to a 20-second Internet search, I found that 5G cellular communications run on carrier waves of "24.25 GHz to 52.6 GHz". For perspective, a microwave oven runs at about 2.45 GHz, and that frequency was selected because that's a frequency that water absorbs fairly readily. Since the point of a microwave is to heat food, and most food is not bone dry, that works fairly well.

Remember that this effect of microwaves was discovered by a guy working with a microwave transmitter, and it melted a candy bar he had in his pocket.

The thing is, a 5G cell tower emits microwave energy at anywhere from 250 milliwatts to 120 watts of power. That's what's coming out of the antenna. If you're standing too close to that antenna when the transmitter starts running at 120 W, you could get burned by it, rather severely. This is actually an issue with lower frequency transmitters, too; do you think that you'd suffer no ill effects standing next to an AM antenna emitting 50,000 watts? Are you sure enough to risk it? The higher the frequency goes, the more likely your body is to absorb some of the radiated energy, and that can be bad for you.

However, there is this little law about the radiation of power called the inverse square law, and it states that when you double your distance from the radiating power source, the intensity is cut to 1/4 of the closer figure. So if you're on a tall ladder standing right next to the antenna, it's 120 watts of microwave radiation, but at ground level it's considerably less (depending on a number of factors I shan't go into here).

The point being that--if you're on that tall ladder--you're exposing yourself to a potentially harmful level of microwave radiation; but at ground level, you're safe.

Cell towers don't cover a very large area, and digital telecommunications transceivers can deliver clear audio at a surprisingly low emitted power. That's one of the big advantages of using digital (rather than analog) radio in the first place. Analog, you need to punch through the interference. Digital, as long as the receiver can tell the ones from the zeroes, you're golden.

The whole reason a crystal radio can work at all stems from the fact that a transmitter is essentially a big lamp.

Granted, it's not one that emits light in the visible spectrum. AM radio is pretty far down the scale--frequencies measured in the hundreds of kilohertz--but it is electromagnetic energy that's being emitted. The same way that we can power a calculator off the light from a desk lamp, a crystal radio is actually powered by the AM radio waves it receives.

Friend of the Fungus StxAR bemoans the stupidity of our government's banning of useful chemicals.

I had no idea they'd already started using isobutane as a refrigerant, because of course it doesn't cause global wamring the way hydrofluorcarbons do.

Yes, Red Asner died. I don't have anything. I'm not celebrating the death of that old, super-rich communist; but I'm not lamenting it, either.

I belatedly realized that when metal starts to glow, it stops reflecting light: 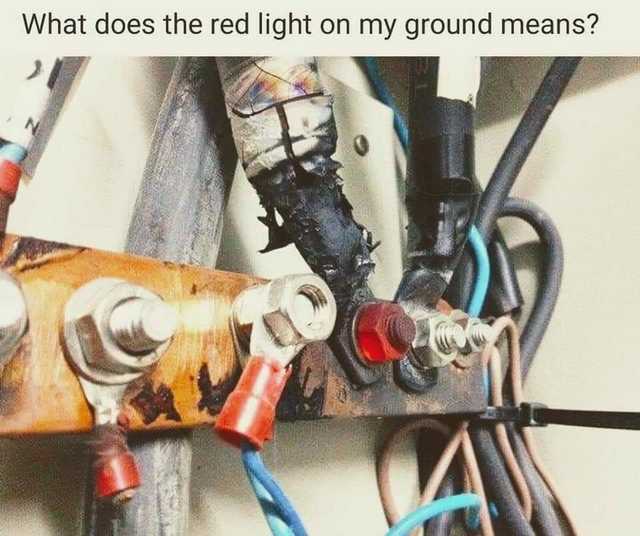 The "red light on ground" is, of course, that particular grounding stud glowing red hot because so much current is flowing through it. I was looking at that picture and realized--gee--red-hot metal doesn't reflect light!

Of course not; it's emitting light. Right?

That's only part of the story, though! When a photon hits an atom of metal, there's a complex dance between it and the electrons orbiting the atom's nucleus that result in the photon bouncing off. The really interesting part is that if heat is applied to the atom, the energy states of its electron shells change, and if the atom absorbs enough energy ("red hot") the photon can't be reflected.

A red hot piece of metal emits photons of a certain energy because electrons are constantly being pushed into higher states by the heat, then dropping back and emitting photons. This constant zigzag between states keeps the electrons from doing the photon dance that reflects them. So the steel is the same shape and composition that it was before it got hot, but because it's so hot, reflection just doesn't happen.

I felt smarter after realizing that.

Lots of physics in today's post! Gotta love it!

Well, two days left in the week before the 3-day weekend. It's nice and cool tonight so we're ventilating with outside air, finally.

Had an interesting thought in response to a Larry Corriea discussion of Ellen Ripley in Aliens.

All the woke morons who bark about how there were no Strong Women in sci-fi before they came along to suck all the fun out of the universe don't know Ellen Ripley (or they do and choose to ignore her) but that is how you write a strong female character.

And it occurred to me: the woke version of the strong woman is such by virtue of her mere existence. Carol Danvers, "Captain Marvel", is strong because she exists. Rey from the latter three Star Wars movies is a "strong woman" because she exists. Neither character ever has to grow into the role; she doesn't have to struggle or learn or strive to be what she is. She just automatically wins, because she's female and strong.

But Ellen Ripley is strong by virtue of her character. She doesn't want to go back to LV-426; when Carter "Yuppie Weasel" Burke asks her to go, she refuses, because the very last damned thing Ripley wants is to risk running into one of those xenomorphs again. She's not strong at all, not then; she's weak and afraid.

But she changes her mind, decides to go, and then has to overcome her fear when the whole mission goes south--and by the end of the movie she is even stronger and more capable than she was in the first movie. The Colonial Marines are listening to her, and doing what she tells them, even though Corporal Dwayne Hicks is supposed to be in charge. Her journey is a hero's journey.

Compare and contrast with the approximate plot of The Force Awakens:

So, it's looking as if Hollywood's banking on the Chinese market is failing them. The entertainment being produced by Americans is falling flat on its face, for some reason, and suddenly the numbers from China aren't really all that great.

Looks as if some useful idiots got played.

Grocery stores are very subtly not being fully restocked. It's not bleeding obvious as it was last year, but it is happening, and it's kind of worrisome. And frustrating.

Well, had a pretty tiring day. I suppose I ought to start getting ready for bed.
Collapse