Words to the effect of, "Laptop and phone will be retrieved by a corporate lawyer when the police are finished with them."

The short form is that the now ex-employee thought it would be fun to hide a camera in a bathroom at his home, with predictable results.

The company fired him posthaste, tickets showed up in my queue today, and I seriously wanted to take a shower with weapons-grade iodine and maybe sandpaper after reading them. My job is to collect the hardware and check it back into inventory, but we're probably not going to get that stuff back anytime soon, and I'd wager it won't be in usable shape since evidence lockers are not usually very kind to electronics.

This is the kind of scenario that I think everyone in IT has to deal with, sooner or later. I'm just glad it wasn't me making the call: "Hey, boss? I found this and that on so-and-so's old laptop...." That guy's life is effectively over now; better that one of his victims reported the crime.

The hell of it is, this wasn't some low-level guy. He was like 2nd or 3rd in command at his site.

Man, what a dumb thing to do.

So, today I saw some stuff on-line about the Wuhan Flu vaccine being regarded, in some circles, as a "luciferian initiation". That may be, it was theorized, why so many people in power have such a hard-on for making people take it.

The thing is, intent is a really, really huge part of anything like that. Okay, so let's say that the shot is a "luciferian initiation", and our elites cackle with glee and rub their hands together thinking about all the Christians they're going to corrupt with it.

If you take the thing thinking that it's just to protect you from the Wuhan Flu, whatever other value it has is null and void. It doesn't condemn you to serving the devil. Evil has no claim on you, because you took the shot thinking it was just another vaccination.

On the other hand, if you were all "FUCK YEAH I'M GONNA RULE IN HELL" then yes, you're screwed.

You have to make a conscious and informed choice to turn yourself that way. No one can make it for you; they can't slip you a mickey. They can't hold you down and force you to take it; you have to choose it. If you don't choose the evil, if you reject it and they force it on you, then your hands are clean.

We get into a fuzzy area--at which point does duress turn into force?--but the simple fact is that if they held you down and "initiated" you into their cult, it would be meaningless. But if they make your life hell until you say, "Okay, I'll sign," that's you choosing it.

Given all that, I don't think the vaccine is anything of the sort. I think it's a gateway to total control of the population, but it's not any kind of "luciferian initiation". It doesn't have to be. All it has to be is a way for them to incrementally get people to accept subcutaneous RFID tags, such that the government has a serial number indelibly linked to every person. And then people really won't be able to do anything at all without the government's permission; and because that RFID tag will be your ID for everything, no matter what you're doing, you'll have to have it scanned.

Buying a loaf of bread? Your RFID tag acts as a debit card which can't be stolen. Oh, and by the way, no one accepts cash any longer, so you need that RFID tag in order to buy anything. When you go to work, you'll clock in and out by scanning your tag. The government will automatically know how many hours you work every day. When you go to the store--or any business at all--you'll have to scan your tag to prove you've been vaccinated before you can enter, so the government will be able to track your movements pretty closely. Of course, because your tag is also your debit card, the government will know how you spend your money. Accessing your computer will require that your tag be scanned, so they'll know what web sites you visit and what you do on-line.

I could go on, but I don't think I need to. People who say, "Your life isn't that interesting!" are missing the point. The point is control--any time anyone does something even the slightest bit inconvenient for government, all they have to do is to turn off your RFID tag, and you're fucked.

I do it all the time with computers at work: I go into Active Directory, right click on the computer, select "disable account"...and now that computer can't login to the corporate network, no matter what the user does. So until someone enables that account, that computer is a paperweight. You can erase the hard drive and install a new OS, but you can't use that computer to access anything on the network; and thanks to BitLocker, you need to know a 36-digit access key even to read the hard drive in another computer, so the data on that system is truly inaccessible until the account is re-enabled.

Now imagine the federal government having that kind of power over your ability to earn and spend money. Or just to go out for a walk.

That's why I keep saying and saying that if we let them put serial numbers on us, we'll be slaves. That's why I will starve to death in a cardboard box under a viaduct before I let them put that number on me.

By the way, did you know that there are currently some 700,000 enslaved people in Africa right now? 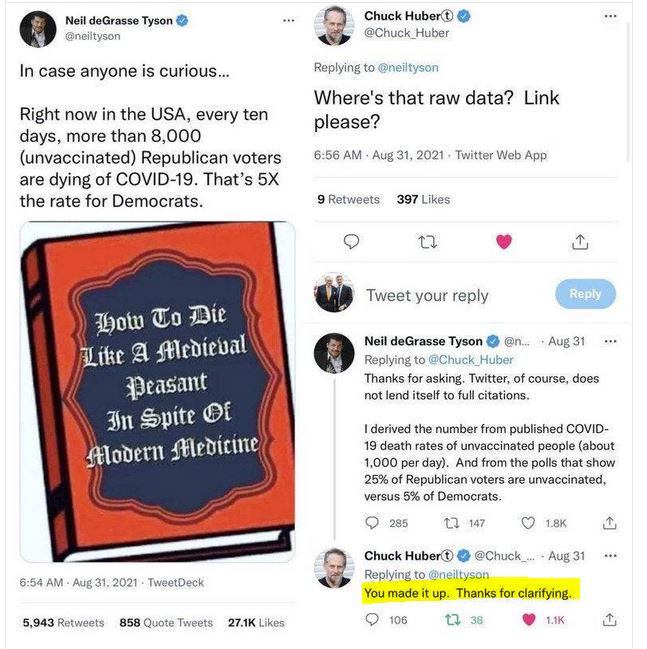 Neil DeGrasse Tyson wishes it were 8,000 Republican voters who were dying daily of the Wuhan Flu.

Paraphrased text from a savage meme: "'You're not a horse. Don't take horse medicine,' said the mentally ill man who had his penis cut off because he thought he was a woman." Whoever that poor delusional person was that Biden nominated to whatever post it was.

Let's go right to the money quote: "China is desperately short of crucial grains and oilseeds needed for domestic human and animal consumption."

Let's pretend that the supply chain disruptions we've experienced, in the trans-Pacific region, are due to China playing stupid games. Forget why--just pretend they're doing it. What does that mean? It means China's shooting itself in the foot...or, more correctly, the stomach.

When we tried to order a bucket of chicken wings from KFC, we were told "we don't have that." Supply chain disruption.

"Just in time" works wonderfully as long as nothing disrupts the supply chain...but if the government suddenly shuts down half the economy, guess what happens?

We are pleased to announce that after sixty years of being twenty years away, fusion power is now a mere ten years away.

As always, I will believe it when I can plug my toaster into it and actually heat Pop Tarts.

Today I managed to write most of a page of a story set in my SF universe (same one as AV). It's pretty close to "the beginning", meaning that it's set in the late 21st century.

The problem I was having was that I felt sick to my stomach for most of the afternoon. Other than the guy getting fired for perversion, I'd taken care of all my work during the morning, so afternoon was spent idling, mostly. I had a sick headache and my stomach was churning. Finally I went to the first aid cabinet and had a couple tabs of generic Pepto, which helped immeasurably.

I'd ridden the bike back to work after lunch, having pumped the tire up before departing; and when I got home, I checked the air pressure in the tire again: 10 PSI. It had been 28 when I left the house.

...so I'm going to take the front wheel off, either tomorrow or Friday, and take it to the nearby motorcycle shop to have the leak fixed. And while I'm there, I'm going to casually ask whether they would do a tune-up on a Suzuki, even though they're a Kawasaki dealership....

I forget what time it was when I woke up to hit the can in the middle of the night, but I checked the outside air temp and it was cool and dry. But I couldn't switch to outside air without waking up my wife, so I left the place set up to cool with AC. Oh well.

For laughs I looked up monitor arms, and found one for $26 shipped that might actually do, so I ordered it. It's supposed to be here next week. We'll see how it does.

Very, very similar to another one I almost bought that cost $60, but I then saw either the same damned thing with a different label on it, or an exact duplicate, for $10 less. That got me to looking, and then I found the $25 one.

Anyway, that's it for Wednesday, I guess.
Collapse